Laurie is an animal lover who enjoys observing, researching, and writing about both pets and wildlife.

The world is full of unique animals, some illusive, some beautiful and some that are just odd. Read on to discover these cool animals you may never have know existed for yourself!

The pig nose frog aka purple frog wasn't discovered until 2003. They are extremely rare and listed as an endangered species. This strange looking amphibian spends most of its life underground and only comes up to the surface for a few weeks out of the year to breed. Creepy or cute? You decide! I think he's adorable!

The kakapo is the only flightless parrot in the world and is nocturnal! Kakapos can live up to 95 years on an average and are indigenous to New Zealand. They are critically endangered with only 126 remaining. Efforts are being taken to help protect them. I think this adorable guy looks like a beaver with feathers! What do you think of this odd fellow?

The saiga is a is a critically endangered antelope. They have very poor hearing but excellent vision. It is estimated that only 50,000 remain in Kalmykia, Kazakhstan and Mongolia. Saigas form large herds that graze in semi deserts, steppes and grasslands.They can cover long distances and swim across rivers, but tend to avoid steep or rugged terrain. Saiga eat several species of plants, including some that are poisonous to other animals!

The golden snub-nosed monkey can only be found in the mountains of China. They can grow anywhere from 20 to 26 inches long and can live for more than 20 years. Their noses are short to protect them from frostbite in the cold temperatures of Tibet. Their poor little blue noses look like they're already cold! But they're amazing as are all animals at adapting to live in the harshest of environments!

The Spiny Orb Weaver, although formidable looking, is actually medically harmless. It prefers to live outdoors and only enters homes through potted plants being brought inside. They are commonly found in trees, bushes and outer woodland areas. They build thicker webs to prevent birds from flying into and destroying all their hard work. Her design reminds me of an inkblot test!

Keep your own pet spider! This habitat makes an awesome little home for tiny pets! (Only with adult supervision-please take extreme caution when collecting any 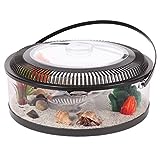 The "Sarcastic fringehead" is scaleless fish and can grow up to 12 inches in length. They get their funny name not from their attitude but rather their ferociousness as sarcastic can also mean cutting, biting and sharp! When threatened, they open their large mouths to appear more intimidating to predators or other fringeheads that get too close to their territory. This guy...maybe he's cute when he's not angry? If he looked like that and I happened across him, I definitely would run the opposite direction!

The nocturnal leaf tailed gecko is an amazing little creature! It has no eyelids, just a transparent film over their eyes which they keep clean with their tongue. Its camouflage is some of the best in the animal kingdom. With its twisted body, veins and coloring, it really looks like a leaf! The leaf tailed gecko originates from the rain forests of Madagascar.

The Golden pheasant is native to forests in mountainous areas of western China. Its orange "cape" can be spread out for display, alternating between a black and orange fan that covers all of its face except its bright yellow eyes. The female is much less showy as is often seen in animals, with a more dull brown plumage.

The Goliath Grouper is a large saltwater fish found primarily in shallow tropical waters among coral and reefs at depths of 16 to 164 ft. They can reach lengths of over 8ft and weigh as much as 790 lb! I would name him Squishy and he would be my squishy!

Sailfin water lizards are a group of large bodied lizards that are native to the tropical regions of New Guinea, Indonesia, and the Philippines. These water loving lizards are usually found basking in or near mountain streams. When fleeing danger, they run bipedally into the water until they sink and swim away. They're able to stay underwater for up to an hour at a time and are known to live up to 25 years in captivity.

Did you see an animal in this list that you'd never heard of?

If you enjoyed this list, check out some of the world's most beautiful birds!