Greetings! My last Lens Eric Carle: 5 Great Books plus 5 Great Activities was a hit and I now have the bug. So for your viewing pleasure here are 5 Awesome Alphabet Activities for Pre-K & Kindergarten Students! For many more great teacher resources, activities, and ideas check out my blog @ http://teachersland.com

The alphabet monster game is one of my favorite pintrest finds of the summer! What a fun way to practice letter recognition or letter sounds. I found the idea here: http://www.littlefamilyfun.com/2012/05/alphabet-mo... To make my version I took an empty bread crumb container and covered it with colored card stock-I chose blue because I have always had a soft spot for Cookie Monster. I then pulled out my craft box and made my monsters face from left over bits from past projects and I think he turned out to be so adorable! I luckily found a bag of foam letters that I forgot I purchased a few years ago and stuck them on my monster and made sure to place some between his teeth…letters are his favorite meal after all. I then took my x-acto knife and carefully cut a slot for his mouth so that my students could feed the hungry monster letters! I made a set of uppercase and lowercase letters to be used as monster food in Microsoft Word. I printed the letters, laminated them and cut them out to make them durable. To introduce the activity to my students I will be reading Hungry Monster ABC: An Alphabet Book by Susan Hyboer O'Keefe. 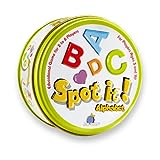 Crocodile Game: This game is so cute and another great find on Making Learning Fun! To make the game you need an empty Cascade Action Pacs container, construction paper, and wiggly eyes. The pattern and printables required for the game can be found @ makinglearningfun.com. To play you place the alphabet cards inside the crocodile and sing "crocodile, crocodile down by the lake, I'm going to reach right in and see what letter you ate." The student reaches in and grabs a letter and has to either identify the letter, the letter sound or both. If the student grabs a "snap" card they reach in again and pull out a different card and after three snap cards the game ends.

Alphabet Soup: This is always a small group pleaser! There are a few variations of the game. The one pictured is the simplest and usually how I introduce the game at the beginning of the year. To play this version you will need a mixing bowl, spoon, letters (magnetic or foam) and bowls. Place the letters into the mixing bowl and have the students help you stir the alphabet soup. Each student then gets a turn the dip a letter or letters into their soup bowls. After they dip they identify the letters, letter sounds or both. For variation two I use Alphabet Soup Sorters by Learning Resources, a mixing bowl, spoon, and bowls. To play you give each student a can of Alphabet Soup and have them identify the letter on the can. After each student identifies the letter on their can they empty it into the mixing bowl and then help you stir and mix up the soup. The students then take turns dipping out letter or picture/word cards and identifying the letter, letter sound, the word in the picture and the letter the word starts with. Then the students sort the pieces back into the correct container. 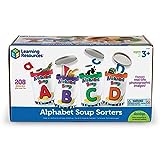 4 - Alphabet I Have Who Has

Alphabet I Have Who Has: A fun game for the whole class! Take index cards and write I have ___ Who has ____. An ex: I have A who has F and the student who has F looks at the letter on top of their card and says I have F who has B etc. The cards are easy to make or you could print out this free version from teachers pay teachers. Thanks Julia Powell for creating and sharing! http://www.teacherspayteachers.com/Product/I-Have-...

Alphabet Do-A-Dot/Magnet Pages: Another great free printable from makinglearningfun.com! I printed off upper and lowercase letters on cardstock and laminated them. Instead of using magnets or Do-A-Dot stampers to cover the dots I use aquarium rocks. The kids use tweezers to pick up the rocks and place them on the dots to work on fine motor skills. http://www.makinglearningfun.com/themepages/Letter...

How Did You Learn Your Alphabet?