Many dumb, crazy, stupid laws are antiquated and old-fashioned because they are based on the standards and mores of the past, particularly laws prohibiting work or other such activity on Sunday – the so-called blue laws. Others restrict the activity of women. Most are so crazy you have to wonder how and why they were ever enacted.

When I decided to research “dumb laws,” I found literally, thousands of them – some repealed but many still on the books, simply not enforced. Here are the 53 most hilarious dumb laws I found. Hope you laugh as hard as I did when discovering and writing about them. 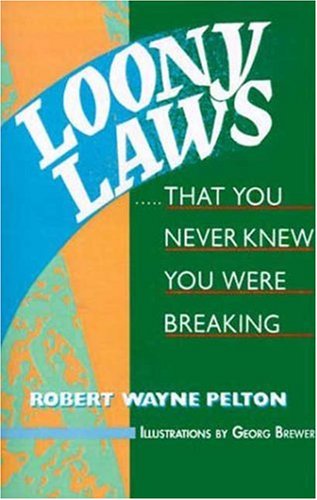 In Alabama, putting salt on a railroad track may be punishable by death. Could we call this condemnation by condiment?

In Fairbanks, Alaska, it's illegal to give a moose alcohol and it's also illegal for moose to have sex on city streets. This one makes a little sense. If you get the moose plastered, no telling what he or she will do – on or off the streets.

In Arizona, donkeys cannot sleep in bathtubs. Was there a lot of this happening?

There is a possible 25 years in prison for cutting down a cactus in Arizona. How about if I just insult it a little?

You are not allowed to suddenly start or stop a car in front of a McDonald's or any other drive-in restaurant in Little Rock, Arkansas. That law was probably sponsored by Chili’s, Applebee’s, Denny’s and all the other sit-down restaurants in town lacking drive-ins.

In Arkansas, a man can legally beat his wife, but not more than once a month. Ladies! You’re under no such restrictions!

In Denver, Colorado, next-door neighbors may not lend each other vacuum cleaners. How did that law get on the books in the first place? Was it supported by the vacuum cleaner companies who wanted to sell more vacuums and “clean up”?

You can be stopped by the police for biking over 65 miles per hour in Connecticut. If they stop you, they should give you a medal and a TV interview!

In Connecticut, In order for a pickle to officially be considered a pickle, it must bounce. Do Heinz and Vlasic know about this?

Penalty for horse theft is death by hanging in Florida. Does that mean hanging the horse?

If an elephant is parked at or tied to a parking meter in Florida, the parking fee must be paid just as if a car had parked there. This is not as far-fetched as it may seem. The Ringling Circus Museum is located on the property where John Ringling once lived in Sarasota , Florida . Porsches, Pontiacs, or pachyderms – no difference.

It is considered an offense to shower naked in Florida. Move to Indiana . You can take a bath there during the months of April and September.*

* Baths may not be taken between the months of October and March in Indiana. Was this law sponsored by the deodorant companies? Move to Florida . You can take a shower there. Just don’t get naked!

It is Illegal in Idaho for a man to give his sweetheart a box of candy weighing less than fifty pounds. Must be a lot of fat happy broads there.

Chicago, Illinois forbids fishing while sitting on a giraffe's neck. Wonder if that would apply if you are sitting atop an elephant – or a water buffalo – or a hippopotamus?

One-armed piano players who perform in Iowa must do so for free. Now, that is definitely unfair, biased and prejudiced. Why should they perform for free? One-handed piano players of the world, unite!

In Louisiana, you could go to jail for up to a year for making a false promise. So be sure you mean it when you say your vows at your wedding. “I do, I do, I swear, sweetheart, I do.”

It is illegal to rob a bank and then shoot at the bank teller with a water pistol in Louisiana. So it’s O.K. to use a real gun?

In Massachusetts no gorilla is allowed in the back seat of any car. How about if I put him in the front seat? With a seat belt?

Beavers in Michigan could be fined up to $10,000 per day for building unlicensed dams. The state once sent a letter to a landowner in Grand Rapids ordering him to remove unauthorized wood debris dams. The reply sent by the landowner was widely circulated around the Internet as he pointed out that the "wood debris dams" belonged to beavers and he was not responsible. He could have told them, “I am not my beaver’s keeper.”

You May Not Tie an Alligator to a Fire Hydrant: 101 Real Dumb Laws
Buy Now

Are you laughing at these crazy, funny, dumb, loopy, stupid laws? Here are some more!

No one may cross Minnesota state lines with a duck on top of their head. If you wander around with a duck on the top of your head, you can expect to run afoul – get it, afowl - of the law in any state.

Donut holes may not be sold in Lehigh, Nebraska. So in Lehigh, do as the Lehighans do – be prepared to eat the (w)hole donut and nothing but the donut.

It is illegal to sleep naked in Minnesota. Where do we go to join the “naked police”?

In Reno, Nevada, the sale of sex toys, which includes "any device ... designed or marketed as useful primarily for the stimulation of human genital organs," is forbidden. This law is rather ironic. Brothels are legal in Nevada where you can buy the services of someone to “stimulate” you. But you can't buy a “toy” to “stimulate” yourself.

It is illegal to drive a camel on the highway in Nevada. Better stay on the side streets.

In New Hampshire, you may not tap your feet, nod your head or in any way keep time with the music played in a tavern, restaurant or cafe. The only actions they left out of this law were humming, whistling, singing, dancing and breathing.

New York residents may not greet one another by putting their thumb to their nose and wiggling their fingers. Guns and knives – okay. But thumbs are a no-no.

While riding in an elevator, one must talk to no one, and fold his hands while looking toward the door in New York. Might make more sense to look toward your wallet and your handbag.

Elephants may not be used to plow cotton fields in North Carolina. So keep your elephant at home and use your tractor instead.

A person may be jailed in Fargo, North Dakota for wearing a hat while dancing or wearing a hat to an event where dancing is taking place. I doubt that this law is enforced any more but don’t take any chances. Don’t wear a hat. Just be sure you’re wearing pants.

In Ohio, it is illegal to get a fish drunk. I’m bewildered. How do you get a trout tipsy? a pike pickled? a perch pie-eyed? a bass blotto? a walleye wasted? a salmon smashed? A catfish cockeyed? More significantly, how do you know if you succeeded?

In Oregon, a person may not test their physical endurance while driving a car on a highway. Does that mean racing your car or some other interesting (?) activity?

It is illegal to sleep on top of a refrigerator outdoors in Pennsylvania. I can’t think of a comment that would be funnier than this dumb law.

Horses may not be kept in bathtubs in South Carolina. You can lead a horse to water, but how in the world would you get him into a bathtub?

Skunks may not be carried into the state of Tennessee. Guess it’s okay if the skunks wander across the state line under their own power.

In Tennessee, driving is not to be done while asleep. Wish they would enforce that one during rush hour in all 50 states.

An anti-crime law in Texas requires criminals to give their victims notice, oral or written, 24 hours in advance of the crime they are planning to commit and the nature of that crime. "Dear Mr. Bank President, I'm planning to rob your bank tomorrow. Please leave the vault door open.”

In Texas, It is illegal for one to shoot a buffalo from the second story of a hotel. Shoot all the buffalo you want from the first floor.

In Texas, It is illegal to drive without windshield wipers. You don't need a windshield, but you must have the wipers. And, pray tell, where would you fasten them?

It is illegal to milk another person's cow in Texas. Thou shall not covet thy neighbor’s cow.

Birds have the right of way on all highways in Utah. Is that where we got the expression: “jay walking”?

In Vermont, whistling underwater is illegal. That one I’d like to see for myself.

It is illegal to tickle women in Virginia. I guess it’s OK to tickle men.

In Waynesboro, Virginia, it was once illegal for a woman to drive a car up Main Street unless her husband walked in front of the car waving a red flag. This law may have been enacted by a disgruntled wife looking for a sure-fire way to eliminate her spouse.

It is mandatory for a motorist with criminal intentions driving around the state of Washington to stop at city limits and telephone the local chief of police before entering town. Just like the previously mentioned Texas anti-crime law, the police want criminals to RSVP.

You may not take a picture of a rabbit during the month of June in Wyoming. Unless, of course, you get it to sign a release.

And my all-time favorite: Road kill may be taken home for supper in West Virginia. Whatever you do, do not accept that invitation for a home-cooked dinner.

If you find any dumb, crazy, stupid laws I haven't mentioned, just add a comment and let me know. I'll add them and credit you in a future Hub.

© Copyright BJ Rakow 2011 All rights reserved Author, Much of What You Know about Job Search Just Ain't So