A History Of Life On Earth: The Mesozoic Era

The Mesozoic or ‘middle life’ era is often referred to as the ‘age of reptiles’ because it was during this time that the reptiles, most notably the dinosaurs evolved into the dominant group of animals living on the planet. However, there was so much more to the Mesozoic than its famous reptilian killers. More importantly it was a time of great innovation and diversity among life on Earth.

Earth in the Triassic

At the dawn of the Triassic, the world was still recovering from the cataclysmic geological events that had wiped out virtually all life on Earth at the end of the Permian. On land the climate across much of the globe was hot and dry, but there was enough seasonal rainfall to sustain many species of plant. Especially common were hardy conifers, ferns and ginkgo's, the fossilised remains of which have been found right across the world including the Polar Regions.

During the Early and Middle Triassic (248-227 million years ago), the survivors of the Permian mass extinction found themselves living in a world with few competitors and almost no large predators. Herbivorous animals took advantage of this and quickly proliferated, becoming the most common animals on the planet at the time, among their number was a possible ancestor of all living mammals, including us; a strange pig like reptile called Lystrosaurus. While predators were initially rare, they too soon bounced back and at this time they were mostly represented by a probable ancestor of living crocodilians, Proterosuchus. Most animals at this time underwent an astonishingly rapid phase of evolution, producing new and interesting species, such as Euparkeria, a tiny lizard with a strange ability to rear up onto its hind legs, which offered it much greater agility than its contemporaries. This little insect eating lizard was quite possibly a forerunner of the dinosaurs and their modern descendants the birds. The Early Triassic also saw one group of reptiles become the first vertebrates to re-enter the water permanently since fish had first crawled out in the Devonian Period some 100 million years before.

Certain events in the Late Triassic (227-206 million years ago) were to set the scene for much of the rest of the Mesozoic era. The gigantic supercontinent of Pangaea began to break apart, creating several smaller continents. Up until this point, the land had been dominated by mammal like (therapsids) reptiles such as the aforementioned Lystrosaurus, in addition to several groups of disparate but unusual reptiles such as Proterosuchus, which looked similar to a sprawling dinosaur but was only distantly related. Within a short space of time though, the mammal like reptiles declined in number (apart from cynodonts such as Thrinaxodon which went on to evolve into the first true mammals. In their place came the archosaur reptiles, which consisted of three important groups that would go on to dominate the Earth during the Mesozoic. These were the dinosaurs represented by fast moving bipedal varieties such as Coelophysis and lumbering herbivores such as Plateosaurus. There were also the pterosaurs, flying reptiles that were represented by the small and delicate Peteinosaurus, and the crocodilians represented by the fearsome predator Postosuchus. In the sea meanwhile, the reptiles were also making their mark, producing gigantic ichthyosaurs.

The end of the Triassic is marked by another mass extinction event that affected life both on land and in the oceans, but fortunately was nowhere near the sort of the scale of the Permian. The exact cause is unknown; it was once thought an asteroid might have been the catalyst. But the huge Manicouagan crater in Canada once cited as evidence proved to be too old, thus dispelling that particular theory.

Life in the Triassic

Earth in the Jurassic

Life in the Jurassic

A Time of Giants

The Early Jurassic saw the global climate become warm and humid. In the Polar Regions conifer forests became widespread, while the tropics saw the spread of conifers, ferns and cycads. As Pangaea slowly continued to pull apart, so monsoon conditions occurred across some lowland regions, creating wide river basins that were prone to flash floods. It was during this time that the dinosaurs and pterosaurs established themselves, producing more species, becoming larger and more numerous, and spreading themselves about the globe. The same was also true of the marine reptiles, such as the ichthyosaurs and plesiosaurs, as well as shellfish, which contained most notably among their number the ammonites famous today for their sheer abundance in terms of fossils.

The Middle and Late Jurassic (180-144 million years ago) saw some tropical parts of the world become drier and more arid. Perhaps in response to this dramatic change in climate, many dinosaur species suddenly started to become truly gigantic in size. The herbivorous sauropods produced some of the largest land animals that ever walked the Earth, such as Diplodocus and Brachiosaurus, while the carnivorous theropod dinosaurs produced multi tonne killers, such as Allosaurus. Around these lived other gigantic dinosaurs such as Stegosaurus and Othnielia. The flying pterosaurs produced fish eating species, such as Rhamphorhynchus, and tiny insectivores such as Anurognathus, which probably followed giant dinosaurs around in a parasitic way similar to oxpecker birds, which follow mammalian heavyweights across the African savannah.

The warm Jurassic seas became rich in plankton, which in turn fed large fish, such as Leedsichthys. The predatory plesiosaurs were represented by long necked varieties such as Cryptoclidus, and the largest carnivore of all time, the gigantic Liopleurodon, while the first marine crocodilians such as Metriorhynchus hunted in the shallow seas.

Clash of the Titans

Earth During the Cretaceous

Antarctica During the Cretaceous

The Cretaceous period was characterised by a largely warm and equable climate, with seasonal rainfall that allowed abundant plant life from the Equator right up to the Polar Regions. The flowering plants (angiosperms) with which we are so familiar with today first evolved in the Late Jurassic, but as the Cretaceous progressed, so they became more common and varied. By the end of the Cretaceous the flowering plants had largely replaced the conifers, ferns and cycads in many environments, laying the foundations for their domination in the later Cenozoic world.

The continents also continued to pull away from one another, creating new seas and oceans (most notably the Atlantic), and at times preventing land animals from moving freely across the globe. Gradually the different continents began to evolve their own unique plants and animals.

The Cretaceous was a time of colossal giants. South America was home to the largest land animal ever, a sauropod called Argentinosaurus, and the largest land predator ever, a theropod called Giganotosaurus, while North America was home to sturdy giants, such as Tyrannosaurus and Torosaurus. The dinosaurs also became more specialised, with dinosaur species such as Velociraptor and Protoceratops surviving in the harsh Mongolian desert sand dunes and Leallynasaura, which lived close to the South Pole. In the background of all this reptilian dominance were the mammals which remained small throughout the Mesozoic, but whose numbers began to increase markedly especially towards the end of the Cretaceous.

In the seas there was also a change, as previously dominant predators, such as the ichthyosaurs and pliosaurs, gave way to swift predatory fish such as Xiphactinus, and a new breed of giant reptile, the terrifying mosasaurs, the archetype sea monster, and the top predator of its age.

In the air the pterosaurs grew large with species such as Ornithocheirus and Pteranodon being able to glide across vast distances, possibly even across entire continents. But the age of the pterosaurs dominating the skies was drawing to an end, now they were joined in ever increasing droves by small feathered flying dinosaurs that are known to us as birds. As well as the small flyers, there were also varieties of large, flightless seabirds, such as Hesperornis.

The end of the Cretaceous, 65 million years ago saw a mass extinction event that removed an estimated 40 per cent of the known animal families on Earth. This extinction event is sometimes known as the K/T event, because it marks the boundary between the (K) retaceous period and the Tertiary era. Its most famous victims were virtually all of the dinosaurs; I say virtually all, because as we know the birds did manage to survive. But also many other fossil groups died out including the pterosaurs, ammonites and mosasaurs. Many other animal groups were very badly affected, but managed to survive.

So, what caused the end-Cretaceous extinction? Well, it’s still a matter of debate. But a very strong contender is the impact of a giant asteroid, for which there is much evidence in the Yucatan peninsula in the Gulf of Mexico. However, in recent years studies have revealed that the pattern of extinction is far more complicated than was at first thought, with many animals (including the dinosaurs) beginning to decline between 2-3 million years prior to the asteroid impact. This decline coincides with a marked cooling of the world’s climate. Many scientists now believe that the K/T event might have been caused by a combination of prolonged environmental stress, which weakened many animals, followed by the catastrophic asteroid impact and the several months of global darkness and freezing weather that followed it. Personally I’m not so sure that climate change played a significant role in dinosaur extinction, as they had already proved themselves to be very adaptable to a wide range of environments. Moreover, they were active, fast moving, fast growing and likely warm-blooded. Some dinosaurs it must be noted, had already evolved a layer of thin downy filaments called feathers which helped to both keep them warm and cool when appropriate, which of course survives in modern birds. Whatever the real cause, 65 million years ago saw the sudden termination of the Mesozoic era and the heralding of a new age, the age of mammalian beasts- otherwise known as the Cenozoic era.

The Moment an Era Ended

More on the Mesozoic Era 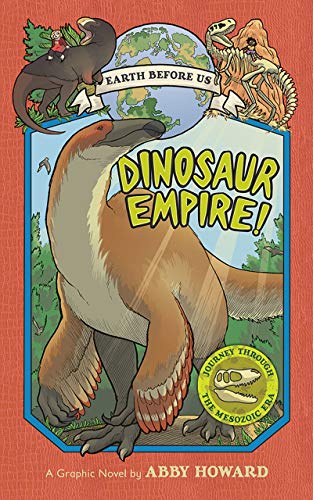 Dinosaur Empire! (Earth Before Us #1): Journey through the Mesozoic Era
Buy Now