A Walk and an Accident at Old Stone Fort State Park

My wife and I are retired and living in Middle Tennessee. We love living in this beautiful state.

Old Stone Fort Park is located in Manchester, Tennessee. The area was used by Native Americans around 1500 to 2000 years ago. After the Native Americans abandoned the area, early settlers thought it looked like an old fort, and it was misnamed as such. It has since been determined that the area was used for ceremonial purposes. Native Americans built the entrance of the “fort” so it aligns with the spot on the horizon where the sun rises during the summer solstice.

The main trail is a 1 1/4 mile loop along the Big Duck River and the Little Duck River. Just off of the parking lot are the park museum and gift shop. There are two miles of other trails around the rivers.

There is a camping area that has 51 campsites with picnic areas, water, and electrical hookups and two restrooms. There are also two trails around the camping area.

My wife, Linda, and I toured the museum and then headed out on the trail that follows the Big Duck River. The weather this New Year’s Day was perfect. Highs in the low 50s, with an occasional gentle breeze, and partly sunny. I was surprised that there were so many people there. The parking lot was full.

As we exited the museum, a park employee was heading out with a group of several dozen visitors for a tour along the trails. Some people brought their dogs along for the trek. The dogs were all on leashes, as park rules dictate, and they appeared to be enjoying their outing.

We were told that the group was heading out for a three-mile hike. We didn't want to go that far, so we decided to just walk along the 1 1/4 mile loop. Shortly after we got on the trail, we came to the first of several waterfalls.

There are several informational signs that detail the history of the Old Stone Fort Park. The trails are for foot traffic only, and there is no swimming allowed. There are a few benches where you can rest and enjoy the beauty of nature.

Much of the trail is fairly level and easy to navigate; however, some areas of the trail are right next to sheer cliffs that drop directly to the river. A fall over one of the cliffs could be deadly.

Even level areas can be dangerous. Recent rains left some muddy areas along the trail. Near the end of our hike, while we were trying to avoid some mud, Linda slipped on some wet leaves and fell. She ended up with a bloody nose. There was a lot of blood, and we couldn't get the bleeding to stop. Several friendly people offered assistance. One lady went to the museum and sent a park ranger to help. The ranger was a very nice young lady. She helped Linda get the bleeding slowed down and helped her to the museum restroom to clean up. We were thankful for the nice people and the wonderful park ranger.

Although the bleeding had slowed, it was several hours after we got home before the bleeding completely stopped. We were fortunate that Linda's injury was not more severe.

A Stroll Along the Boardwalk

Parts of the trail are covered with wooden boardwalks. They make for easy walking.

The trail offers wonderful views of the river and the waterfalls. Some of the views are from clifftops above the river. There are several paths that lead right down to the river.

Old Stone Fort is a great place to visit. There is so much to learn from the museum and from the signage along the trail. The views of the river and waterfalls are amazing. As you can see from some of these photos, the trees have interesting shapes and contortions.

This tree has obviously been through some difficult days. Sometimes the endurance of nature is amazing.

The Tree Below Still Clings to Life

This fallen tree was cut so that it didn't cross over the trail, but some of its twisted roots still appear to cling to the earth.

Linda Grimes - Moments Before Her Fall

The trail passes by the remains of two stone foundations. Before the Civil War, there was a paper mill. Then during the war, a gunpowder mill was built. After the war, the Hickerson and Whitman families purchased the mills and developed the Stone Fort Paper Company.

Old Stone Fort Park is located in Manchester, Tennessee just off of Interstate 24. Manchester is just a little over an hour southeast of Nashville. It is also just over an hour northwest of Chattanooga, Tennessee. 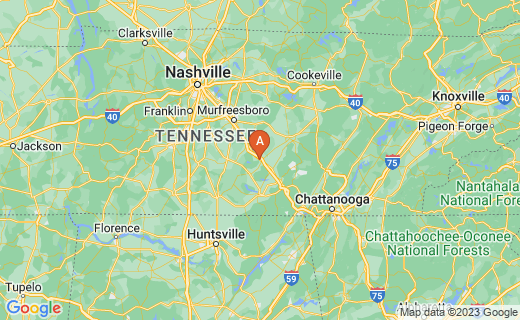