Godwin's Clan - 5: An Earl's Wealth - Harold's Income in Harness, Put to Good Use as 'Sub-Regulus'

Alan has spent much time researching the careers of Earl Godwin and his sons, most famous of which was his son and successor as earl, Harold

Harold was well-known far and wide as a warrior-leader. His enemies knew not to push him too hard, those who did paid dearly

A great part of the wealth arising from Harold's lands...

was put into covering the cost of duties arising from his rank as earl. Administration, taxation and law enforcement took a sizeable share of this wealth. Royal embassies on the king's behalf were covered, as was the defence of the kingdom itself against numerous attacks from the west, less so from the north since the Scots' king Malcolm 'Canmore' was in part beholden to Eadward for help in dealing with his arch-rival Macbeth.

There were some of Harold's huscarls who attended on him who were not yet endowed with lands but most - such as Skalpi, Gauti and Tofig who held land from either their earl or the Church. There were shire reeves who took care of the day-to-day administration, or monks who oversaw his personal affairs, both paid by him for their services. Harold's chaplain Leofgar was later made Bishop of Hereford as a reward for his endeavours on the earl's behalf.

A pilgrimage to Rome and the education of his daughter Gunnhild at Wilton, buying relics for his church at Waltham, hunting and hawking were also met by incomes from his lands and holdings. Harold would also be expected to show his wealth and might in the form of fine clothing and the giving of gifts or alms. His banner, the 'Fighting Man', was one such display of his wealth, worked in pure gold and bejewelled. After his defeat and death William saw fit to present it to the Pontiff Alexander II in Rome. The gifts Harold gave to his church of Holy Cross at Waltham reflected his generosity to a favoured religious house. If he could give such rich vestments of cloth of gold, adorned with gold and jewels as well as furnishings of gold and silver, think what his own household must have been like!

In scenes depicted on the Bayeux Tapestry we see Harold gracing lavish banquets, the grandeur of the palaces he visited and the fine horses and ships he had for travelling on. He is shown as being well-dressed, and those of his favoured underlings and huscarls who rode or sailed with him also benefited in their attire.

Many of the spoils taken from the estate of the defeated Gruffyth ap Llewellyn were given as gifts to King Eadward, such as the carved, gilded ship figure-head and other fine treasures in AD1063. His hunting lodge at Portskewet in Monmouthshire (which featured on a Time Team programme on Channel 4 here in the UK) was furnished with some of Gruffyth's treasures to mark his victory and to show his generosity as the king was also expected to visit. His followers would have gained to a lesser extent, but they would not have lost out.

Beyond fostering support among the laity by gifts of land or silver, Harold needed to gain the backing of the Church. as with the great laymen, the Church could muster support in many secular areas and he would gain in this direction more than a few times. As Harold was in any case deeply pious they could give him absolution for any sins he committed. Giving gifts of silver or land played a central role in mediaeval affairs and Harold had a number of well-placed enemies within the Church, notably those who were brought from outside the kingdom by Eadward. The Earl of Wessex had given to certain establishments just as had the king who favoured his own West Minster, or as Earl Leofric gave to Coventry and Earl Odda to Deerhurst. Harold is on record as having donated to Malmesbury Abbey, Durham Cathedral, Peterborough Abbey, Abingdon Abbey and Waltham's Holy Cross church with its secular college.

Harold and his father had come to an agreement with Eadward not to allow Bishop Hereman's takeover of Malmesbury Abbey as the new seat of his diocese. The clerks of Durham recorded the obit of Harold Godwinson in their Liber Vitae. Peterborough's monks also acknowledged him as a benefactor despite their abbot Leofric being a member of the Mercian earl's clan. Harold had also helped Abbot Orderic of Abingdon in the enforcement of the abbey's rights to land at Leckhampstead and at Kingston Bagpuize. As well as her husband's patronage Eadgytha 'Swan-neck' was a benefactor of St. Benet-at-Holme, giving it an estate at Thurgarton in Norfolk. Nevertheless, much of Harold's time and energy was devoted to his foundation at Waltham.

When he first came into the lands of Waltham after Aethelstan - son of Tofig 'the Proud' - forfeited it in the late 1040's, Tofig's church had a 'Holy Cross' in the shape of the crucifixion that was associated with miracles. Tofig and his wife had endowed the church with gifts of land and wealth according to their standing and when Harold took control of the church he also adopred it as his own. He was motivated by real religious rather than 'just going through the motions' as many nobles did to 'keep face'. THe Vitae Haroldi put this singular devotion down to a miraculous cure from paralysis contracted after his Welsh campaign of AD1063. The tale, or teller is confused as Harold had the church rebuilt in AD1060. The later Waltham Chronicle goes into detail:

'There was the story of his going there to pray before his last battle in early October, AD1066. He had undertaken to build and decorate a new, elaborate stone church in the style of the king's new West Minster abbey church. Little remains of the fabric of his church, much being rebuilt later. Harold's church was built in an Anglo-Frankish, pre-Norman style, reflecting influences from his travels across the Continent. Dedicated to Christ and the Holy Cross, the church was opened with ceremony on May 3rd, AD 1060, the Feast of the Finding of rhe True Cross and attended by Eadward and his queen, Eadgytha - Harold's older sister - amongst many others.

The new foundation was staffed as a college of canons with a dean, Wulfwin who had twelve canons, each paid 40 shillings a year - with a Lotharingian school-master Adelard. The twelve canons were each endowed with an estate in totl over 70 hides in the shires around the northern boundaries of London, with a taxable value of £43 altogether. The church was lavishly decorated within with gold and silver plate, church vestments of gold cloth and bedecked with jewels. A handsome altar of gold and marble was supported by golden lions and adorned with paintings of the apostles. An inventory made at the time of the Dissolution in AD1540 includes two Saxon gospel books with decorated silver gilt covers that had featured once among Harold's gifts.

His generosity toward Waltham was such that the canons of Waltham saw to his last rites before burying him and kept his memory alive even under Norman attempts to besmirch his name or eradicate it. Waltham's canons remembered Harold as their second founder and greatest benefactor in a later 12th Century account of their establishment's history - later compiling a life of Harold, although his importance in this was piously exaggerated.

Regionally, Harold's name is celebrated through Waltham's erstwhile possessions at Harold's Park at Nazeing, Harold Hill and Harold Wood near Romford. Despite sources being hard to locate, an outline of the way Harold put together his possessions around the southern and western shires has been possible. The uses to which his wealth were put have also been outlined. These ranged from building a power-base for his political support and climb to the kingship by gifts to both laymen and the Church.

The House of Godwine 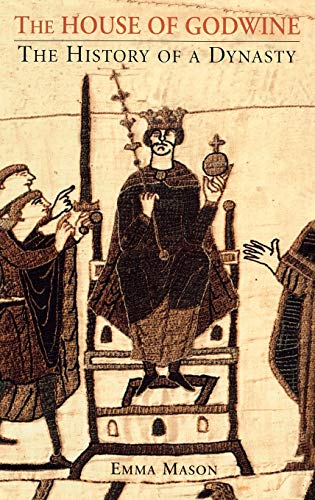 The House of Godwine: The History of a Dynasty
Buy Now

From his beginnings as the son of South Saxon thegn Wulfnoth, Godwin would achieve the premier earldom of Wessex under Knut and Eadward. His sons enjoyed varying success to begin with, their fates changing under different circumstances. Eldest son Svein, named after Knut's father Svein 'Forkbeard', began his promising career as earl of Hereford. Things began to unravel for him after he abducted the abbess of Leominster. Harold's promise continued from the earldom of East Anglia to Wessex and the kingship, to fail through tiredness at the end, costing the lives of younger brothers Gyrth and Leofwin with his own. Tostig had been recommended by Harold and sister Queen Eadgytha for the earldom of Northumbria after the death of elderly earl Siward. His future was assured until he took sides in a family feud...

History is written by the victors...

Like Knut before him writers have belittled Harold's achievements. He was not heavy-handed like his successor William. He is said to have been fair, and before a battle would give his enemy the opportunity to cut his losses and withdraw without a stain on his character. He had already issued coinage in the early months of his reign and was an able administrator and judge. There is literature enough to attest to sound mind and good character - much of which was destroyed in the aftermath of his defeat on Caldbec Hill above Hastings.

He was an able leader of men, respected not feared - as William was - by friend and foe alike, his earldom of Wessex prospering under his stewardship over the twelve years since following in the footsteps of his father in 1053. His succession as Earl of Wessex was not automatic, but Eadward favourably viewed his abilities as earl of East Anglia.

Next - 6: Wealth and Standing in the Kingdom