Weighing over 100 kg, giant pandas are big, chubby, and as tall as a man (4 to 6 feet height) when they stand on their hind legs. When they are not sitting on the ground eating, they are agile tree climbers. Panda was the most treasured animal in ancient China emperor’s garden of exotic animal. The panda bear in London Zoo, Chi Chi, is so popular that the World Wildlife Fund decided to use panda as their logo.

How Many Giant Pandas Are There in the World?

An endangered species, giant pandas are among the rarest species in the world. Their numbers in the wild is probably fewer than 1000, due to panda’s habitat cut back by the loss of forests for development, wood and farmland. Their low birth rate is another cause of their near extinction. Giant pandas are also having problem finding food to eat as they feed almost exclusively on shoots of bamboos. Some bamboos flower once every century and then die, and many years are needed before the seeds can grow new plants.

Where Can We find Giant Panda ?

Since giant panda is among the world most adored and protected rare animals, its natural inhabitant was given the UNESCO World Heritage site designation, such as the Sichuan Giant Panda Sanctuaries in the southwest of Sichuan province, covering seven natural reserves.

How Often Does Giant Panda Eat?

Giant pandas spend most of their time sitting around on the ground eating. Due to their huge bodies, and inefficient digestive system, they have to eat continuously, more often than other animals. They spend 12 hours a day feeding on more than 40kg of bamboo shoots. Given this huge diet, the giant panda can defecate up to 40 times a day.

Primarily herbivorous, giant Panda's diet is 99% bamboo. However, since they possess ursine teeth, they will also eat meat, fish and egg when available. In the zoos, under captivity, the giant pandas are fed bamboo diet, though some will be fed formulated biscuits and other dietary supplements.

Giant pandas’ paw has an extra ‘thumb’ apart from five fingers. The extra thumb is actually a modified sesamoid bone on the wrist which is covered by a fleshy pad. Its function is to help the panda to hold the bamboo while they are eating.

In the wild, giant pandas give birth to one or two cubs annually. The baby cubs are very tiny, pink in colour, blind, and toothless, weighing only 90 to 130 grams. The mothers give up eating to look after the cubs for the first 10 days or so. One to two weeks after birth, the cub's skin becomes grey; its hair will eventually turn black. The cubs usually stay with their mothers for nearly a year, feeding primarily on their mother's milk, though the cubs are able to eat small quantities of bamboo after six months.

Breeding pandas in zoo initially have mostly led to failure. The pandas lose their interest in mating once they are in captivation. In desperation, scientists have tried extreme methods, such as showing the giant pandas videos of pandas mating, and giving the male pandas Viagra.

In Washington zoo, a giant Panda called Ling Ling have given birth to a few cubs in 1970s and 1980s, but the cubs died very soon after birth.

Only recently, researchers started having success with captive giant panda breeding programs, after discovering that giant pandas have quite similar breeding to the American black bear. The current reproductive rate is about one baby every two years. 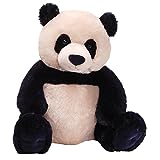