One of the entertaining things about having lived in various counties around England has been coming across words or usages of words which are new to me, because they are specific to that region or sometimes even one small village or town.

Occasionally dialect usage has left me confused or with something I didn't quite expect, but that is all part of the adventure!

Burnley in East Lancashire is where I live now. Lancashire is in the North West of England with a coastline on the Irish Sea and a particularly notable border with Yorkshire as these counties were pitted against each other in the Wars of the Roses between 1455 and 1487. The counties maintain a friendly rivalry to this day. Burnley and many other Lancashire towns were once renowned for their cotton mills - I understand that cotton is easier to weave and work with in a damp climate. A lot of dialect which was very specific to that trade is no longer used, but has been recorded in ‘Sounds Gradely’ by the Northwest Sounds Archive and in a handwritten notebook by KG Spencer available for reference use from Burnley library. I used these and my own experience of six years living in Burnley, hearing the Burnley dialect and dialect heard when visiting other parts of Lancashire, to bring you the following:

These are the most helpful words for you to know if you do visit Burnley. These are all words which I’ve heard pretty much every day.

Alreet - meaning hello. Alreet is a very common greeting amongst Lancashire folk. However often I hear it I want to answer as though it was the question "Are you alright?" My brain can't quite get to grips with replying with "alreet."

Pants – meaning trousers. This won’t come as a surprise to American readers because I believe pants is commonly used as a noun meaning trousers in America. But for those of us who come from other areas in England, it is rather startling to hear people discussing with each other what pants they are going to wear the next day. This is because for most English people outside of Lancashire, pants mean underpants or knickers.

Teacake – meaning plain bread roll. In most of England asking for a teacake will get you a delicious slightly sweet roll with raisins in, much favoured when toasted, hot and buttered. I love teacakes. I was therefore sorely disappointed during my first week in Burnley when I treated myself to two teacakes, opened the paper bag and found I had two plain bread rolls. If you want a ‘proper’ teacake in Lancashire you must ask for a currant teacake. It is very disconcerting to hear requests for ‘bacon teacakes, which out of Lancashire would get you a strange look (Bacon in a sweet roll anyone?). In Lancashire it gets you bacon in a plain roll. I would call that a bacon butty or a bacon cob.

Oin – meaning annoy; as in “stop oining me, John.” It is pronounced like coin without the C. This word doesn’t crop up in either of the books I used as reference, but is in frequent use and I haven’t heard it outside of Burnley. It’s a word I’ve adopted because it’s quite useful!

Ginnel or Gynnel – meaning outside passageway, usually between two houses in which case it’s a shared ginnal if both households can use it. It is pronounced with a hard G. This is one of the first Lancashire words I learnt, because I was told that my house had a shared ginnel.

Ult – meaning anything; as in “Do you want ult else?”

Clough – meaning stream, pronounced to rhyme with fluff. Again not mentioned in the books I read but in daily usage on maps and signs. It is one of my favourite Lancashire words.

Sough – meaning drains, culvert or a hole, pronounced to rhyme with fluff. Like clough it is in use through place names. East of Burnley is a village called Sough – sounds pretty to the outsider, but not really a flattering name for a village in Lancashire!

Agate – this is a complicated word. In most of Lancashire it means making a start on something; as in “he’s agate painting the house”. In Burnley it often means said. So you might hear a conversation reported to you thus; “he’s agate ‘what are you doing?’ and I’m agate ‘mind your own business!” However agate can also be used to replace other verbs such as to go e.g. “I’m agate home.”

These are all words I’ve heard once or more, but not on a regular basis.

Clatter – meaning hit as in “I’ll clatter him if he comes near me.”

Back-end - the period which is the end of summer beginning of autumn. Quite useful really since it is much shorter then that phrase!

Mary-Ann – behaving like an old woman. I overheard two women conversing and one said to the other “stop being a Mary-Ann”. I had no idea what she meant at that point, but ‘Sounds Gradley’ enlightened me.

Boggart – a mischievous figure, imp or spirit. These have been made slightly famous by an childrens’ animation series based around the legend of the treacle mines in Sabden – a village near Pendle hill, North of Burnley.

A Few Lancashire words I’d Like to hear, but haven’t

These are words recorded in ‘Sounds Gradely’, but I haven't heard them used.

Pobs – a meal of bread and milk. This really harks back to harsher times when families were large and cotton workers wages didn't stretch far enough.

Sken – a quick look at something.

Lancashire dialect is complimented by the Lancashire accent. In the clip members of Pendle Borderline Theatre Company, who are Lancashire natives, rehearse a scene from Devilish Practices by Richard MacSween. 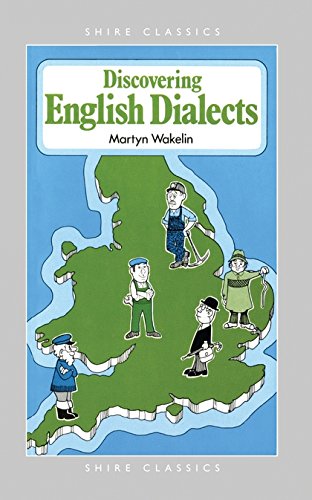