Yet another young life was wasted when a shark attacked 22 year old Alexandre Rassica as he was surfing off Reunion Island in the Indian Ocean.

He was about 100m (330ft) from shore at Trois-Bassins, on the west side of the island, when a shark attacked him and bit off his right leg.

Fellow surfers went to his aid and dragged him to the shore, where paramedics were quickly on the scene.

It was too late. Mr Rassica had suffered a cardiac arrest through shock and blood loss, and despite working on him for more than an hour, they were unable to save his life.

This brings the total number of deaths by shark attack on Reunion Island to nine, since 1972.

Worrying, this is the third fatality in just over a year.

In 2011, on the 19th of September, Mathieu Schiller, aged 38, was fatally injured while bodyboarding at St Giles, Reunion.

These three deaths appear to herald a big increase in shark fatalities considering there has only been 6 in the previous 38 years.

Also in 2011, 32 year Eric Dargent lost his lower leg to a shark in the February, and was lucky to escape with his life.

Where is Reunion Island? 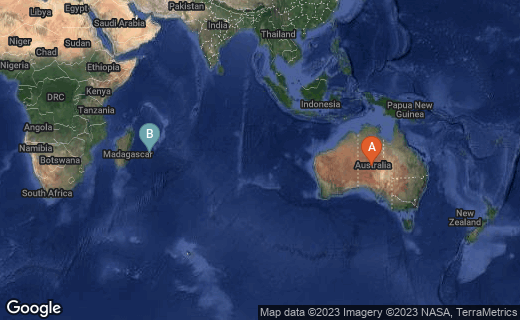 Reunion Island is just a dot on the map, 500 miles east of Madagascar in the Indian Ocean. Nearby Mauritius is better known as a tourist destination, but Reunion would love to welcome visitors.

Home to up to 800,000 people, this tropical island is only 38 miles long and 28 miles wide. Situated right on top of one of planet Earth's hotspots, it is volcanic with both extinct and active volcanoes.

With heavy forestation on the mountains, it is amazing that there is room for all these people too.

To the west of the island are 17 miles of idyllic sandy beaches, with crystal clear azure waters to bathe in, and wonderful coral reefs just perfect for diving or snorkeling.

These warm coastal waters are also home to some of the most dangerous sharks on the planet.

Just a week before the death of Alexandre Rassica, we saw Ben Linden bitten in half by a great white shark off the coast of Western Australia.

The premature and awful death of Alexandre Rassica has left another family shattered, and all here at sharkfacts send his friends and family our deepest condolences.