The name Algonquin is used to denote a Native American Indian tribe and it is different from the term Algonquian, which is the name of the language family that this tribe, the Alginquin Indians, belongs to.

Algonquin, pronounced al-GON-kin, means "at the place of spearing ﬁsh".

In the early 17th century, Algonquin Indians lived in the Ottawa Valley of Quebec and Ontario, along the northern tributary rivers. Today they live on reserves in Ontario and Quebec as well as in regional cities and towns.

Historically, the tribe has played an important role as early allies and trading partners of the French.

It was Samuel de Champlain, a French fur trader, who first made contact with the Algonquin Indians.

He came to North America in 1603 and participated in the founding of New France in the eastern part of Canada.

Champlain was the ﬁrst European to explore the territory along the Ottawa River, now part of the border between Quebec and Ontario. The Ottawa River got its name after the Ottawa Indians. In the 17th century, the river and several of its tributaries ﬂowed through the land of the Algonquin Indians.

Trouble with the Mohawk

Trade frictions resulted in a war with the Mohawk Indians. The Algonquin won that skirmish with assistance from the French in hopes of maintaining an important trade partner.

However, the French had made a powerful enemy in the Mohawk, and within a few decades the local military situation had been reversed, with the Iroquois now in control.

In the meanwhile, the Huron became a major trade partner of the French forcing the Algonquins in the background. The Mohawk, in need of more trapping space, soon attacked again. The Algonquin Indians were driven out of the upper St. Lawrence area and the Ottawa Valley.

They returned when peace was reestablished in the 1660s, but an epidemic in the 1670s left them further weakened.

Trouble with the Iroquois

The French alienated the powerful Iroquois tribes to the south by insulting some of their people, so the Iroquois Indians allied themselves with the Dutch, and then the English.

They raided the north in several attempts to drive out the French and their Indian supporters. They managed to drive the Algonquin Indians along with other tribes from their homelands.

Some of the surviving Algonquin joined other Algonquian tribes, such as the Ottawa, while others found a way to return to their homelands, where their descendants live in various Indian groups to this day.

After the French were defeated once and for all in 1763, the Algonquin Indians became staunch British allies. Reserves for the group were established in the 19th century, with their lands taken over by British settlers.

The decline of the fur trade and of their hunting grounds, owing to local logging operations as well as a growing dependence on non-natives, led many Algonquin Indians to begin a sedentary lifestyle.

Life of the Algonquin Indians

The Algonquin Indians lived their everyday lives just like other northern Algonquians, doing little farming and much more gathering, fishing, and hunting.

Men ﬁshed in both summer and winter. They hunted game such as moose, deer, caribou, and beaver. Agricultural crops played a minor role in their diet. Some bands made maple sugar. Dog was eaten on occasion.

Algonquin Indians imported ﬁsh nets and cornmeal from Hurons and also traded a lot with Iroquoian tribes. They traded animal pelts and porcupine quills to nearby groups in return for corn, tobacco, ﬁshing gear, and wampum.

The houses of the Algonquin Indians were cone-shaped tipis as opposed to the dome-shaped wigwams found in New England. But they also erected rectangular houses.

In the summer, they used birch-bark canoes to travel across the country; in the winter, they used snowshoes and toboggans in the snow.

Algonquin Indian dress varied according to location. Most clothing was made of buckskin or moose skin. Clothing included breechclouts, skirts, ponchos, leggings, robes, and moccasins; moccasins were dyed black. Fur garments were worn in cold weather. Both men and women wore their hair long and braided.

Algonquin Indians fought with bows and arrows, spears, and blades; they were early allies with the Huron. They ruled over the Iroquois before the latter banded together in their great confederacy.

Beliefs of the Algonquin Indians

In the manner of other Algonquian tribes of the northern forest, the Algonquin Indians believed in Manitou, the Great Spirit, as the primary force of nature, and the source of life.

Manitou, much like the tao of Daoism, was a supernatural force, present in all living things and all lifeless things. The Great Spirit took various forms.

In written accounts, an Algonquin man, for instance, stated that his most important religious totem was a hair pulled from the mustache of Manitou. It was wrapped in duck down and hidden in a leather pouch beautified by porcupine quills. The pouch was contained in a 2nd and 3rd purse. According to the man, Manitou’s mustache hair had been responsible for saving him from sickness and leading him to moose when hunting.

The people also believed in the existence of lesser spirits, both good and evil. Both shamans and hunters sought guardian spirits to assist them with their work, which included interpreting dreams and healing the sick. After death, the spirits of hunters were believed to chase the spirits of animals. 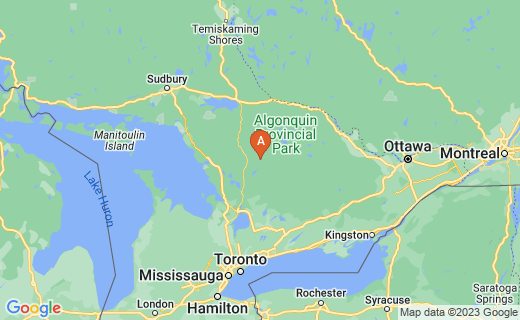 The Algonquin danced ceremonially dances depicting warfare to entertain visiting Indian tribes in their Feast of the Dead.

In one of the dance, a warrior would pursue another with a cudgel, but would fail to defeat him and almost be killed himself. By weaving and bobbing to drum-beat, the warrior would in the end successfully outmaneuver his enemy and gain the upper hand.

When entertaining guests, the tribe did not eat. Clan descent as well as the inheritance of hunting grounds may have been patrilineal. Bands tended to come together in summer and disperse in winter. People pup wooden roof-like structures with painted images of themselves at one end over the graves of people with high status. People were reluctant to mention their real names for fear of misuse by witches.

Today, there are nine Algonquin Indian groups with reserve lands in Quebec, and one in Ontario. The Abitibi Indians, with one group in Ontario and one band in Quebec, are held to be a sub-tribe of the Algonquin.

Some Indians tend gardens, and some work as guides to visiting sportsmen. Others stick to a traditional hunting and trapping lifestyle. Important local industries are construction, forestry, and transportation. The Algonquin Development Association supports the initiation of new economic projects.

The Canadian communities listed under Government / Reservations are legally
recognized tribal entities. A framework for negotiations has been reached between the people of Golden Lake and provincial officials regarding a land claim for 3,400 square kilometers of land in Ontario.

Many Algonquins have married non-natives and became a part of with non-native society. Still, at least 60 percent of Quebec Algonquin Indians speak their ancestral language. The community of Kitigan Zibi Anishinabeg has a primary and secondary school, a women’s shelter, a youth center, and other resources. The Matciteeia Society is an Algonquin cultural organization.