A revised version of this essay is included in the recently published, second edition of my (Freeway Flyer/Paul Swendson) American history book.

Why do Americans Stink at Geography?

For years, I have heard (and seen at times for myself) that Americans are terrible in geography. I decided to do a little quick research, and sure enough, when I googled “Americans Geography Knowledge,” several links came up confirming how dismally Americans perform on geography tests. (See link at the end.) Some might see this as one of many symptoms of a generally lousy American educational system. Knowledge of global geography in the United States, however, seems to be uniquely bad. In one study, the United States scored 117th out of 193 countries on a test of global geographic knowledge. (See link at the end.) For the wealthiest nation on earth, a country that intervenes in the affairs of countries all over the planet, this is both disturbing and embarrassing.

It is easy to blame either the educational system for failing or the American people for choosing to be dumb. These, however, are simplistic explanations. Americans often display an amazing capacity to memorize information. The problem, many would say, is the information that they choose to memorize: sports stats, details about the lives of celebrities, movie/TV trivia, the intricacies of computer games, etc. So if the memory function of the American brain is clearly still intact, then why can’t we find anything on a map? It’s pretty simple. People memorize information that they care about. Clearly, Americans often don’t care enough to bother learning very much about the outside world. So how can you explain this lack of interest? As a history teacher who took a lot of geography in college, I believe the answer can be found by looking at both our nation’s geography and history.

For roughly our first one hundred years, both the American government and people did not pay much attention to the outside world. The global center of power, Europe, was across the Atlantic Ocean, a major barrier at this point in history. To the south and west were Spanish colonies that, in most cases, turned into new, relatively weak nations by the early 1800’s. (When we eventually expanded to the west coast, the Pacific Ocean served as a massive barrier.) To the north Canada, which was controlled by Britain throughout the 19th century, posed a threat in our early days. We fought a war with the British from 1812-1815, which would be the last time that a foreign army invaded the continental United States. Within a relatively short time after this war, however, relations with the British improved, and the prospects of Canadians invading us (wielding hockey sticks) subsided. We did not, therefore, face any serious threat from a foreign nation during this century. The only war we fought against a foreign nation on the continent of North America was the Mexican War, a war that the United States country provoked in order to gain control of Mexican territory.

As the Mexican War demonstrates, when Americans looked outward, the tendency was to look west. In addition to being blessed by geographic isolation, we were also blessed with seemingly unlimited, empty space (once Native Americans and Mexicans were knocked out of the way, of course). The United States from its inception was always in expansion mode. We just had plenty here in North America to keep us busy for a while. Of course, the frontier would eventually be tamed and somewhat settled. In addition, our economy by the late 19th century was becoming industrialized, creating the need to seek out new sources of raw materials and new markets where we could sell all of these mass produced goods. So once the frontier was settled, and the need to expand seemed stronger than ever, Americans gradually started looking beyond their borders. Latin America was the most natural place to turn first, but there were also efforts to acquire islands in the Pacific – sometimes violently, as in the Philippines - to gain access to the Asian market. Still, most American trade and manufacturing took place at home, so most Americans focused on events here. Europe was by far our biggest trading partner, but Americans, as always, took little interest in getting involved in European politics.

So what does this little history lesson have to do with bad geography tests? During our nation’s formative years, Americans had little reason to care about the outside world. We had plenty here in the western hemisphere to keep us busy, and there was little reason to worry about external threats (except for those “pesky” Native Americans). Now I don’t know if studies were done in the 19th century to measure American geographic literacy, but it would not surprise me if their knowledge of world geography and global events was pretty slim. Our country’s geographic isolation and its enormous amount of physical space for expansion may have left a cultural imprint on us that has cursed our people to forever suck on geography tests.

You should see a problem with my argument, however. If you have some knowledge of the past one hundred years of American history, then you know that the United States became much more involved in the outside world over this past century. The United States, in World War I, was eventually dragged into its first European war. After it was over, disillusioned Americans decided to go back to the isolationist policy we had always tried to follow. It would therefore take an attack on Pearl Harbor to officially drag us into the Second World War. When that war ended, the United States asserted itself as a global superpower, a position that it is yet to relinquish. We then spent forty-five years on a global crusade against communism, and today we are engaged in a “war on terror.” And throughout the last century, our global trade interests have consistently grown in scale. Some would argue, in fact, that our struggles against the evils of communism and terrorism have often been a cover for promoting economic interests. Where businesses go, the military must follow.

It seems logical, then, that as our country became more involved in the outside world, the American people would also show more interest in international affairs. Clearly, however, this has not happened. Why? While I cannot answer this question with certainty, I think that our continuing geographic ignorance is the result of another trend that corresponds with our emergence as a global superpower. After World War II, the United States quickly emerged as the most wealthy, technologically advanced nation in history. And as Americans became enraptured and distracted by new gadgets like televisions and their beautiful suburban “clone homes,” it was easy to put out of their mind events around the world that were a bit scary and depressing anyway. After the Great Depression and World War II, Americans wanted escape to a place, both mentally and physically, where they could feel safe. And as scary as the Russians might be, they still seemed far away from suburban Orange County (and Disneyland).  Our geographic location used to be the main factor in making America feel safe. To some degree, it still does. Today, however, and for the last sixty-five years, a massive military and, maybe more importantly, unprecedented material prosperity are the main factors in creating our little bubble of security out here in North America.

There have been times since World War II that global events captured our attention: Korea, the Cuban Missile Crisis, Vietnam, the Iranian Hostage Crisis, the fall of the Soviet Union, the first Gulf War. Still, it took a catastrophe on American soil on September 11, 2001, to truly burst our bubble of security. For the first time in 60 years, large numbers of Americans were killed by foreigners on American soil. Suddenly, international news really seemed to matter. And yet here we are, nine years into the war on terror, and most Americans cannot find Iraq on a map. I bet a lot of them, however, can tell you the name of last year’s NBA Most Valuable Player (Lebron James), some of the winners of the “American Idol” competition, or what the hottest computer or video game might currently be. Once again, material prosperity and entertainment can suck us in every time. The outside world, after all, seems so damn scary, depressing, and far away. 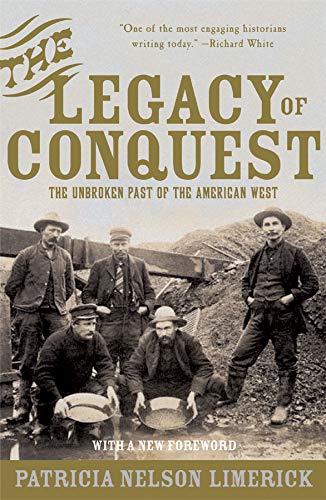 The Legacy of Conquest: The Unbroken Past of the American West
Buy Now