This is the first lesson in a series of 27 lessons covering American History through 1865. This week covers Geography, Native Americans, and Columbus. I used these lessons while teaching a 45 minute history class for children in Kindergarten, 1st, & 2nd grades. Each lesson includes a biography report, history notebook page, history song, our favorite children's books, YouTube video, a history joke, & a variety of hands-on activities to make each lesson engaging & memorable. Use these fun lessons with your classroom, homeschool, after-school program, or co-op!

For the class each child will need to bring each week a 3-ring binder, glue stick, scissors, and crayons.

1. Welcome to the fun class, Hands-on Adventures Through American History!

2. Introductions: Everyone shares their names and what they’d like to get for their birthday (or more simply, something they like). Today we’re going to talk about the birthday of our country, or rather, how our country started. First let’s try to find our country on a map.

4. We live in a country called the United States of America, but before our country existed, there were already lots of people living in North America: Native Americans also called Americans Indians. Read North American Indians by Marie and Douglas Gorsline. 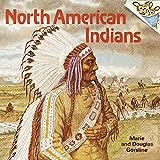 North American Indians (Pictureback(R))
Of the many books we read about Native Americans, this was the best one I found that covers the various main tribes, highlighting the main aspects of the various regions. The illustrations are realistic and beautiful and keep the attention of young children. The amount of text is perfect for younger elementary aged children.
Buy Now

6. Eventually in 1492, Columbus sailed the ocean blue searching for 3 S’s: spices, sparkly things, & opportunities to spread God’s word. He was trying to reach China so he could get the spices and sparkly things and spread God's word. Around 1270 an Italian man named Marco Polo went to China. [Point out China on a globe.] He brought back wonderful spices [let the children smell some nutmeg and cinnamon] and sparkly things like the jewels [show the necklace]. Most importantly, he was a Christian, and he wanted the people of China to hear about Jesus and the Bible [show a Bible]. It was a long journey, mainly walking across the land, to get to China, and it was really dangerous because there were lots of thieves along the way. 150 years later people like Christopher Columbus thought that maybe you could get to China by a boat by sailing the other way around the world to get to China. [Point on the globe.] What’s in the way, though? Yes, North and South America are right here! Well, Columbus didn’t know that. He thought he’d made it to the same place Marco Polo had visited...but he wasn't in China. Do you know where he was? America!

7. Each week a different child will do a 2-3 minute presentation on someone we’re learning about that week. This week we will be hearing about Christopher Columbus. (Because it was the first day of class, I had one of my children do the class presentation.)

8. Allow children to each have a Marco Polo Spice Cookie to remind them about the spices that Columbus was searching for. Aren’t they tasty? Would you try to travel around the world to get the spices needed for these cookies?

10. Take a photo of each student in the glass holding the globe (showing North America). Then take a class photo of everyone together. We love the Charlotte Mason approach of reading living books and also appreciate Sarah Mackenzie's Read Aloud Revival, so we spend a good portion of each day reading quality picture books related to our history subject of the week. We read through huge stacks of books and these were our favorite:

Nest Entertainment: Our Favorite Video on Columbus for Younger Children