This is the 11th lesson in a series of 28 hands-on lessons covering American History through 1865. This lesson focuses on reviewing the Colonial Period & the American War for Independence. I used this plan while teaching a 45 minute history class for children in Kindergarten, 1st, & 2nd grades. Each lesson includes a biography report, history notebook page, history song, our favorite children's books, YouTube video, a joke, & a variety of hands-on activities (cooking, painting, dramatizations, etc.) to make each lesson engaging & memorable. Use these fun lessons with your classroom, homeschool, after-school program, or co-op!

What do you love learning about the most in history?

2. Review: Who was in American before Europeans came? (American Indians) Who landed in America in 1492 & is considered by some to be the first European to "discover" America? (Christopher Columbus) What is the name of the first successful English colony? (Jamestown) When you think of Jamestown, you should think of which 2 people? (John Smith & Pocahontas) In Plymouth, Massachusetts which group of people arrived in the Mayflower? (Pilgrims) Who helped them? (Squanto) Eventually how many colonies were there? (13) A war broke out between the French & British. What was it called? (French & Indian War) Because of that War, King George III allowed the British parliament to collect taxes in America. What was one event that was a response to that? (Boston Tea Party or other event) Some American colonists decided they needed to break away from England & form their own country. What letter did Thomas Jefferson write staying this? (Declaration of Independence). Then they had to fight for 8 years to win their independence. Who lead the American Continental Army? (George Washington) Tell me something about when General Washington & his men had to spend the winter in Valley Forge (no boots, firecakes, Baron von Stuben drilled them, etc.) What was the last major battle of the American War for Independence? (Battle of Yorktown) Who had to surrender to General George Washington? (Cornwallis)

4. Just like [student's name] shared with us during his/her presentation, Washington Irving was a well-loved American author during this time period. 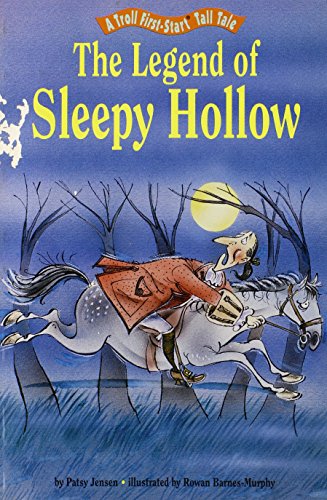 The Legend of Sleepy Hollow (First-Start Tall Tales)
This is a short version of the story with illustrations that are silly looking enough that they are not overly scary, which is ideal for the younger children. "The Headless Horseman" (Step-Into-Reading, Step 3) by Natalie Standiford is another good option, though the illustrations are just a tiny bit scarier.
Buy Now

5. Now that we finished studying the American War for Independence, we're going to create a miniature book so you can take it home & share it with your family. Allow children to cut out & then the pages of the book. Walk around and hole punch & staple together the pages as children color. The booklet can be added to their 3 ring history binder.

6. Review game: Print out some or all the questions from the end of each of the past 10 lessons. Cut the questions onto individual pieces of paper. Divide the class into 2 teams. (I did boys vs. girls.) Have each child take a turn, draw a piece of paper, & try to answer the question. If they can't answer it, the other team gets to guess to steal the point. Record the points on the board. The winning team gets their first pick in a treat at that time: fruit leather. The losing team gets to pick second.

7. Since we'll be having a class party next week, there will not be an assigned biography report. Even though we didn't introduce new information (beyond the Washington Irving & American Literature information, there are a few other great children's books on the American War for Independence that can be included. These were some of our favorites:

Liberty's Kids The Man Who Wouldn't Be King

Joke: What do you call an American revolutionary who draws cartoons?