An Alaskan Mystery: The Missing 24 of Nome

It was October 2004. A 21-year-old man from a tribal village on St. Lawrence Island was on his anticipated trip to nearby Nome, Alaska. Eric Apatiki wanted to see his pregnant girlfriend and cash in his Permanent Dividend Fund check for goods in the small, historic town.

While consisting of a population of a little more than 3500, the town was the commercial hub in northwest Alaska’s nearly isolated Seward Peninsula. It was the closest thing to a “big city” for miles around. It was also a town many native Inupiat village elders in Alaska and Siberia had warned others to be wary of.

“People disappear over there…” Tribal leader, Delbert Pungowiyi of Savoonga, told two reporters for the Anchorage Daily News in 2005.

It was unclear if Apatiki ever heard the warnings. The young man was undeterred. He left for Nome, and was never seen or heard from again.

Apatiki wasn’t the first person to go missing in Nome. Between 1960 and 2004, twenty-four people – mostly men from neighboring native villages –vanished without any traces of their whereabouts.

Several speculations have been made about what happened to them; some suspected a serial killer was on the loose while others theorized that the region’s harsh environment was to blame. There are even those that thought the missing 24 were victims of UFO alien abductions.

Whatever the reason, the missing 24 had garnered the attention of the Federal Bureau of Investigation (FBI) and Hollywood, turning this local event into an international mystery.

The Region and the Town

Nome’s importance in Northwest Alaska cannot be denied. With a harbor, two airports, two radio stations, a satellite campus for the University of Alaska Fairbanks and a business district filled with well-known franchises, this town is a link to modern world amenities for the tribal villages in its vicinity.

Also, Nome has other attractions: the bars that aligned the town’s main thoroughfare known as Front Street. This street has been particularly popular among the visiting native villagers, in part due to the city’s loose restrictions on selling alcohol to the natives.

The town also sits in one of the harshest environments in the world. Nome is surrounded by tundra. Also, it sits on the Bering Sea coast. The sea is a storm-maker and can be treacherous. Rough seas and packed ice are norms in the waters outside this coastal town.

The Native Americans come from the Inupiat Eskimos. In fact, the town consists of the Nome Eskimo Community, a federally-recognized tribe. Although they make up the majority in the town, many live under subsistence programs offered by the state.

The Crime that Led to the Mystery

Rumors of the disappearance had been known for years. In fact, Pungowiyi, a tribal council member from Savoonga, had been calling for a federal investigation since 1998. But, it was the case of a crooked cop that led to wider media attention to the missing 24.

A police officer in Nome was accused of killing a Native American woman. This incident exposed some of the lingering hostilities between native villagers and the town’s police force. Also, according to the Anchorage Daily News, it galvanized tribal council members throughout the neighboring villages to speak openly about the missing 24.

The first to speak up during the winter of 2004 and 2005 was Apatiki’s mother. She wrote a heart-wrenching letter to the town’s newspaper The Nome Nugget, informing its readers of her son’s disappearance (Kizzia and Brant, 2005).

By the summer of 2005, Pungowiyi’s decade long plea for help finally arrived. The U.S attorney for Alaska, the commissioner for the state’s Department of Public Safety, and the FBI’s Behavioral Analysis unit from Quantico, Virginia came to town to investigate the disappearance.

“A concern expressed by the community is that there’s very clearly some pattern to these disappearances and there might be a serial killer,” U.S. Attorney Tim Burgess was quoted as saying in Anchorage Daily News.

When the FBI came to investigate, the villagers came forward with stories about their missing friends and/or relatives. Many expressed suspicions of foul play.

The FBI Behavioral Analysis conducted the interview and investigated every lead to find possible links among each victim.

“A concern expressed by the community is that there’s very clearly some pattern to these disappearances and there might be a serial killer,” U.S. Attorney Tim Burgess was quoted as saying in Anchorage Daily News.

In the investigation, there were several things the victims had in common. Many had been spotted at Front Street’s numerous bars, and others had Permanent Fund checks that had been cashed in and spent. On top of that, most of the missing people were male visitors.

In truth, the serial killer angle was one of many Burgess and the FBI were investigating. While there appeared to be patterns, they weren’t conclusive since the bodies of the missing had never been recovered.

The fact that many of the victims vanished without a trace, led other investigators (outside the FBI and law enforcement) to speculate that something supernatural had occurred.

In UFOlogist circles, Nome was considered an active place for “visitations.” In part, the presence of such phenomena as the Aurora Borealis (Northern Lights) in the long winter night sky may have attributed to this belief. Also, the town’s isolation may play a large role in it, as well.

For the most part, UFOs and the missing men were never linked. That is until 2009 when some film-makers got a hold of the story and came up with their own speculations.

A Movie Exposes the Mystery to the World

The Fourth Kind had a modest budget of $10 million. It ended up being a box office hit. Also, it garnered more attention to the case. However, the producers took many liberties with the film, including making up facts and creating fake news reports to promote the film (eventually, the distributor of film, Universal Studios, had to pay Alaska Press Club $20,000 for the fabricated news stories).

According to writer Gabrielle Pickard, the producers fabricated a story they claimed to be based on real events, in which Aliens were responsible for abducting the missing people.

Critics took notice and panned the film. In many cases, they pointed to the film’s inventiveness toward the victims’ families as a reason.

The Tragic Conclusion of the Investigation

The FBI came to a conclusion: Alcohol and the harsh environment (especially during the winter months) may have played a factor in the numerous disappearances. The finding also confirmed what was all too familiar throughout Alaska and beyond.

Nome was unique among hub towns. While other towns similar to it had strict regulations for alcohol consumption and sales to Native Americans, Nome had a lax system. This meant that many native villagers who came to town drank heavily, got into confrontations with others, or simply wandered into the surrounding tundra or sea, never to be seen again.

The findings reflect a persistent problem in Alaska. There are many places in the state to go missing. The environment can easily swallow up anyone, considering how lonely, vast, and rugged it is.

To date, Alaska has more reports of missing persons than any other state. In the year Apatiki vanished, more than 3,400 people were reported missing in the state alone. That’s almost the population of Nome.

Not everyone was satisfied with the report. The families and tribes wanted closure and wanted assurance that the missing will still be searched for. To date, the missing, including Apatiki, have never been found. Reward money has been offered to anyone who know of the missing people’s whereabouts. 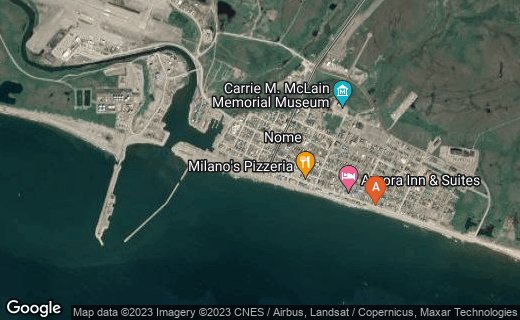 Other Article on Alaska

Nome from a Iditarod's Perspective