Nestled between three (yes, three) lakes at the bottom a valley, beneath a thick layer of grey clouds lies the small college town known as Edinboro, Pennsylvania.

Not the warmest introduction, but believe me when I say that I absolutely loved the 4 years I spent as a student at Edinboro University.

So you may be considering attending Edinboro and becoming a Fighting Scot in the near future. That's great! After receiving my BFA at Edinboro I am a proud graduate who received full time employment in my field just 2 months after walking in May 2011.

Edinboro is a great college, but like all universities...it has its quirks. There are numerous things you'll learn from locals and upperclassmen when you arrive on campus, but why not have a head start?

Consider this an insider's guide to Edinboro, including tips, fun facts, and a few fair warnings.

Disclaimer: This may not apply to all dorm buildings

When showering in the bathrooms, use the handicapped stall.

...Unless of course you live on a handicapped floor.

Most people are too afraid to use the handicapped stall, therefore they miss out on how incredibly awesome it is! They are more spacious, your towel and other dry belongings are less likely to get wet, there won't be any cold air constantly seeping through the cracks of the curtains and giving you goosebumps, and you can use the bench for toiletries and to prop your legs up to shave!

The best part? NO ONE USES IT, therefore the "gross, I'm sharing a shower with 20 other people" factor is lessened.

You know that saying "when it rains, it pours"?

Whoever originally came up with that was most likely talking about Edinboro, PA.

Did you know that Edinboro has an average of 65 clear days a year? How about that it has an average of 165 days of rain? Over 82% of a year in Edinboro involves doom and gloom clouds with little sunshine and a big chance of rain, and believe me...you'll notice.

I hate galoshes. I really do hate galoshes. I think rubber boots are hideous, but I bought a pair during my last year at Edinboro. Why? Because after awhile, on days when the rain gets so out of hand that you see ducks swimming in the grass...you get tired of your shoes squishing with every step as you walk to your car from class.

The town of Edinboro is technically sinking. When water levels rise (which they will), flooding occurs. You'll hardly get any classes cancelled for snow, but in spring there is hope for cancellation due to flooding! <--- Silver lining?

When it rains at Edinboro, it doesn't just rain for one day and get it out of its system. It literally pours non-stop for days. One week I counted the number of days it poured and got 5 straight days of squishy, cold, drippy, wet, miserable weather.

So as a fair warning, and a tip as well: Buy a small umbrella that you can keep in your bag or backpack at all times, and consider buying rubber boots.

Edinboro, being in the snow belt and surrounded by lakes, gets a considerable amount of snowfall each year. I grew up very close to Buffalo, NY so massive amounts of lake-effect snow were nothing new to me.

What really shocked me during my first year at Edinboro University was the lack of snow-removal.

You'd really think that being the #2 most handicapped-accessible school in the United States, with wheelchairs zipping by at every minute, that Edinboro would try a little harder to make it easier for the handicapped students to get around.

Well...that doesn't happen. In the Erie area, the way that plows work is that, rather than catch the snow while it's falling and get ahead of the game for road-clearing...they wait until all the snow has fallen for that specific storm and then begin plowing.

This means that once a heavy snowfall event arises, you will never see the black asphalt in the roads again. The plows do the best they can, but at that point all that happens is the 1 foot of snow on the road turns into 6 inches of thickly packed snow that freezes, becomes harder, and is never removed completely. Eventually you won't see a difference between roads and sidewalks, and forget driving in those conditions.

So a fair warning? Buy a good pair of boots that will keep your feet dry, not a pair of cloth boots that look awesome but provide no protection. If you buy cloth boots, not only will you ruin them and waste your money, but you'll have wet toes all winter.

The dorm buildings known as Lawrence Towers (most likely have now been bulldozed and replaced with the newest highland suite style dorms) consisted of Towers A and Towers B. It is believed that the 5th floor of Towers A was haunted after a music student hung herself in room 517. Rumors say you could hear faint singing at nights. The woods by Towers was also said to have paranormal occurrences.

If you're in the mood for Chinese food, don't go to Main Moon Buffet, go to Ocean Buffet. 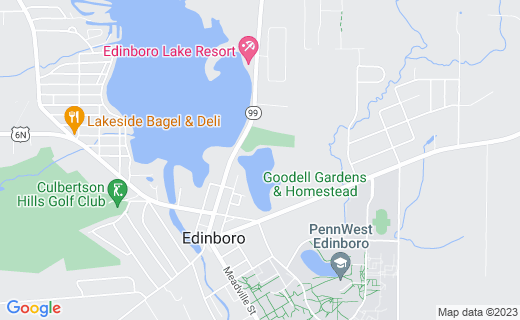 There is a very simple way to get to Peach Street from Edinboro that allows you to avoid the 79 and take back roads:

The ladies who work in the dining halls serving you food and ringing you up are super nice. Like, beyond nice. It's something I always loved about the campus, so rare to see people who are so happy to be there every day.

The cookies they bake at the ice cream vendor at Skipjack's in Rose Hall are to-die-for. Just make sure you get them on the day when they're baked fresh.

Sometimes the workers will even break up an extra cookie for pieces free to grab, so keep your eyes peeled when she's wrapping them.

Millcreek Mall on Peach Street in Erie is shaped like a gun.

Not sure if this was intentional, but it's a random bit of information that a lot of people don't pick up on.

Go to Dairy Supreme when it's open for season. Order anything, and get the crunch coat on top.

Some, if not most of the classrooms are freezing. Particularly classrooms in Doucette Hall and Wiley.

Even if it's 85 degrees outside, bring a hoodie to class. There's nothing worse than sitting through a 2 1/2 hour lecture and being frozen at the same time. The worst is when you get caught in one of Edinboro's famous downpours on the way to class, and then you're freezing and soaked from head to toe for the entire class.

Or should this be a warning? It is believed that Edinboro includes some sort of "digestion-aiding" additives to their food.

Whether or not this is a true fact, students most definitely race to the bathrooms during the first couple of weeks back on campus.

Bored on Peach Street? There's a pet store in the Millcreek Mall that lets you take the puppies out and play with them!

There is a nice residential area that runs behind 6N (Waterford St.) across the street from the Post Office. On Halloween night, there is a haunted house that is homemade and awesome. I would say it's more to the left side (near or on Shelhamer Dr.) Definitely worth going through at least once while you're in school.

Also, on the way there you'll see trick or treaters everywhere! It's like something out of a movie, there were never kids running freely through the streets like that in my hometown...but then again I didn't live in a very safe residential area like this one...

See if you can find this haunted house this October!

Go to John's Pizza. The pizza tastes best very late at night (maybe 2:30 ish). Everyone loves John's pizza (perhaps because it's practically the only place in town to get pizza, they're open until 3:00 AM, and most people go their to sober up when all the bars close so they're drunk and everything tastes good when you're drunk) but me...I was never the biggest fan of John's.

I never went to John's for their semi-average pizza though. I went there for the taste-bud-stimulating joyride known as their chicken finger basket. Their honey mustard is amazeballs, and the waffle fries will blow your mind. Get a honey mustard and a bbq sauce...it's fun to switch off the different flavors.

As long as we're on the topic of food, I must mention Sheetz.

If you are not from Pennsylvania (like me), chances are you've been missing out your entire life on this made-to-order wonderland.

Pretty much everything is phenomenal, but you can't attend Edinboro University and live 2 miles from Sheetz for 4 years without trying their spicy chicken sandwich on a corn-dusted roll with an order of their fries. Not up for chicken? You still have to get the fries, and that is an order.

There's a reason why this place has it's own Facebook fan page.

As long as we're still on the topic of food-you-must-eat, you can't forget Steak n' Shake.

Gudgeonville Bridge, located in Girard (close to Boro) is said to be haunted. Some believe it is haunted by a little girl who fell to her death down the cliff. Others also believe you can hear the hooves at night after a mule was beaten to death by its drunken owner for refusing to cross the bridge.

I visited this bridge my freshman year with Edinboro locals. Whether you believe the myths or not, this bridge is still creepy as Hell late at night!

Edinboro University at one point had an underground tunneling system. The tunnels still exist, but after a collapsing catastrophe they were quickly sealed off and deemed dangerous.

You can still find entrance points for tunnels around campus, so use your investigative skills and see how many you can find!

What tips, tricks, and facts did you pick up on while attending Edinboro University? Share them in a comment below!