Pens were first thought to have been invented by the ancient Egyptians and the first ball point pen was actually patented by an American named John Loud.

Ref. Wikipedia "The first patent on a ballpoint pen was issued on 30 October 1888, to John Louda leather tanner, who was attempting to make a writing implement that would be able to write on the leather he tanned, which the then-common fountain pen couldn't do. The pen had a rotating small steel ball, held in place by a socket. Although the pen could be used to mark rough surfaces such as leather, as Loud intended, it proved to be too coarse for letter writing and was not commercially exploited."

There was what is called prior art with respect to the ballpoint pen so from an innovation perspective it was not a completely original idea in itself. The original patent was allowed to lapse when the product failed, probably because the pen relied on an ink soaked pad and used ordinary ink which was thought to be messy and not very practical.

Laszlo Biro, with the help of his brother George, came up with 2 original ideas with respect to the design of the ballpoint pen. First of all the pen was designed with a hermetically sealed reservoir to store the ink internally and secondly that the ink used was changed in consistency to be thicker and quick drying. The reason for this was so that it did not flow past the ball and consequently did not smudge when applied to the paper. These new features introduced originality which was used to overcome design flaws in the first version of the ballpoint pen and allowed Laszlo Biro to register his own patent in 1938.

So it could be said that although Laszlo was not the first inventor of a ball point pen, strictly speaking he was the first to come up with a working design that was useful and practical in nature. 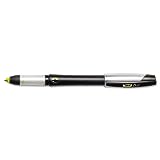 A final and perfected version of the ballpoint came into existence in 1942 but it still faced major competition from the fountain pen. Initially it found a niche market as a fashionable and useful accessory, but then made a major breakthrough when it was discovered that the pen could be used at high altitude. This technological advantage resulted in the pen being adopted by the British and American airforces giving the ballpoint pen a captive market.

Further inroads were made in its popularity when, with a much-reduced price tag, the pen found it’s way into the British market place. Laszlo Biro displayed entrepreneurial flare by managing to secure significant financial backing for the manufacture of the ballpoint pen in Argentina but ultimately lost control of the Biro company along with the patent rights he had established. These passed to another individual called Henry Martin who effectively took over production of the ballpoint pen from Laszlo Biro.

There is no information available to establish whether this was due to business naivety or whether that was the intention and that from Biro’s viewpoint he achieved his objective and was simply disposing of a valuable asset.

It cannot be denied that Biro Swan under the control of Martin enjoyed some success and established the ballpoint pen as the dominant design in the market. However it is mostly due to the efforts of Marcel Bich, who founded a manufacturing company to make his own patented design of ballpoint pens, that the ballpoint pen holds it’s current market position.

The BiC Crystal, which is the direct descendent of the Biro, holds the largest market share today. This has been achieved through a policy of continuous improvement and strict quality control practices coupled with process innovations geared towards ever-lower production costs and subsequent selling price, some of the key characteristics of a successful innovation process.

Clearly the ballpoint pen had found a market, but it took the process innovations and business acumen attributed to Bich to really establish the ballpoint pen on an international scale.There is practically no country in the world today that does not use a ballpoint pen and production actually takes into account the geographical destination for its pens to ensure that ink viscosity and ball/mount tolerances are suited to the environment where the pens are intended to be used.

The Future of Ballpoint Pens

Which is your preferred option for writing in ink

Feel free to share your thoughts on Ballpoint Pens