Surfing was his world, according to his girlfriend Alana Noakes.

24 year Benjamin Linden had travelled up to a popular tourist area at Wedge Island, just north of Lancelin, on the Western Australian coast, from his home in Perth, for a day's surfing.

It was 9am on the 14th of July, 2012, and the day was crisp, bright, sunny and more importantly, the ocean offered perfect breakers for surfing.

Ben Linden was about to catch a wave about 100m from shore when what is described as an enormous great white shark - somewhere in the region of 5m (16ft) - appeared and took him in one bite, breaking his body cleanly in half.

A man on a jetski nearby witnessed the attack, and saw the waters rapidly filling with blood.

He had a friend on tow at the time, so raced off to shore to deposit his mate to the safety of dry land, and returned to try to rescue the remains of Ben Linden.

By the time he got back, the waters had all turned red, and the shark was circling.

He tried to grab the body, but the shark went for his jetski, trying to knock him off, so he had to retreat.

He saw the shark then take the body off into deeper waters.

Death from shark attack when cut in two

The human body contains around 8 pints of blood.

Sliced in half, you would expect the aorta, the main artery that leaves our heart and passes down to our abdomen before separating out into our femoral and inguinal artieries, to be severed.

In spite of those horrendous injuries, the heart would continue to beat for 2 or 3 minutes more allowing the rapid spillage of about 4 pints of blood, assuming one half of the body is inside a shark by this time.

Ben Linden would not have suffered, as his brain would have shut down immediately at the shock of what happened to his body.

When the heart finally stops beating, no more blood is expelled from the body.

This is partly how scientists can determine the time of death in many murder or accident victims.

Great white sharks and their diet

One good meal can last them for up to 2 months, sometimes 3 in times of famine.

The reefs around Wedge Island are packed with seals. In fact, there has been a population explosion of seals, the natural prey of great whites, or white pointers as they are known in Australia.

Despite reports of huge pods of great white sharks congregating in unprecedented numbers in areas of Western Australia where people bathe, there are relatively few shark attacks.

We are not their normal diet.

This shark, however, seems to be a rogue shark in the sense that it has developed a taste for human blood. It came back to finish off the meal it started.

Many victims of great white shark attack survive because the one test bite these big, dangerous sharks take of us, is usually enough for them to know we are not seals, have too many bones, and our blood is not salty enough for them.

The shark then retreats. Sometimes we die because of the damage inflicted by that one bite, but mostly we survive.

This shark, nicknamed Brutus by locals, likes the taste of humans, unusually.

Great White Shark: Beyond the Cage of Fear
Buy Now

Do you think it's:

Western Australia has earned the reputation of being the most deadly for shark attacks, because in recent months, a further 4 people have been killed by sharks.

All of the reports implicate a great white.

On the 5th of September, 2011, 20 year old Kyle Burden was cut in half by what is believed to be a 'large white pointer" at Bunker Bay, near Dunsborough, South Western Australia.

Just one month later, on the 10th of October, 2011, 64 year old Bryn Martin disappeared while swimming off Cottesloe Beach. All that was ever recovered were his swimming trunks, and experts decided the tears on them matched that of a great white shark attack.

On the 22nd of October, 32 year old George Thomas Wainwright was attacked underwater while scuba diving off Rottnest Island. All his friends on the boat witnessed were a huge number of bubbles coming to the surface, followed by the body of Mr Wainwright, which had "shocking injuries". A great white is suspected.

On March 31st, 2012, young father Peter Kurmann was attacked while diving off Stratham Beach. The attack happened in deep water, and his brother on the boat only saw an enormous dark shape in the water. Mr Kurmann's injuries were horrendous and fatal, which suggest he may well have been cut in half too. Experts believe the shark that attacked him to be a 16 foot white pointer.

I can't help thinking that the same shark is involved in each case.

If all 4 - 5m long great whites were man-eaters, we would be hearing about shark attack deaths daily, not just now and again (Australia normally sees one fatal shark attack a year).

The question is, when is it going to attack again?

Not if, but when.

The Western Australian authorities set up a shark trap to try and catch the shark, but the baited hooks were removed hours later.

Great white sharks are a protected species in Australia, but exceptions can be made.

This shark needs to be caught and removed from the waters, for the safety of the people who use the sea for recreational activities.

The Western Australian coastline is 20,781km (12,912miles) long, but that is nothing to an adult great white shark who can swiftly cover those distances easily.

Let's have a look at where those fatal attacks have taken place. 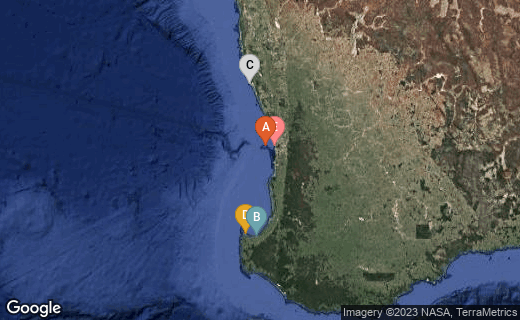 As you can see, they are not very far apart at all.

Everyone swimming in this whole stretch of coastline is at risk from this shark until it is caught.

There are thousands of great white sharks in this general area, but only one is a killer.

Brutus has to be found, or else there will be more deaths.

Within hours of Ben Linden's tragic death, surfers were back in the same waters where he was killed, despite shark warning notices and the beaches being closed.

By the law of averages, they would have been safe enough.

The killer shark had been fed, and would not have been looking for more victims at that point in time.

Ben Linden's long-time girlfriend, Alana Noakes, left a beautiful tribute on his Facebook page, which I am happy to share with you.

"I'm devastated to let everyone know that my beautiful man, Ben Linden, was the surfer who was taken by the shark at Wedge this morning...

Ben was the most amazing man, he lit up the lives of all who knew him.

He was the most talented, good-natured, beautiful person I've ever met.

He was the love of my life, my best friend, my rock and my soulmate.

I, like everyone who knew him, absolutely cherish every moment of the last 8 years I spent with him.

He has helped me to be a better person, to learn to 'ride the waves' of life.

Let's remember that he was doing something that meant the world to him. Surfing was his soul, his life, his culture and his passion.

He loved mother nature in all her glory and is now in her arms eternally. Let's rejoice in that."

To Alana, and to Ben's family, we at Sharkfacts send our deepest condolences.