In this psychology information article, we look at the school of behaviourism. This is one of the doctrines in the field of psychology and focuses on behaviour as a learned phenomenon.

This article has been designed for simplicity and focuses upon the basic fundamentals of behaviorism as a school.

It is not surprising, therefore, that we shall be looking at Skinner, Thorndike, Watson, Pavlov, Bandura and Rotter as major contributors. Here you will also find some great videos to accompany and enhance this article's reading.

The School of Behaviourism

Key contributors, amongst many others, in the school of Behaviourism include:

Laboratory dogs learned or were conditioned to salivate without food through behaviour modification techniques associated with reward.

When they heard a sound (bell) they were rewarded with food.

It was found that over a period of time, that the dogs still produced saliva, when the bell sounded, despite the omission of the reward.

Thorndyke's Cats And The Puzzle Box

Animal intelligence: an experimental study of the associative processes in animals
Buy Now

Watson's Albert and the Rat

Unlocking the Animal Mind: How Your Pet's Feelings Hold the Key to His Health and Happiness
Buy Now

Skinner and the Skinner Box 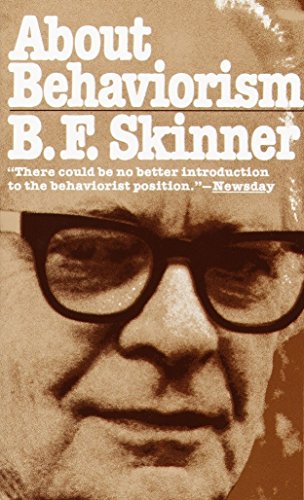 Skinner invented the Operant Conditioning Apparatus (Skinner Box) where a rat is placed in the box until he accidentally presses a lever. As this was a controlled experiment, no food was returned on this action, but later the lever was attached to operate as a food dispenser.

The rat soon learned that pressing the lever would return a food pellet or reward (positive reinforcement). When the food dispenser was disconnected, the rat continued to press the lever. Skinner concluded that the rat had been operantly conditioned

Skinner's ideas had a marked effect on education.  These concepts are still used in education today.

These Behaviour Modification techniques can be used in training people as well as animals.

As an example in training professional dogs, Skinner devised a simple and effective programme to change behaviour.

The Key To Behaviour Modification Techniques

The key to behaviour modification techniques is that methods need to be consistent and continuous. The message has to be clear and 'black and white' in the method so as it doesn't confuse the target.

So what do I mean by target? Behaviour modification techniques are formed from especially designed programmes, tailor-made to the person or animal, in order to produce the desired result. The target, for example, could be a dog who needs to be trained for excessive lead pulling. He would be rewarded with biscuits and praise when he didn't pull and made to stop when he did pull with a firm 'no'. The programme would be the sequence, action and goals that need to be implemented to produce the desired outcome - i.e. to walk without pulling. It should be set and there can not be any deviation away from the main objective. If the trainer deviates, then the training will fail.

The problem with behaviour modification techniques can stem from a too complicated programme - one that is not achievable for the target. This is why the design of the programme has to be realistic.

Ethical considerations have to be thought of. Cruelty might work to create the desired behaviour, but this is not ethical. Behavior modification should be formulated on learning in a non harmful way.

The school of behaviourism believe that children are a blank slate and all behaviour is learned. They tend to side more with the ideas that animals are a product of their environment rather than their nature - a very controversial idea on the nature versus nurture debate.

Not everyone agreed wholeheartedly on the radical behaviourism of Skinner and Watson. All behaviour is not just explained by stimulus, response and reinforcement, but also by cognitive processes.

Julian Rotter invented the term Social Learning Theory. He believed there was more to people's behaviour formulated upon humans having expectations on the effects of their behaviour, depending on the type of reinforcement they get. Additionally, there is also an emphasis on values for which they apply that behaviour. Rotter developed the notion of the locus of control.

Where Is Your Locus Of Control?

Depending on their upbringing, there are two basic types of people:

Albert Bandura was another major contributor in the school of behaviourism. He advanced further ideas on behaviourism in a social context in the 1960s when he coined the term Socio-behaviourism and, later, social cognitive theory.

According to Bandura, behaviour doesn't have to be directly reinforced to effect its outcome. Learning through observing others and watching the consequences of their actions can suffice. The form of learning is called Vicarious Learning or Observational Learning.

In his Bobo Doll Experiments in 1963, he used two groups of children. He exposed the experimental group in witnessing an adult in a room of toys being violent to an inflatable 'Bobo' doll whilst the control group watched an adult playing with it in a non violent way.

Each child was left alone and observed on film. It was found that the experimental group played more aggressively than the control group, as can be seen in the video. He concluded that children will spontaneously imitate the behaviour of a model without obvious reinforcement.

This experiment was important as it showed the processes of imitation and modelling can have a profound and influential affect on behaviour. We are, therefore, easily influenced by what we see. In today's world, this idea has been invaluable in terms of therapy.

The School Of Behaviourism - A Final Thought

As you can see in this brief trip around the major contributors through the school of behaviourism, in terms of psychology, these ideas have become fundamental in understanding how we learn and how this can be achieved effectively. In understanding ourselves, we can find ways to becoming more successful and happier people, thereby creating a successful society. Today, behaviour modification techniques has created new ways of thinking in our everyday lives, taking approaches away from traditional corporal punishment techniques to more empowering ones. Is this a good thing? Well, this is something for you to decide.