Story of the World by Susan Wise Bauer is a popular series of books for homeschooling elementary world history. However, some homeschoolers choose it often because they feel like there's nothing better available. But there are some other very good options for world history, if you would rather avoid the Bauer series of books.

The Story of the World series has both ardent fans and ardent critics. It has come under criticism for some inaccurate dates and concern that it ignores archaeological evidence in favor of a good story. Some homeschoolers also say that's its too simplistic.

I have all of the books I've listed here. I think it's a good idea to read several different books through the elementary years to give your child a strong foundation in world history. Each book has a different approach, which can make up for deficiencies you may find in a particular book or series. 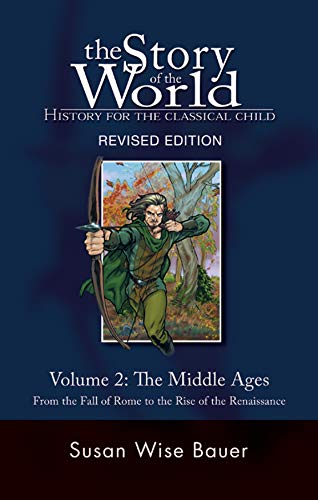 Story of the World

Story of the World is a series of four volumes that cover ancient times up to the modern age. The series is appropriate for 1st grade and up. This is a classical approach to teaching history. Events are told using a story telling rather than textbook format. It also includes legends and myths.

The books have been criticized for having a lot of historical inaccuracies. However, this is probably true of all history books aimed at young children. They are simplified to make them understandable and appealing to the target age group. Some secular homeschoolers and moderate Christians have criticized the books for presenting Bible stories as historical events while some conservative Christians have criticized the series for not taking the Bible literally.

The series is an easy to understand and comprehensive introduction to major figures and events in history. It also includes audio book options, activity books and test books, so it can be used as a full home school history curriculum. Overall, I think these books are a good basic introduction to history for young children.

Sample Chapter from Story of the World

The Complete Book of World History

I really like this book and will likely use it next year when my older child starts 3rd grade in addition to Story of the World. The book is listed for grades 4 to 6 but I think a lot of 3rd graders would have no problem understanding it, if they already have some world history background. The book has about 250 pages of text starting with the first humans and concluding with the end of the Cold War. This is a good basic overview of history for late elementary students. Events are told in a textbook, rather than a storytelling, format. There are no questions or activities in the book, which is something many homeschoolers may expect in a textbook.

The Usborne First Encyclopedia of History

The Usborne First Encyclopedia of History is a great option for kindergarten and 1st grade. However, it could also be used with preschoolers. It starts with dinosaurs and ends with the Second World War. It has bright, colorful pages with small amounts of text. Each topic covered has a two page spread. It covers Ancient Rome, Ancient Greece, African Kingdoms, the Celts, Ancient China, the Incas and much more. This book is a good option for younger kids who may not be ready to listen to a book like Story of the World.

The Usborne Book of World History

The Usborne Book of World History is appropriate for 1st grade and up. This book starts with human settlement around 10,000 BC and ends with Western ideas in the East. This is a really good basic overview of history. This was my older child's first introduction to world history because I wasn't aware of The Usborne First Encyclopedia of History. It has lots of pictures with an explanation under each. I have one major criticism of this book though. It has some very graphic violent pictures. It isn't too many but children are easily disturbed at this age. I couldn't let my child look through the book on her own because I was concerned that she would see something upsetting.

Little History of the World

Little History of the World by E. H. Gombrich has the same narrative style as Story of the World. It was first written in the 1930s and rewritten and published again in 2008. Events run from prehistoric times to the end of World War II. The book will be very engaging for young children and is very affordable compared to the Story of the World series. It's probably most appropriate for 2nd grade and up.

Some people have criticized the book for having a Christian bias although the author was Jewish. He does talk positively about religion and faith but it's his style of writing. He isn't doing it in a way that promotes a religious agenda. However, some secular homeschoolers may be turned off by this and feel that it isn't an objective account of historical events. This book is available to download to Kindle apps and eReaders.

This is a list of some other available options that you can look into. I haven't used any of these books.