The Best Places for an African Safari

Find out more about the best places to do a African Safari.

In the past making a Safari in Africa was originally a hunting expedition, especially for Central Africa and South Africa safaris. These traditional safaris were made by a group of hunters who entered the African forests and Savannahs for several days to hunt down the African wildlife.The native carriers, would carry the equipment and supplies for the group.

Currently, the term Safari often applies to people riding in an 4-wheel drive car to observe and film or photograph the wild animals in African wildlife reserves or parks. Lions, elephants, chitas, gnus and other large animals are usually the main attractions.

Making a safari in Africa is an experience that everyone should do at least once in their lifetime. Observing an animal up close in their natural habitat is simply an incomparable experience, and that anyone will remember forever.

The southern part of the African continent is full of safari parks and wildlife reserves, but, regarding to the classification of the best African safari place or tour, it will all depend on personal choice.

Africa has many wildlife reserves that can be visited in a safari style, here you can find information on the best places to do a Safari in Africa 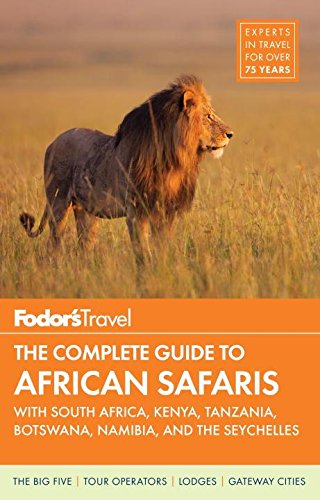 The Serengeti National Park is one of the most popular destinations for a safari in Africa. Famous for its wildlife, here occurs annually the Great Migration of more than a million wildebeest and 200,000 zebras.

The park is situated on a plateau between the Ngorongoro Highlands, in northern Tanzania and the Masai Mara Reserve in Kenya.

The Serengeti National Park was established in 1951 and extends for 14,763 km2 (5,700 sq mi) of grassland plains and savanna as well as riverine forest and woodlands.

One of the best times to visit the park is in May when the vegetation becomes dry and sparse, then you can observe the wildebeest and zebras in huge groups in an authentic wildlife spectacle .

The Kruger National Park is the largest game reserve and the most famous in South Africa. It was the first South Africa's national park, founded in 1926, it extends over an area of almost 20000 km 2.

All the Big Five game animals can be found at Kruger National Park together with more than 100 reptiles that include the black mamba and more than 3000 crocodiles.

It has more species of mammals than any other African reserve, including cheetahs, giraffes and more. Unlike most other safari parks, the Kruger Park is a kind of "drive-in" destination with an excellent infrastructure and lots of places to stay within the park, from luxury lodges and camps.

The Masai Mara park is not the largest in Kenya (With an area of 1,510 km2), but it is probably the most famous. The total area of the park lies in the enormous Great Rift Valley that extends from the Mediterranean Sea to South Africa.

It was inaugurated in 1961 with the goal of protecting the fauna of a region that was subjected to continuous indiscriminate slaughter at the hands of poachers.

The Masai Mara is Kenya's most popular Safari Park and each year the park is visited by thousands of tourists, that come here to watch the animals in the wild and the annual migration of wildebeest and zebra.

The "Great Migration" takes place every year from July to October, when millions of wildebeest and zebras migrate from the Serengeti in Tanzania.

There are also rhinos, elephants, hippos, giraffes, crocodiles and a large number of amphibians, reptiles and birds.

The protected area of Ngorongoro in Tanzania, an ancient volcano that has collapsed and formed a crater. The steep sides of the crater became a natural barrier for a wide variety of wildlife. Currently is also one of the areas in Africa where we are most likely to see the endangered Black Rhino.

The Chobe National Park is located in northwestern Botswana and offers some of the highest concentrations of wildlife in Africa. The park is probably best known for having a large African elephant population, now about 50,000 elephants, probably the highest elephant concentration of Africa.

They are more visible during the dry season, between May and September, when they gather around the water sources, especially the Chobe River. It was established in 1967 and has an area of 11,700 km2.

This park has various ecosystems, and from them, stand out the lush forest in the north to the savannah in the south, it has many dried ponds that are flooded with the heavy rains and rising rivers at certain times of year, as they are from October to April, in the rainy season there are generally torrential rains. The most important rivers of this park are the Ekuma and Oshigambo rivers.

Amboseli National Park is one of the most popular tourist attractions in Kenya. Although small in size compared to other parks, the park sits at the foot of the highest mountain in Africa, the Mount Kilimanjaro in Tanzania.

The Kilimanjaro snowy peak offers a stunning setting in one of Kenya's most spectacular displays of wildlife. The park also offers visitors the opportunity to meet the Masai people.

The land belongs to the Maasai nation, the legendary warrior tribe of nomadic shepherds who feed on a mixture of blood and milk. The Masai still live today as always in reserve that surrounds the park, grazing their herds in search of better pastures

Located in eastern Zambia, South Luangwa National Park is centered around the Luangwa river with it's crocodiles and hippopotamus The park is probably best known for its walking safaris, where you can actually walk through the woods on foot and see the animals with the help a guide. The best time to do a safari inside the park is during the dry season from April to October.

Hwange National Park is one of the best wildlife refuges in Africa and is home to large herds of elephants, buffaloes, zebras and also has a large concentration of giraffe. This safari park is located in western Zimbabwe on the main road between Bulawayo and the world famous Victoria Falls.

The park hosts more than 100 mammal and 400 bird species, these include 8 large carnivores and 19 large herbivores. Some of major predators found in the park include lions, leopard, spotted hyena and the cheetah.

Located in Botswana, the Moremi Game Reserve covers almost one third of the Okavango River Delta, a diversified habitat where desert and delta join in forests, lakes, meadows, woods and pans.

The Delta contains the full spectrum of species of birds and animals, including lions, cheetahs, hippos and crocodiles. Moremi is best visited during the dry season, from July to October, when seasonal pans dry up and the wildlife concentrates around water.

I hope you found this hub about the Best Places for an African Safari interesting . If you enjoyed reading it you can vote it up, you can also share it with your friends.