With several days worth of buildup and anticipation, the promised DNA results and additional photos leave the wondering public no better off than we were with the photo released earlier this week.

According to Tom Biscardi, there were three DNA tests done. The first was inconclusive. The second came back human and could have been a contaminated sample or transfer DNA from moving the body. The third, a sample taken from the intestines, came back opposum and could be from digested material rather than the animal itself.

The much talked about and hoped for Bigfoot photos are not much better. The first is a close up shot of the creature's tongue and teeth in an effort to prove the first photo was not a mask. The second photo is a wooded scene supposedly showing one of the living, bi-pedal creatures that were stalking the finders as they removed the body from the woods.

A team of scientists from around the world will begin research and autopsy on the body next week. In the meantime, I'm keeping my wait and see attitude and hope some better information and photos will be provided in the coming weeks.

Scroll down to watch video of the press conference.

I'll post copies of the photos that were released today, as soon as possible. Check back. 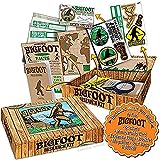 The Bigfoot body, if that is really what it is, was found deep in the woods of Northern Georgia by Matthew Whitton (AKA Gary Parker) and Rick Dyer.

Matthew Whitton is a Georgia police officer who is on administrative leave after being wounded in the course of duty. Although he refused to comment on his personal or professional life during the press conference.

Rick Dyer is a former correctional officer and a tow truck driver.

According to Matthew Whitton during the press conference, the two were hiking through the woods in Northern Georgia on a camping trip in early June when the happened upon the body lying near a stream. "I didn't believe in Bigfoot at the time. ... But you've got to come to terms with it and realize you've got something special. And that's what it was." The body was relatively fresh, maybe two days old, and had "guts hanging out." Whitton remained in the woods with the body for approximately 9 hours while Dyer returned home to get help and his tow truck. Whitton, Dyer and three additional men dragged the 500lb body out of the woods and onto the tow truck where it was then covered and transported. They then put the bigfoot body into a freezer to preserve it.

Since finding the body, Whitton and Dyer have struggled with how to handle the situation. They were not "bigfoot hunters," days Whitton, "We were not looking for bigfoot." When asked why they did not contact authorities such as the fish and game commission immediately upon finding the bigfoot body, Whitton replied, "I really don't see any reason to call them." He continued to explain that they did not know what to do or who to trust. They did not want someone to steal the body from them, nor do they want the habitat overrun with hunters and destroyed. They created a company that offered Bigfoot expeditions called Bigfoot Global, LLC., created the website BigFootTracker.com, appeared on an online BigFoot radio station, received death threats, and put up fake videos on YouTube to distract some of the bigfoot enthusiasts who were harassing them. They finally hooked up with Bigfoot investigator and hunter, Tom Biscardi, and scheduled today's press conference.

when asked about the exact location of the find, Whitton described it as remote, miles off the main road, and wooded. He also claims to have seen three live bigfoots watching them in the woods when removing the body. The live bigfoots paralleled them, watching, but did not make any noises and did not attack. They described the live creatures as bi-pedial, walking upright approximately 50 feet away. They were not armed and Whitton admits, "Yes, we were afraid of them." Whitton refused to disclose the exact location of the find and stated "My intention with this is to protect the species." Biscardi clearly stated, "We don't plan to kill one," although, he did state they have intentions of returning to the location with the intent of capturing one, studing it, attaching a transmitter, and releasing it into a protected area.

Biscardi claims there are 3,500 to 7,000 bigfoots living in this land. When asked why it has taken hundreds of years to find a bigfoot body, he responded with a few good questions of his own. Despite all our technolgy, why have seventy-two plans that have crashed on land over the United States in the last 25 years not been found. For that matter, why couldn't Steve Fossett's body or plane be found in a known 200 mile radius. "When is the last time you found a bear skeleton in the woods?" While those are valid points, it does not prove that a bigfoot body has, in fact, finally been found. So far, only 8-10 people have actually seen the body, so we will just have to continue to wait.