Today he may be best known for the brand of rum that bears his name, but Captain Morgan is no mere marketing creation. Sir Henry Morgan was a real person, whose exploits in the Caribbean in the late 17th century made him both famous and extremely wealthy.

Some accounts describe Morgan as a ruthless, bloodthirsty pirate, others say he was a patriot who protected the interests of England during the European expansion into the New World. There is probably some truth contained in both accounts.

Little is known of Henry Morgan's early life. He is believed to have been born to a prosperous, well-connected family in southern Wales in the year 1635. He lived during the English Civil War, in which supporters of King Charles I (Royalists) fought unsuccessfully to preserve the monarchy against those seeking to establish a republic in England (Parliamentarians).

Although Morgan was too young to fight, his two uncles served as officers during the war, one on each side of the conflict. His understanding of military tactics — which would serve him well in the future, when he would consistently overcome superior forces in battle — is thought to have come in great part from these men.

Morgan earned his fame and wealth in the Caribbean in the late 17th century, but how he got to that part of the world is uncertain. We know that when he was about 19 or 20 years old, he was part of Oliver Cromwell's 1654 expedition to capture the Spanish-controlled island of Hispaniola (now Haiti) on behalf of England. One version of the story has him in the Caribbean after being kidnapped, and joining Cromwell there to escape from indentured servitude. A more likely explanation is that Morgan, while still living in Wales, volunteered to be part of the expedition.

Cromwell's efforts to take Hispaniola were unsuccessful. Following his defeat there, he regrouped and managed to increase England's foothold in the Caribbean by successfully invading Jamaica. As an English colony, Jamaica would serve as the base of operations for all of Morgan's adventures from that point on.

Details of Morgan's career over the next few years remain sketchy, but it is known that by 1663 he was serving in the fleet of Commodore Christopher Myngs, an English privateer, as captain of his own ship. As part of that fleet, Morgan took part in successful raids on Santiago de Cuba and Campicho, Mexico. Later that year, while serving under Captain Jack Morris, Morgan also participated in raids on Villahermosa and Trujilo, Granada.

Pirates, buccaneers and privateers - they all engaged in the same sorts of activities, raiding vessels at sea and coastal towns, yet they were not exactly the same thing. To learn more:

Privateers were permitted to keep a portion of any wealth they captured, and by 1665 Henry Morgan was a wealthy man. He married his cousin, Mary Morgan, in Jamaica around this time, but settling down was not his intention, as he went on to serve under the privateer Edward Mansfield. Mansfield had been hired by England, but the buccaneers in the Caribbean had elected Mansfield as their own leader, as well. Morgan made quite a name for himself among this group, and when Mansfield was killed in 1666 during a raid, the buccaneers chose Morgan to take his place as their "admiral".

One of Henry Morgan's most infamous raids occurred in 1667. He'd been given command of ten ships and five hundred men, and sent on a mission to free a group of English prisoners being held by the Spanish in Puerto Principle, Cuba. The mission was a success, but Morgan and his crew were unhappy with the amount of treasure captured on the raid, which, as privateers, they were entitled to keep a percentage of. To make their voyage more profitable, Morgan elected to take his forces on to Porto Bello (now known as Portobelo), a Spanish harbor in the north of what is now Panama.

Over the preceding hundred years, the English had made many attempts to take the heavily defended town of Porto Bello, which was by now generally considered to be impregnable. In terms of an attack from the sea, this was probably true, but Henry Morgan didn't attack from the sea. He harbored his ships miles away, and attacked by land, under cover of darkness.

Morgan and his men not only took the town, but also fought off an additional 3,000 Spanish troops that were sent in response to the attack. Morgan held the city for two months, eventually accepting a very large ransom payment from the Spanish to leave. Morgan was already a rich man, but thanks to his victory at Porto Bello, he was now enormously wealthy, famous throughout the Caribbean, and a hero in his homeland of England.

Clearly, the attack on Porto Bello had exceeded the authority given to Morgan as part of his rescue mission to Cuba. Technically, this made him a pirate, rather than a privateer, but the raid had made him such a hero in England that the English government was willing to look the other way, and let Morgan go unpunished.

Some years later, a book written by Alexandre Exquemelin, History of the Buccaneers in America, described Morgan's raid on Porto Bello as being extraordinarily savage. According to Exquemelin Morgan had tortured and killed numerous people, at times using monks and nuns as human shields, and he and his crew engaged in an extended, drunken campaign of rape, pillage and murder following their victory.

Exquemelin had been a member of Morgan's crew, so his description of events were taken as fact, which accounts in large part for the bloodthirsty reputation Morgan has, even to this day. As will be discussed later, however, there is reason to believe that Exquemelin's version of events is not entirely accurate.

Loss of the Oxford

After Porto Bello, Morgan was so famous, and his record of success against the Spanish so great, that he was made an Admiral of the Royal Navy, and given command of a warship, the Oxford. With the warship leading his fleet, Morgan intended to attack Cartagena, a Spanish port located in modern-day Columbia, but this would soon become impossible.

In 1669, during a drunken party on the Oxford, the ship's storeroom of explosives was accidentally ignited, resulting in the loss of the ship and hundreds of men. Only by chance was Morgan himself among a small number of survivors.

Without his warship, Morgan abandoned plans to attack Cartagena, instead using the rest of his fleet to plunder the Venezuelan towns of Maracaibo and Gibraltar. Following that, on his return voyage to Jamaica, Morgan encountered and captured three Spanish ships at sea.

Thanks to these successes, plus the support of the Governor of Jamaica (who saw Morgan as his main line of defense against the Spanish), Morgan was not punished for losing the Oxford. Instead the Jamaican governor made Morgan commander-in-chief of all warships in Jamaica, and gave him a blanket commission to wage war against the Spanish in the Caribbean.

In late 1670, commanding a fleet of 38 ships and 2,000 men, Henry Morgan set out on his new flagship, Satisfaction, with the intention of attacking Panama. On the way to Panama City, Morgan captured the island of Santa Catalina and the town of Chagres in northern Panama. Unfortunately for Morgan, these raids resulted in the loss of his new flagship and three or four other vessels — not to enemy attack, but because he'd accidentally run the vessels onto the reef.

Despite these losses, Morgan continued his advance toward Panama City, following the Chagres river. Many men were lost to disease, starvation and attack by natives during the grueling journey, yet Morgan was still able to successfully capture the city in early 1671.

Apparently residents had somehow been alerted to the impending attack, as most of the city's treasures had been removed prior to Morgan's arrival. The city itself was burned at some point following Morgan's attack, although the cause of the fire is not known.

By some accounts, Morgan brutally tortured the people of Panama City in an attempt to uncover where the valuables had been taken, but to no avail. Morgan's crew, unhappy with the small reward their efforts had gained them, suspected that Morgan was hiding a portion of the treasure, and some even spoke of mutiny. Morgan left Panama at that point, returning to Jamaica with what small treasure had been collected, leaving his mutinous crew behind. 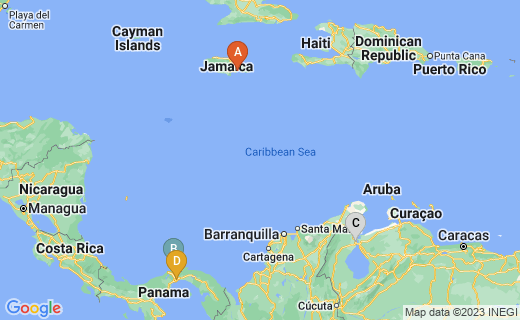 Porto Bello, where one of Morgan's most infamous raids occurred in 1667.

After losing his warship, the Oxford, in 1669, Morgan elected to raid Maracaibo, rather than Cartenega.

Morgan's 1671 raid on Panama City was illegal, and ended his career on the high seas.

Unknown to Morgan, a peace treaty had been signed in 1670 between England and Spain, making the raid on Panama an illegal act of piracy. This time, England could not ignore or gloss over the problem, and both Henry Morgan and the governor of Jamaica were recalled to England to stand trial.

Whether due to family connections, his success in proving he'd been unaware of the treaty, or the continued interest of King Charles II in seeking Morgan's advice regarding Spain (or a combination of all of these), Morgan was not put to death for his actions in Panama. 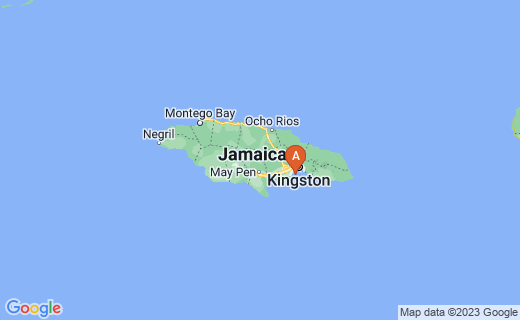 Sir Henry Morgan died and was buried in Port Royal, Jamaica. His grave has since been lost to the sea.

In fact, the King's respect for Morgan was so great that, in a bizarre turn of events, Morgan was actually knighted, and returned to Jamaica as Lt Governor in 1674. He lived out the rest of his life in the city of Port Royal, dividing his time between his duties as Lt Governor, overseeing his sugar plantations, and, according to most sources, drinking heavily with his old friends.

It was during this time that Exquemelin's History of the Buccaneers of America was published. Morgan, furious about the picture the book presented of him, filed a libel suit against the publisher. By proving in court that much of the book's content was false, Morgan was able to receive both a retraction and monetary damages.

Morgan died on August 25, 1688, at age 53, following years of deteriorating health, probably due to alcoholism. He was buried in Port Royal, where his grave was lost to the sea during the massive earthquake that hit the city in 1692.

Did you know that Captain Henry Morgan was a real person and not a marketing invention?

Morgan's is an unusual, almost unbelievable story. He crossed the line into piracy at least twice, and lost several ships during his career — all to accidents, not enemies. Yet each time he found himself being rewarded rather than punished, ultimately even receiving knighthood. He is one of the few of his era to have retired from a life of high seas plundering to one of wealth and comfort, ultimately dying a peaceful death in his own bed.

In 2011, a shipwreck was discovered at the opening to the Chagres river in Panama. The ship is believed to be one of the ships Morgan lost on the reef during his raid on Chagres in 1670. The video provides more details: