Normally whenever I go and see a rare species like a Black-throated Diver. I tend to make just the one trip, providing that I see it of course, but on this occasion I ended up taking two trips. It wasn't intentional by any means, birding can be an unpredictable hobby at the best times, and I'll explain why that was the case this time in due course.

Christmas Eve is a day that for many people is the deep breath before the Christmas frivolities, but for me, it was simply a case of being able to breathe a sigh of relief at the prospect of having completed my working year (I'd booked all of Christmas and New Year). Moreover it was just an opportunity to be able to relax with friends, family including Paula and also to get plenty of birding in. And what better way to kick off the Christmas holidays than by scoring a much needed regional tick.

I'd already seen a Black-throated Diver (Loon) in 2018, way back in February, when a juvenile bird turned up just outside of the West Midlands region at Albert Village Lake in Leicestershire. Interestingly I saw that bird on two separate occasions as well. Must be a thing with me and Black-throated Divers!

I'd spent the morning of the 24th waiting around for the last of my Christmas presents for Paula to arrive. I remember constantly checking the package's progress on the Internet and murmuring silent prayers to whomever was listening to please let it arrive before dusk. Fortunately the birding gods were wide awake, and I almost leapt out of my chair when I clocked the UPS van parked across my driveway. After thanking the courier enthusiastically, I rushed Marley around the block and made preparations for the 30 minute drive down the M42 and A435 towards Redditch, a small town that acted both as an overspill for Birmingham and the home of Arrow Valley Lake.

I was mildly surprised at the lack of traffic given the time. I'd envisaged setting forth into some sort of mad Christmas scrum, but the roads were actually relatively calm. The route to Arrow Valley for me was straight forward, simply drive to the top of my road, enter the A45, drive eastwards for 4 miles before coming to the M42. Once on that, I drove south until I reached Junction 3 and the exit for Redditch and Evesham. From there it was simply a case of following the signs for Redditch and then Arrow Valley.

The Location of Arrow Valley Lake 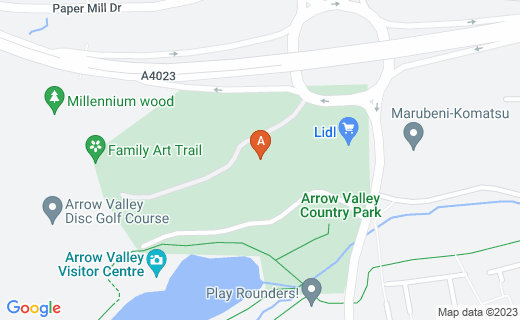 Arrow Valley is not just a Lake its officially known as a Country Park, and is surrounded by patches of woodland and parkland. The area gets its name from the River Arrow, a tributary of the River Avon, that joins its parent waterway at a site called Marriage Hill, situated close to the Warwickshire/Worcestershire boundary.

I parked up close to the shiny and very modern looking visitor centre, that acted as a beehive for the great many families in attendance. I took a moment to refresh my memory of the history of this particular bird before setting forth. The bird had first appeared slightly further North at a site known as Lower Bittell Reservoir on the morning of the 22nd December, there it stayed until just after midday, whereupon it relocated to Arrow Valley, and at the time of writing has remained since. According to the numerous reports on social media, the bird was showing exceptionally well almost directly in front of the visitor centre. With a wry smile, I stepped out of the car and collected my equipment. This was going to be easy!

After crossing a small single track road, I pitched up my scope on a grassy patch literally right next to the visitor centre. I couldn't help but smirk when I heard a child say behind me: "Why has that man got binoculars?" I didn't quite hear what his Mom or Dad said in reply though. Locating the bird was even easier than I thought. I didn't even need to peer through my scope, I simply picked it out with my naked eyes. To the untrained eye it could have been dismissed as another Great Crested Grebe, but even without optics it wasn't difficult to pick out its sleek body shape and dagger like bill.

Black-throated Divers are so named after the distinctive black throat of the adult that contrasts with a metal grey head. Juveniles however, can be a little harder to identify possessing a brown-grey and white plumage. They can be identified conclusively through having a pale grey crown, a thicker neck than the very similar Red-throated Diver and also the distinctive white patch at the rear of its flanks.

With the sunlight vanishing gradually into the Western sky, I attempted to reel off a few photos through phonescopingn, a method that can be problematic at best, but after a few messy attempts, and a fair bit of cursing after the Diver decided to, well, dive for food just as I got everything set up, I managed to get the all important record shot. Once satisfied, I scanned the rest of the pool, and was delighted with the sighting of a female Common Goldeneye bobbing along near to the Black-throated Diver. I promised myself that at some point I would return in a non-twitching capacity. Little did I know that it would be less than 48 hours later.

Christmas Day had come and gone in the blink of eye as it always does, and as usual I spent a portion of the day wondering exactly what all the months of hype was actually for, when the day itself was actually rather quiet and calm. Still, Boxing Day brought with it the promise of a birding trip with Paula. Originally we had intended to venture to one of our favourite haunts, Draycote Water. However, a last minute change of plan resulted in us heading back to Redditch. You see, Draycote prohibits dogs from walking around the reservoir. Instead, they are confined to the small country park adjacent to the entrance road. Prohibiting dogs is inconvenient, but I fully understand it, given the experiences that I’ve had with irresponsible dog owners at other sites, so its a rule that I accept and respect. When Boxing Day itself dawned, Paula asked if it were possible that we could head somewhere dog friendly, and so I quickly scrambled for options. The light bulb moment arrived when I asked her if she fancied seeing a Black-throated Diver? And after explaining what one was, and telling her about Arrow Valley Lake, we were soon off on the road once again.

Whilst Christmas Eve had been a nice bright day, Boxing Day was rather dull on the weather front, but there was nothing dull about our spirits. Paula, in her official capacity as dog handler was eagerly looking forward to seeing somewhere new, whilst yours truly was eager to try out a new and rather surprising Christmas present. For months I’d been saving up for a decent camera, but rather miraculously Santa had decided that I’d been good enough for me to have it the day before, so as well as feeling very grateful, I also felt very excited at being able to take high quality pictures without having to rely on a telescope.

The scene that greeted us upon arrival at Arrow Valley was that of a sea of humanity, a human tidal wave greater than anything I'd seen two days before. Most of the people were armed with a vast array of toys and gadgets, all new Christmas additions and Arrow Valley served as the ideal testing ground. In all honestly I hadn't expected anything different, especially when I allowed my mind to drift back to Christmas' of the past, although I seem to remember more snow being around, now that I think about it. Even so, as an adult man the scene that lay before left both myself and Paula feeling somewhat uneasy, even the two dogs seemed anxious at the noise.

I marched up to the same patch of grass where I'd seen the Black-throated Diver less than 48 hours before, but a scan with the binoculars yielded nothing, apart from common species such as Canada Goose and Mallard. Had it scarpered? No, I’d seen reports from earlier in the day, I thought to myself. Of course, it could have easily departed in the meantime, but instead told myself that it had simply relocated to another part of the Lake. So, after informing Paula of the situation we proceeded to explore the Lake in full.

The Lake itself wasn’t particularly big, but held some pretty decent birds. As we joined the throngs of people meandering along the path I picked out presumably the same female Common Goldeneye I'd seen previously, as well as Gadwall, Northern Shoveler, Little Egret and the resident Grey Heron (every lake has at least one!). The highlights of the walk around though were undoubtedly the unmistakable blue flash of a Common Kingfisher unseen by all apart from me that darted frantically across the Lake towards the River Arrow. Also, the sight of two huge Gulls that appeared overhead and proceeded to circle the Lake a few times before settling down onto the water. These were Great Black-backed Gulls, the largest species of Gull in the world and one that I was familiar with from my frequent trips to the coast, but seeing them inland less than an hour from home, was something special.

By now, the sunlight was fading fast, and still I hadn't managed to locate the Black-throated Diver...but then, after walking another hundred yards or so I saw that familiar sleek shape on the water. There it was, in almost exactly in the same place I'd seen it on Christmas Eve. I'm not quite sure how I'd missed it earlier but no matter, it was there. After confirming the ID with my bins, I handed them over to Paula so that she could get a look. As she admired 'Dylan', as she termed it, I scampered ahead and reeled off a few shots with the camera in the hope that at least one would be half decent.

Having completed the circuit of the Lake, Paula and I parked ourselves on a bench close to the visitor centre and enjoyed a hard earned cup of tea. By now, the sunlight had virtually disappeared, and watching it dissipate was mesmerising. As I did, I reflected on what had been, despite my cynicism towards the commercial side, actually a rather magical Christmas period.