I don't normally experience the blues on a Monday morning, that's one of the joys of having the first day of the week has my allotted day off but on this day, the 10th December 2018 I woke up feeling something similar if not quite the same. You see I'd spent the preceding two days selling Christmas trees- real ones complete with sharp needles and considerable bulk. The trees were heavy enough on their own, but attempting to force a 7 foot high tree through a comparatively small netting machine is no mean feat and literally saps all of your energy. As a result, I awoke relatively late on Monday with the feeling that I could easily sleep for another eight hours. However, this was my first day off for an entire week, so in spite of my fatigued state, I had no intention of wasting it.

So, what to do? Visiting the local patch was the easy option. However, an intriguing report of two Bewick's (Tundra) Swans at Brandon Marsh Nature Reserve turned my head towards a small corner of South Warwickshire. Interestingly, when the initial report was put out back on the 2nd December, I digested the news with nothing more than a raised eyebrow. I've seen them before, I've seen hundreds down at the Slimbridge WWT reserve in Gloucestershire, including more than 100 there earlier in 2018. However, Bewick's Swans are relatively rare in the West Midlands region nowadays. Traditionally, they used large water bodies in the region as necessary pit stops before completing their journey. In recent years though, records of these birds have become rarer, whilst records of their larger cousins, Whooper Swans have increased. So, with that in mind, I could not pass up the opportunity to try and see them.

Where is Brandon Marsh? 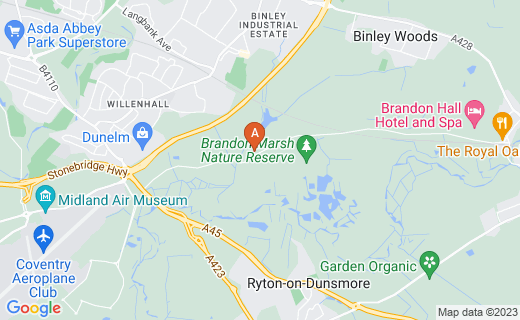 After perusing reports from the previous several days, I was astonished to discover that alongside the Bewick's Swans were four Whooper Swans, a number of Yellow-legged Gulls and a regular Caspian Gull. However, closer inspection of the habits of the Bewick's Swans did make my heart sink a little bit. Apparently the Bewick's Swans were merely using Brandon as a roosting site before departing shortly before sunrise, only to return at dusk. As I wolfed down my porridge, I glanced at my phone, read the time and cursed my body clock for letting me down. It was already half past 8. In fact, I wouldn't arrive at Brandon until after 10 am. My plans hit a slight snag when Marley, my little Jack Russell demanded a walk. I had no choice to oblige and within minutes of me leaving the house it became clear why he was so eager as he shamelessly completed his...business.

The route to Brandon is actually fairly easy from my Birmingham home. Simply a case of driving to the end of my road and joining the A45, known to me and many others as the Coventry Road. Driving in an easterly direction, I crossed the boundary that marks the outer limit of the City of Birmingham, into what is known as the Metropolitan Borough of Solihull, otherwise known simply as Solihull, and past Birmingham International Airport.

There's actually a small stretch of the A45 that passes directly across the landing approach for the Airport, and on many occasions I've been lucky enough to have a plane pass less than a hundred feet above my head. Beyond that lies a stretch of countryside that literally acts as a buffer zone between Britain's second city- Birmingham and its neighbour Coventry, that lies approximately 12 miles to the South East.

Fortunately for me the A45 actually skirts round Coventry City Centre, meaning that traffic was relatively minimal, and after a slight detour to collect Paula we arrived at Brandon Marsh barely half an hour after setting out. Our first wildlife highlight of the day occurred as we were driving along the single track road that leads to the visitor centre. I took a moment to glance around at the countryside and out of the corner of my eye I saw something small and green moving around on the grass verge to my right. It was a European Green Woodpecker, less than 20 feet away from the car feeding happily. I quietly fished my phone out of my pocket in the hope of grabbing a photograph, but the bird flew off just before I could focus it properly.

There were plenty of cars in the car park, but I suspected that they mainly belonged to staff and visitors rather than birders or twitchers. Still, I decided to remain positive- maybe the Swans were still here but they merely hadn't been seen or reported. As we approached the visitor centre I took note of small brown birds flitting around in the trees close to the door and assumed that they were House Sparrows, but a closer look revealed that they were in fact Common Reed Buntings. It always pays to give the so called 'little brown jobs a second glance as you never know what might be lurking.

Brandon, like many prime birding sites started out life as a hive of industrial activity. 167 acres of old colliery subsidence pools and gravel pits with habitats including open water, reedbeds, rough grassland and two small areas of mixed deciduous woodland. Local conservationists initially managed the site before it was acquired by the Warwickshire Wildlife Trust more than 30 years ago, and subsequently transformed it into their headquarters.

We were greeted by two friendly ladies behind the information desk, and the temptation to ask them about the Bewick's Swans was high, but I decided that retaining the mystery was better, so simply smiled and made polite conversation, as Paula took a few moments to browse around the small gift shop.

Out into the reserve itself I took a minute to refamiliarise myself with the layout. After all it had been more than a year since I had last been here, and more than a decade since I was a regular visitor. Those were the days before I was reliant on full time work and when I could devote time to being part of the Warwickshire Wildlife Trust volunteer team.

A closer look at the initial reports of the Bewick's Swans revealed that they had been favouring an area of Brandon Marsh known as the East Marsh Pool, the main body of water at the reserve interspersed with islands and rafts that provide wildfowl with vital safe breeding, loafing and roosting spots. There are 3 hides dotted around the Pool and each one offers superb views. We headed for the East Marsh Hide, as I figured that it would offer the best all round views and thus give me the best chance of locating the Swans. Even so, the lack of birders walking around the reserve meant that my optimism dropped further. Walking into the small dark, and rather musty hide, I noted the only other occupant, an elderly birder who was clearly counting the wildfowl, as every now and then he would whisper numbers followed by the name of the species.

After settling down, I scanned the pool, and as expected the only Swans that I could see were the resident Mute Swans. At this point, two possibilities played out in my mind. Either the Bewick's Swans had departed their roost site earlier in the day as expected to return at dusk; or they had departed completely presumably continuing on their way to Slimbridge to spend the rest of their winter there. There was no sign of the Whooper Swans either. A further scan of the Gulls showed no sign of either the Yellow-legged Gulls or Caspian Gull. With a mental shrug of the shoulders, I deactivated myself from twitch mode into ordinary birding. I settled down quickly to just enjoying the spectacle of watching Great Cormorants spreading their wings wide whilst perched on the rafts. Also present were a fair number of Black-headed Gulls with a couple of the much larger Lesser Black-backed Gulls standing close by, almost as if they were standing guard, remaining watchful over any trouble in the ranks. Although, the reality was like their smaller cousins they were more likely just loafing about. Also, among the Gull menagerie were 7 Common Gulls, although, despite the name they are in fact relatively scarce. In the summer they are almost absent entirely, but they can be found in relatively considerable numbers on large water bodies during the winter.

On the wildfowl front, things were as expected with good numbers of both Eurasian Teal, Gadwall and Northern Shoveler present. I was a little surprised by the absence of Eurasian Wigeon, but the presence of a striking male Goosander (Common Merganser) and a dainty female Common Goldeneye and a brief fly past from a Common Kingfisher proved to be the main highlights in the absence of winter Swans and rare Eastern Gulls.

After a fair while in the East Marsh Hide, by which time my attempts to photograph the female Goldeneye had ended in frustration, due to her repeated habit of diving for food, just as I'd got my phone and scope set up. I decided to have a look at the Brandon Birding website, just to see if there had been any sightings of the Swans. What I read on the sightings page almost made my jaw drop to the floor. Apparently not just one, but 3 Eurasian Otters had been spotted at somewhere known as the Grebe Pool. The name didn't mean much to me, but a quick glance of the laminated map in the Hide revealed that we had in actual fact walked past it without casting as much as a sideways glance.

In no time at all, we had packed up our gear and were briskly walking back in the direction we had come from. In anticipation of glimpsing our first ever wild Otter, Paula had come up with the affectionate name of Ollie. I did suggest Tarka, but Ollie won after a vote was cast. The vote itself was tied but Paula won by default.

The Grebe Pool itself was a fair bit smaller than the East Marsh with views partially obscured by waterside vegetation and trees. I could immediately see why an Otter or 3 would be very happy here with plenty of cover and small islands for them to rest on. At every possible opportunity I scanned the water with both scope and binoculars in the hope of seeing a glossy brown furry head emerge from the depths. But no matter how hard I looked no Otters were forthcoming and my attempts to turn a Common Moorhen into an aquatic mammal met with failure.

Oddly enough, I did not feel disappointed with any of my failings target wise. I had already told myself that seeing the Bewick's Swans was unlikely given my late arrival. Moreover, Otters are notoriously elusive at the best of times, so whomever the lucky chap was that saw them probably only got a brief glance. We left Brandon Marsh a little after lunchtime feeling satisfied at starting our day with a daily dose of vitamin mother nature