There are very few certainties in this life, but one of those is that I do not work on a Monday. I never have and hopefully never will. A typical Monday usually involves exploring my local patch in the morning, before taking a trip slightly further afield with Paula in the afternoon. However, on this particular Monday things were different. I'd spent virtually all of the previous weekend with Paula, meaning that we could indulge in a true rare treat- a full day out. I'd told Paula a great deal about the Chase, especially after my trip there back in November 2018 to see a long staying Great Grey Shrike. Unfortunately Paula wasn't able to accompany me on that day, and we had hoped to catch up with the bird in the New Year. However, sightings of the bird had become less frequent, and at the time of writing has not been reported since the 12th February 2019. Still, Paula was eager to see the Chase regardless, and so after dropping my car off for its annual MOT, we (Paula, myself and the two dogs) made the 30 mile trip up into Staffordshire from the West Midlands.

The route is a fairly well trodden one for me as I've made the journey either alone or with Paula 5 times in the last 4 months. The intention was to at least show Paula where the Great Grey Shrike, although a small part of me hoped that we would get lucky. We parked up in the secluded Seven Springs Car Park, and clambered out of the car to more unseasonable February warmth. It felt like a summer's day, with a bright blue cloudless skies and the sun's rays casting its warm glow down upon us. Surrounding us was a mixed deciduous forest, full of old gnarled trees such as Oak and Beech. It looked at first glance very similar to one of my local patches, Moseley Bog in terms of character, but Cannock Chase is on a different scale altogether. Whilst Moseley Bog is no bigger than a postage stamp, the Chase is 26 square miles of forest and heathland, complete with roaming herds of wild Deer. Its vastness allows you to enjoy its wild riches without seeing another living soul; a very rare treat in an increasingly overcrowded world.

Where is Cannock Chase? 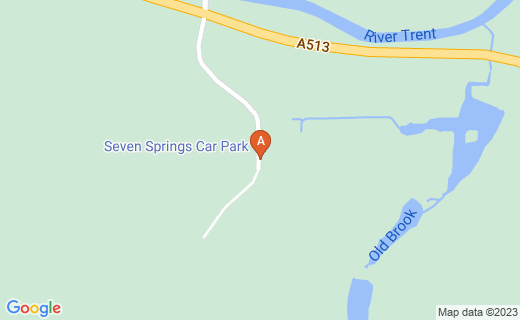 From the car park we followed the left hand trail, just as I had done back in November. I wanted to show Paula the exact spot where the bird just so she could get a flavour of the kind of environment that 'Graham' the name she'd given the bird had inhabited. To our left down a steep embankment lay the Old Brook that glistened brightly in the morning sunshine. Gradually, the old natural deciduous forest made way for the conifer plantations that covered huge areas of the Chase. The bird life too also changed slightly in character- the usual cacophony of sound from birds such as European Robin, Dunnock and Song Thrush was joined by several high pitched whistling calls 'tilu' tilu'. These belonged to Eurasian Siskins, a small species of finch that are commonly found in coniferous forests right across Europe. I caught sight of one of the diffusely streaked females foraging in an Alder tree. I wanted to try and show Paula one of the beautiful yellowy-green males with their black crowns and bib, but only got fleeting glimpses as they foraged relentlessly through the canopy. I also caught glimpses of tiny Goldcrests and Coal Tits, as they moved nimbly along the tiniest of branches.

After about a quarter of mile, I came across a familiar sight. To my right lay a clearing in the forest, and to my left another trail that offered a winding route up to the top of Strawberry Hill. I glanced at the clearing, and instantly I was transported back to November 2018. There were hordes of people there that day, all with either camera lenses or telescopes. Today it was deserted apart from us and after my mind returned to the present, I noticed that the clearing had been ploughed, removing a lot of the low growing foliage that I'd seen last time. The dead trees that the Shrike had favoured were still there, but everywhere else was bare. My mind then reminded me of a report that I'd read in January that the Forestry Commission (the organisation that own the Chase) had ploughed the area in preparation for the planting of more conifers.

After taking a moment to scan the clearing with my binoculars, I led Paula up Strawberry Hill. Unsurprisingly there was no sign of the bird, but I did hear the familiar call of a Common Kestrel, a bird that had delighted the crowds back in November; but on this occasion I merely had to be content with hearing its call.

The last time I'd walked up this trail, I'd been excited, if not a little flustered. I remember almost sprinting up the hill, easily outpacing my older peers. This time though, we took things at a more lesiurely pace- there was no need to rush. Moreover, the temperature was rising. I'd already dispensed with my coat and now Paula had removed her body warmer as we continued our way up. To our left I caught sight of six dead Scots Pine trees poking their lifeless forms through the thick undergrowth. This was where the Great Grey Shrike had relocated after is usual haunt had become besieged by photographers. Another quick scan failed to pick up the bird but I did get excellent views of a very regal looking Common Buzzard perched on top of one of the branches. With the clear blue sky acting as the perfect backdrop I couldn't resist taking a couple of photos. I then took the opportunity to reel off a few more photographs of the view we had from the top of the hill.

After searching for the Great Grey Shrike we then followed the trail down the other side of the hill to what I hoped would be a way back to the main trail so that we could complete a loop. We were soon back within the cover of the vast conifer plantation. My brain kept me telling that this forest shouldn't be- I should be admiring Oaks rather than conifers. But still, as we rounded a bend, we came across a fairly open area of forest where the sunlight now filtered through the towering trunks. Such a sight is enough to move anyone to at least admire it, so out came the camera for another photo. My attention would soon be diverted to the calls of birds high in the trees. These were more Eurasian Siskins, but among them were a small flock of Lesser Redpolls. I scanned the flock meticulously in the hope of spotting a pale Mealy (Common) Redpoll but after a thorough inspection I was satisfied that they were all Lessers. I also heard the distant, rather loud, metallic call of Common Crossbills 'glipp-glipp-glipp'. These were undoubtedly my target bird of the day, as I'd yet to see this one this year. Although, despite eagerly adding the bird to my year list, I was equally eager to obtain a photograph. However, a scan with the binoculars in the direction of the call only managed to pick up a flock og 6 birds passing through.

We walked for another ten minutes before veering off down another trail that led back to the original trail, which in turn would lead us back to the car park. We ambled our way back, as Paula took the opportunity to enjoy a new place, and I took the opportunity to revel in the springtime orchestra that was constantly playing. Then, looking to my right I caught sight of a large finch-like bird in a lonely conifer tree. Straight away my brain ruled out European Greenfinch, so a quick check with the binoculars revealed it to be a female Common Crossbill- a grey green bird with a yellowish rump. Males are far more distinctive with their brick-red head and underparts. The bird was happily foraging alone, I couldn't quite make out what her extraordinary bill was trying to get at, but even so out came the camera once again and quickly reeled off a few shots. Now, I had that same feeling that I'd had many times in the past whenever I'd spotted a rare bird for the first time- a mixture of happiness, relief and contentment. I'd wanted to get a photo of a Common Crossbill for some time, so was delighted to finally have one.

We completed our journey back to the car and left the Chase excited about the next visit. Paula was eager to come back, but equally also eager to see a Great Grey Shrike, so that's my next mission. At the time of the writing, a bird has taken up temporary residence at Clumber Park, Nottinghamshire, so hopefully it'll stick around