Yesterday afternoon (Sunday 06/01/2019), as I settled down to my lunch at work, my phone beeped with an intriguing report from a small corner of Staffordshire just a few miles north of Rugeley. A probable Lesser Scaup had been sighted at Blithfield Reservoir, a place I'd heard and read much about, but had never actually visited. Prior to that report coming through, I had idly toyed with a few options for how to spend my long awaited Monday day off. A morning walk around my local patch is always the easy option, but an equally intriguing report of a Dark-bellied Brent (Brant) Goose at Upper Bittell Reservoir had me mentally making preparations for a trip to Worcestershire. However, the possibility of seeing my first ever Lesser Scaup in Staffordshire was simply too tempting to resist.

The identity of the bird had of course yet to be confirmed for definite. But after looking at video footage and images online, the bird looked a good candidate for a 1st-winter female. Further discussion on Twitter also revealed that the bird may have been the same individual that had been sighted on Anglesey last year. It came as no surprise to me at least when the Bird News service amended their earlier report and confirmed that the bird was indeed a Lesser Scaup. My mind was clear, and I knew exactly where I would be on Monday morning. For the rest of Sunday, I casually daydreamed about taking a photograph and filling a very important gap in my list.

Lesser Scaup is a species of diving duck that is very common in North America, breeding widely there. Upon first glance it resembles its close relative, Greater Scaup but is much smaller, smaller even than another relative, Tufted Duck, which are common in Europe. The easiest way to identify them is by noting the peak at the rear of its crown and the greyish vermiculation on its back. However, the peak can cause problems when trying to separate them from Tufted Ducks as it can resemble the distinctive tuft at first glance. Another diagnostic feature to look out for are the wing bars; with only the inner wing possessing a white wing bar with Lesser Scaup, as opposed to the all white wing bar typically found in both Tufted Duck and Greater Scaup.

Whilst Greater Scaup are not particularly common in the UK, records are fairly regular, especially in winter. Moreover, there have been records of a few pairs nesting in northern and western Britain. Lesser Scaup however, are much rarer on this side of the pond, with only 5-15 sightings recorded annually. In fact, up until 1987 Lesser Scaup was unheard of in the Western Palearctic (Europe, North Africa and the Middle East), but all of that changed when a 1st-winter male was founded at Chasewater, a large reservoir and country park in Staffordshire. Ironically, Chasewater is only a few miles south west of Blithfield, so I hoped that fate would be kind to me. It would be lovely to record my first Staffordshire Lesser Scaup just a few miles away from the first ever one to grace the UK.

The Location of Blithfield Reservoir 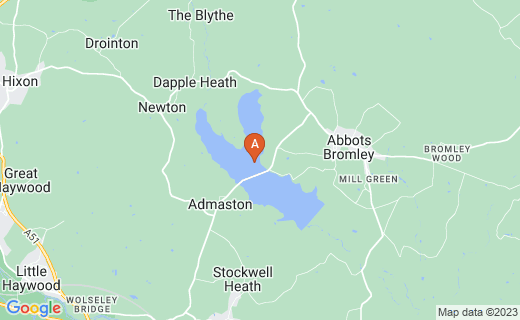 Monday morning (07/01/18) arrived and after completing a couple of errands first thing, I wasted no further time, jumped in the car and made the 30 mile trip north to Blithfield Reservoir. However, I set off feeling just a tad guilty. You see, normally on a Monday morning, myself and my dog Marley will head out to my local patch for a look around. However, as Blithfield is a private reserve, I correctly assumed that dogs were prohibited so had to leave him behind, promising that I wouldn’t be too long. Inevitably that lead to whining and barking, which I could hear from inside the car, and the sight of his face staring at me from the bedroom window made me seriously reconsider my choice. But the lure of a rare North American diving duck was far too much to resist, so off I went silently vowing to be back as soon as possible.

I’d never been to Blithfield before and was pleasantly surprised when I arrived. It was vast, in fact its the largest water body in the region and is surrounded by lovely Staffordshire countryside. The reservoir is divided into two by a causeway that doubles up as the B5013 which runs between Rugeley and Uttoxter. Blithfield reminded me a little bit of Pitsford Reservoir in Northamptonshire. Likewise, that’s split into two by a causeway/road, with one side being private, and the other being open to the public. At Blithfield though, the whole 790 acres was open only to those who held a permit, as it's under the ownership of South Staffordshire Water.

Blithfield is served by two small car parks at either end of the causeway, and as I pulled into the southern car park, I was a little surprised at just how quiet things were. There were only a couple of other cars present, and indeed the only other birders I saw were presumably regulars who passed through the locked gate and proceeded to walk around the northern end of the reservoir. Did they know something I didn’t know?

Undeterred, I set up my scope and scanned the water close to the southern end of the causeway, the approximate location of the report I’d read the day before, and quickly located a flock of Tufted Ducks. The photos I’d seen had shown the Lesser Scaup to be associating closely with Tufted Ducks, so naturally I assumed that’s where it would be. However, an initial scan of the flock drew up a negative as all of the birds were indeed Tufted Ducks, a mixture of black and white males and brown females, but I wasn’t ready to give up just yet.

I walked briskly along the causeway stopping periodically to check the flock that I had first scanned from the car park but still no joy. Then, I spied another, larger flock nearer to the eastern end of the causeway, so moved quickly towards them, and carefully scrutinised each of the female birds, but each one had the brown back and distinctive tuft characteristic of Tufted Ducks. I scanned both flocks again just to put my mind at rest, before crossing the road to check the northern section of the reservoir, just in case the Lesser Scaup had happened to relocate overnight.

Once again, I quickly located a Tufted Duck flock that might house my potential target, but scan after scan proved fruitless. I was beginning to think that the birding gods had decided my fate the very moment I had made the choice to leave Marley at home. Either my ID skills weren’t good enough or the bird had simply departed. I mentally reeled off the important ID features and checked each Tufted Duck flock over and over, but once again no success. Then, my phone buzzed, which seemed to bring me out of a trance, and quickly digested the news that appeared on my screen: ’Lesser Scaup (-ve), Blithfield Reservoir, Stafforshire. The (-ve) stands for negative. The revelation actually made me feel relieved, the bird had departed after all. But who exactly had put the news out I thought. I hadn’t seen anybody else, then again knowing how intensely focused I was on locating the Lesser Scaup, the other birder/birders could have walked straight past me without me being aware.

The Kingfisher and the Canal

Whilst walking back to the car, I took the time to note some of the other birds present at Blithfield. Both Canada and Greylag Geese flew over my head and the water held good numbers of Mallard, Great Cormorant, Northern Shoveler, Eurasian Teal, Common Pochard and Common Goldeneye. A Common Buzzard drifted lazily above my head, and the sight of Meadow Pipits and Common Linnets feeding together on the shoreline brought a smile to my face.

After journey home to a very happy and excitable Jack Russell, I was out again less than two hours later, this time with Marley, Paula and her Jack Russell Eddie. No twitching or chasing this time, instead a leisurely walk along the Grand Union Canal from the Kingswood Junction located near the village of Lapworth in Warwickshire. In spite of it not being a birding trip as such, I did take my binoculars and camera just in case, as I always do. And on this particular occasion its a good job that I did, as I caught a glimpse of a familiar flash of halcyon blue whizz past our position, about a quarter of a mile down the canal from our starting point. Normally when I see a Common Kingfisher, that’s the typical view I get, just a quick flash, but this bird decided to settle on a branch a mere fifty yards away from us, so without further ado I whipped out the camera and attempted to take a photo of the Kingfisher. However, bizarrely my camera struggled to bring the small bird into focus properly so ended up with a slightly blurry shot, before he flew off never to be seen again.

All in all it was a day of two halves, it started out with the promise of a rarity which came to nought, but ended with two beauties, with firstly the Kingfisher, closely followed by a beautiful male Eurasian Bullfinch on our way back to the car. The ups and downs of birding never cease to amaze me.