CS is a devoted birder who is always chasing that next lifer to some amazing places all over the globe.

The series of islands that lie off the Caribbean coast of Venezuela are home to a surprising diversity of birds, in addition to incredible beaches. Protected from hurricanes, these islands receive relatively little rainfall, and consequently are typically arid with desert scrub vegetation.

Their true riches come from the surrounding seas, where nutrient input from the nearby mainland and ocean currents create an abundant marine ecosystem. This in turn supports huge numbers of seabirds, many of which nest in the rocky cliffs, sandy beaches, and mangrove lagoons in the area. While there are no true endemic bird species to these islands, Isla Margarita in particular has many species found on the Venezuelan mainland, and several rare species that are more readily found on Margarita than on the mainland.

A combination of paradisaical scenery, relaxed vibe, great birding, and lower security concerns than mainland Venezuela make these islands a great place to spend a week or two for birding and relaxing in the Caribbean sun. 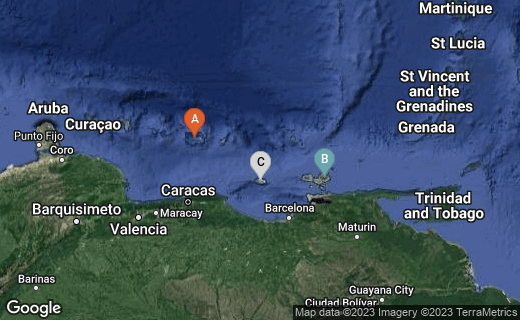 The Los Roques Archipelago bathes in the Caribbean just a short 30 minute flight from Caracas, but is a world apart from the hustle, dangers, and noises of the city. Made up of roughly 350 islands, cays, and islets, the entire archipelago is a Venezuelan national park. The only major town is El Gran Roque, a sleepy scattering of buildings crisscrossed by sandy foot trails. Only a couple of vehicles exist in the town, the most commonly used of which is the garbage truck.

The beaches themselves are among the most incredibly beautiful in the entire world. This makes Los Roques a great choice for birders with a non-birding spouse or family. It is pretty easy to sell the idea of lounging in a secluded tropical beach while you go birding, or to lounge on the beach yourself, picking up the binoculars when the mood suits you.

Rich waters surround the islands support huge schools of sardines, an endless feast that hosts a huge numbers of seabirds. By far the most common birds on the islands are Brown Pelican and Laughing Gull, and there are very few places in Los Roques where this duo cannot be seen plying the waters for fish. Also common over the open waters and sandy cays are Black and Brown Noddy, Magnificent Frigatebird, Bridled Tern, Brown Booby, and Royal, Roseate, Cayenne, Sandwich, Least, and Roseate Terns.

There are a great deal of mangrove-covered islets which many seabirds find ideal for roosting and nesting. During breeding season, one can be treated to huge congregations of Red-footed Booby, Magnificent Frigatebird, Brown and Black Noddy, Brown Pelicans, Great Egrets, and the many tern species. The mangroves also hold unique subspecies of Yellow Warbler ("Golden Warbler") and Bananaquit (an all-black version). During the spring and fall migrations, the mangroves can be a great spot to check for many migrant warblers, flycatchers, and vireos on their way to North America.

On Gran Roque itself, the rocky headlands that give the archipelago its name are important breeding and roosting areas for a lot of seabirds, and careful examination of the rocky faces can yield some surprises. Look for Sooty and Bridled Tern, Brown Booby, Masked Booby (rare), Red-billed Tropicbird, and Neotropic Cormorant roosting on the many rocky pockets and outcroppings.

While the overall bird diversity (92 recorded species) and lack of endemics certainly pales in comparison to the nearby mainland, the unforgettable scenery of Los Roques makes this a top destination for beach goers and wildlife-lovers alike.

While Isla La Tortuga is the second-largest of Venezuela's Caribbean islands, it receives relatively little press and attention from the masses. Part of this is the lack of facilities (there are no permanent residents), part is the lack of fresh water sources on the island, and part is the mistaken belief that the island can only be reached by chartering a private plane of yacht.

The truth is that a number of tour companies regularly take clients to La Tortuga, and those that visit are treated to a truly unspoilt virgin paradise. White sand beaches reminiscent of Los Roques are the rule here, and the island's namesake turtles thrive and breed by the thousands in the shallow, clear water and warm, soft sand around the island.

Birds that frequent the islands tend to be migrant shorebirds on their way to and from the mainland, gulls, herons, and terns that fish the waters nearby, and of course the ubiquitous Brown Pelican. Some species nest here, such as Wilson's Plover and Least Tern, but many more are simply passing through. While not the most diverse and species-rich Venezuelan island, it certainly warrants a visit to see its turquoise waters and white sandy beaches firsthand.

I had originally planned to include Isla Margarita in this article, but found that there was simply too much to say about Margarita to cram it into a smaller section. Margarita is the clear winner in terms of birding in the Venezuelan Caribbean, for extensive details on the area, please follow the link below to Birding in Isla Margarita.