If you do not see Phyllis on HubPages she is off wandering the pages of history looking for a notable person or event to write about.

Dunbar Castle once was a mighty fortress on the southeast coast of Scotland, in East Lothian. It is from here that Black Agnes defended her home and country in 1338. Agnes Randolph, Countess of Dunbar, was the daughter of Thomas Randolph, 1st Earl of Moray and Isabel Stewart, a cousin of the High Steward of Scotland. Agnes was married to Patrick, 9th Earl of Dunbar and March.

Lady Agnes Randolph, also known as Black Agnes because of her olive skin and raven hair, is admirably remembered as a Celtic woman warrior and a folk hero.

Agnes was born around 1312 and died in 1369. Her father, Thomas, was Regent of Scotland and one of the signers of the Declaration of Arbroath, a declaration of Scottish independence. The letter was submitted to Pope John XXII, dated April 6,1320. The intention was to confirm Scotland's status as an independent, sovereign state and their right to use military action when unjustly attacked.

...for, as long as but a hundred of us remain alive, never will we on any conditions be brought under English rule. It is in truth not for glory, nor riches, nor honours that we are fighting, but for freedom -- for that alone, which no honest man gives up but with life itself.

This statement seems to have been foremost in the heart of Black Agnes as she stood strong and courageous against the attempt to seize her castle by English forces.

Dunbar Castle is in a chain of mighty fortresses which protected the borders of Scotland in the southeast. These fortresses had powerful control over any entry to Scotland from the south.

The whole area is rich in history, with a long line of monarchs from the year 547 to 634, when it united with Deira to form the Northumbria kingdom.

Dunbar Castle once sheltered Mary, Queen of Scots and Lord Darnley, her husband, during their hasty retreat after the assassination of Rizzio, Mary's private secretary. Lord Darnley had stabbed Rizzio over 50 times in March of 1566.

After all the battles during centuries of standing strong, facing the fierce winds and brutal storms from the sea, Dunbar Castle gradually fell to ruins -- the final blow was when the solid rock was blasted through to make an entrance to what became Victoria Harbor in 1844.

Dunbar Castle ruins and the entrance to Victoria Harbor ~

The coast of East Lothian is studded with castles, a chain of mighty fortresses which protected the borders of Scotland in the southeast. ~ 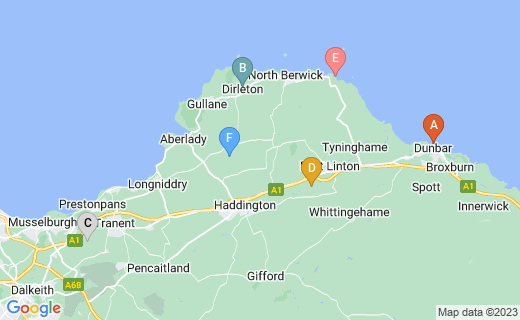 Founded as a fortified tower house sometime before 1300.

Tantallon is a 14th century fortress.

An Iron Age fortified village with a system of ramparts and ditches around a settlement.

At the time of the siege of Dunbar Castle, Patrick was away fighting another battle. This was all during the conflict which stemmed from Edward de Baliol (c. 1283–1367) who was a claimant to the Scottish throne. With the help of English forces, de Baliol attempted to seize the Scottish Crown.

Left in charge of Dunbar Castle, Agnes was not about to give it up. Standing on the high walls of her castle she rebuked and angrily scolded Montagu and his forces. It is said that after the walls were bombarded with stones, that Agnes had her maids, dressed in fine clothes, walk the walls and dust the rubble off with their white handkerchiefs as a slight to Montagu and his attempts.

When Montagu ordered a battering ram to the gates of the castle, Agnes had the stones which Montagu's army had hurled at them, dropped over the wall. The battering ram was destroyed by the stones.

Medieval Queen and her maidens ~

With wit and dignity, Lady Randolph defeated William Montagu, 1st Earl of Salisbury, when he laid siege to Dunbar Castle in 1338 -- frustrated about a woman who was determined to keep her house, Montagu admitted defeat and left.

And keep her house she did --Montagu found out that Black Agnes was not one to mess with.

Of Scotland's King I haud my house, I pay him meat and fee, And I will keep my gude auld house, while my house will keep me.

Agnes would not be moved ~

There is one story that a threat by Montagu to hang their captive John Randolph, Earl of Moray (Agnes' brother), there in front of her castle, failed when Agnes called his bluff -- she supposedly yelled back and told Montagu to go ahead, for that would make her the Earl.

Seeing this did not phase Agnes, Montagu did not order the hanging.

Lore of the land often stems from factual history. There is no exception when it comes to Black Agnes. Born a lady of royal heritage, she has become in legend a fierce Celtic woman warrior who saved, not just her own home, but the formidble fortress which protected the southeast border of Scotland.

With only a handful of men at arms and her maids, Agnes faced her foe against all odds and won. After five months of attack and trying to starve out those at Dunbar Castle, Montagu called retreat and left the Lady in possession of her home.

In a ballad supposedly sung by the defeated soldiers on their way back to England, these words were attributed to Montagu:

She makes a stir in tower and trench,

Came I early, came I late.

I found Agnes at the gate.