Changes In Bird Populations and Habitats

The Great American Backyard Bird Count is an event that causes me to remember that I have not seen a Blue Jay in several years, although the bird is historically a resident of Ohio.

Ohio bird watchers report seeing Blue Jays in our large metro parks that include sizable forests within our city and county limits. This year, for the February bird count sponsored by the Audubon Society, participants will likely become excited by any of these jays seen on their own properties.

A bird watcher is defined as a person that travels at least a mile away from home to view birds but this requirement in not necessary for the backyard bird count. Pull out some binoculars and a camera and collect photos of as many different birds as possible. You might want to send some of them as entries into the photo contest connected with the bird counting event.

Personality Of the Jay

In elementary school I learned that Blue Jays are loud-mouths and very rude bullies. Having never seen one, I had no frame of reference. Cardinals I knew; Jays, I did not.

In To Kill a Mockingbird, attorney Attitcus Finch tells his son Jem:

Shoot all the blue jays you want, if you can hit 'em, but remember it's a sin to kill a mockingbird.

So why would it be acceptable to kill the jay? They must to much more than sing and what they do must make people angry - unless their songs are just loud and ugly and disrupt life.

Certain old superstitions hold that this bird is a servant of the devil. Some of the first naturalists' drawings of the bird in the 1750s featured an emphasis on the strong black beak, open in a squawking attitude. Overall, the Blue Jay did not seem very friendly to its discoverers.

The bird is territorial, aggressive, and imitates the calls of larger predatory birds to scare off competition for food and potential invaders of its nests. It can be very loud, although I have never heard one make so much as a small peep. As a child, I thought the species was a mute blue cardinal.

Stellar Jays have almost identical characteristics. There appear to be no visual recordings of the hybrid of the two species, so we do not yet know whether the hybrid is more or less aggressive than the parent species. In the case of the polar bear-grizzley bear hybrid, the offspring has been so aggressive in encounters with humans that local government policies are to shoot any of these hybrids on sight.

The Stellar Jay looks much like the other species in its genus, with the blue and white scrubbed off. I wonder if one is not a subspecies of the other.

In the 2010s, the Blue Jay has been counted in the northern states of America and at the Pacific Northwest Coast in southern Canada a British Columbia. The *green* area on the map above now extends at least one state to the west along its western boundary and over the Rocky Mountains which previously stopped further migration. A need for additional food and mates may have caused this change.

The bird is may have expanded its territory to Colorado as well, since scientists feel that they have see hybrids of the Blue Jay and Stellar's Jay in that state. Another possibility is that the Blue Jay mates with Stellar's in Idaho, Montana, and Wyoming, and the young hybrids evenutally migrate into Colorado.

This bird previously gave way territorially to Stellar's Jay in the Western US, but naturalists and ornithologists believe that the two species are now cross-breeding to from a hybrid bird. They are the only two species in the genus Cyanocitta.

Both species can imitate other bird calls and both can mimic the call of the Red-shouldered Hawk (so can the Northern Mockingbird). Both jay species eat plant and animal materials and they are both highly attracted to unshelled peanuts.

Northern Mockingbirds can mimic the call of many jays. They live and breed from about Lattitude 42° North in the USA all the way southward through Mexico and most of Central America. Some have been seen outside these boundaries.

Mockingbirds can imitate human, animal, and inanimate-object sounds with ease. They can sound like another bird species, a cat, a gathering of chittering insects, a washing machine, or a car alarm.

The North American species of Mockingbird is the Mimus polyglottos, whose Latin name means many-tongued mimic. In fact, any one of these birds can learn 200 songs and a variety of noises. To date, no one has formalized a concrete migratory pattern for the Blue Jay. They seem to go where they want, when they need to do so.

As of this writing, no one has reported evidence of a Blue Jay - Mockingbird hybrid that is the Mockingjay in the Hunger Games books and films. It is an eerie coincidence that Blue-Stellar Jay hybrids were discovered about the time that the first Hunger Games film was released. Audubon maps and others revealed Blue Jays habitats touching Stellar Jay areas (USGS Map, Pautuxent Wildlife Research Center; National Geographic; Audubon; all as early as 2011).

The idea for the Mockingjay is a food one for the fictional accounts, my opinion based on the Blue-Stellar hybrid.

What Is a Mockingjay?

The Mockingjay is not only a good dea for a storyline, but it is also a believable concept.

This bird resulted from a failed government experiment. The Panem Capitol chiefs bred jabberjays to spy on citizens in the districts. The birds were stool pigeons - they memorized and repeated whole verbal transactions.

As the citizen rebels caught on this, they sent back false information via the birds, which were then abandoned by the government. Next, male jabberjays mated with female mockingbirds and hatched Mockingjays. The latter mimicked both bird calls and human voices and were uncontroallble by the government. This is eerie, since some US residents feel that the government is spying on the population via cameras, email, and other means.

The strip of US States to the west on the map below touch the states in the triangle of letters to the east, and Blue Jays now cross the Rockies.

The Northern Mockingbird is most often seen in the southern US States, so hybridizing these birds into a Mockingjay may a long shot, because of usual geographic distance between species and the various genetic obstacles that might be operating.

Jays Meeting In the Lower 48 States 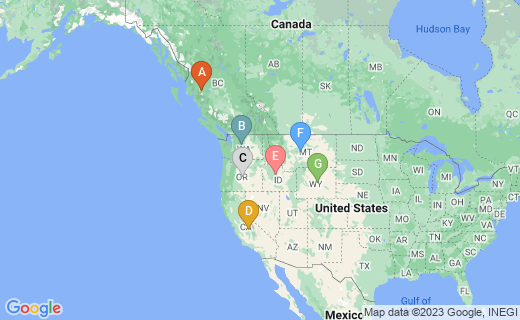 As you count birds for the Great Backyard Bird Count and any time you watch for birds, take notice of any Blue and Stellar Jays and Northern Mockingbirds (we have 17 different species of mockingbirds altogether).

Take pictures if you can, enter the photo contest, and if you ever think you really see an actual Mockingjay, be sure to take pictures and document the bird. Then notify the local branch of the Audubon Society.