The Borden Murders: If Lizzie Didn't Do It, Who Did?

Katharine has been fascinated by the Borden case since adolescence and resides not far from the scene of the crime.

Much has been written about the infamous murders that occurred in Fall River, Massachusetts back in 1892. Transcripts of the inquest and trial have been poured over by true crime enthusiasts and historians. Most seem to believe that Lizzie, who was accused and ultimately acquitted, got away with murder. But did she? Consider the possibilities and come to your own conclusion.

The Facts of the Case

Thirty-two year old Lizzie Andrew Borden lived with her elder sister Emma, her father Andrew Borden, and her step-mother Abbey Durfee Borden in a modest home in the city of Fall River, Massachusetts. Her own mother had died when Lizzie was a small child, and her father had remarried a few years later. Lizzie was not fond of her step-mother, but by all accounts she was devoted to her father. She, in turn, was her father's favorite.

Andrew Borden was not well liked in the community. Though he had been very successful, first as a furniture and casket salesman, and later through developing and running textile mills, he had made many enemies due to his gruff and parsimonious nature and his reputation for being very tight with money. He was not a man with many friends, and he was just as happy without them. He was 70 years old at the time of the murders.

Abbey Borden was a rather plain woman who was thankful to have made a good marriage much later in life (age 36) than a woman usually married for the first time. She was short, rotund and fairly shy. She was close to a younger half sister, whom she had raised, but not particularly close to her two step-daughters. In fact, Lizzie had stopped calling her "mother" some years earlier, and instead called her "Mrs. Borden".

On the morning of 4 August 1892 sister Emma was away visiting friends, so Mr. and Mrs. Borden began their day at 93 Second Street with Lizzie and their Irish house maid, Bridget Sullivan. Mr. Borden went out for a short time on errands and returned to the house at 10:45 am. Mrs. Borden had gone upstairs after breakfast to change the linens in the guest room, where Mr. Borden's brother-in-law from his first marriage, had stayed over the previous night. Bridget went up to her attic room to lie down, after having washed the lower floor windows, as the day was humid and stifling hot. Where Lizzie was is unclear, but she testified that she had gone out to the barn to eat some pears.

AT 11:10 am, Bridget heard Lizzie call up the stairs to her. "Come down quickly! Father is dead! Someone came in and killed him!" She found LIzzie standing by the back door, and she was sent out to raise the alarm and summon help. A family friend came over right away and saw the body of Mr. Borden in the parlor. He was lying on the sofa, and his head was a bloody mess. Wondering where Mrs. Borden might be, the friend and Bridget headed up the stairs. From halfway up the stairs, they were able to see that Mrs. Borden was lying on the floor of the guest room in a puddle of blood. She too had been hacked to death with a hatchet.

Soon the premises were swarming with police and Lizzie was being administered a sedative by the family doctor. In the days that followed, Lizzie was questioned several times and her answers seemed to vary and not make sense. Suspicion fell on her, and an inquest was held. Still her answers as to where she was and what she had done on the day of the murders was murky and inconsistent, and on August 11th she was arrested and accused of the murders of her father and step-mother.

The trial was held the following June, and it was every bit as much followed by the public as the OJ Simpson trial would be, more than a hundred years later. People scoured the papers as the fascinating details of the murders, the inquest and the indictment were sensationalized by the press. By the time the trial began, the public had been whipped into a fury, and everyone had an opinion. Mobs formed outside of the courthouse each day of the trial, eager to catch any hints as to what was occurring inside. Finally, on 20 June 1893, Lizzie Borden was acquitted of the double murder.

Theories of the Borden Murders

Theories abounded during the trial, and the acquittal did nothing to stop the speculation. No one else was ever accused of the crimes, and the case was never solved, which leaves historians and crime solvers with an enduring mystery. Did the 32 year old spinster brutally kill her father and step-mother with a hatchet? If so, why? And if not, then who could have committed such a hideous crime? What was the motive?

Predictably, there have been dozens of scenarios that have been suggested over the ensuing century. Some are plausible, others wild, but none has ever been able to put the questions surrounding the case to rest.

Those who think Lizzie must have done it have put forth various theories as to why and how the crime was committed. Mrs. Borden was killed first. Why would Lizzie have killed her and then her father? Below are some of the theories:

Here are some of the theories that have gained followers over the years:

The first one, the "wild-eyed man" that was reportedly observed, may well be a hint toward the truth, and, if so, the fourth one would be the "real" story.

What about the other three theories?

1) There is no evidence whatsoever that Lizzie was having a lesbian affair with the maid. Even if it were true, while Lizzie disliked her stepmother, she adored her father and it is unlikely that she would perpetrate such brutality on him just to conceal a secret, no matter how shocking.

2) Bridget Sullivan, the Borden's maid, is reported to have had a reasonably cordial relationship with the family members. She was not treated with any more disregard than other Irish maids of the day, and she was employed of her own free will. It seems that Bridget could have quit rather than hack her employers to death. She did, in fact, leave the employ of the Borden sisters shortly after the murders.

3) There is likewise zero evidence that Lizzie and Emma were ever abused by their father. On the contrary, Lizzie was his "favorite" and he tended to spoil her, often giving in to her somewhat unreasonable whims. Emma, on the other hand, was known to be a reserved and private person who would go visit friends to escape the volatility of the Borden household. It is unlikely that such a person would collude with her sister to murder their parents in cold blood, not to mention that Emma had an iron-clad alibi.

Who Really Killed the Bordens?

Another theory, not mentioned in the video, was that Uncle John Morse, the in-law of Mr. Borden who had spent the night prior to the murders at the Borden home, was the killer. However, no realistic motive has ever been conjectured for Mr. Morse, and there was considerable evidence given that he had been far from the home doing errands at the time the murders occurred.

Who, then, could have committed this horrendous crime? Who had both motive and opportunity? And who would have chosen such a macabre and vicious weapon to accomplish the deed?

In my opinion, the most likely culprit is, in fact, the "wild-eyed man" who was seen by several witnesses about the house on the morning in question. This man would have been William Borden, illegitimate son of Mr. Borden, and he was, at the time, trying to extort money from his wealthy father who was reportedly preparing a will. This theory is well supported in Arnold Brown's book below.

Most Plausible Theory of the Borden Murders 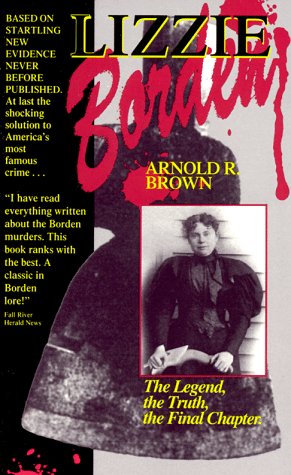 According to Brown, there was an illegitimate son of Andrew Borden's whom the family all knew about, but was never discussed. Just prior to the murders, both Lizzie and Emma had been angry with their father who was apparently planning to disburse his fortune via his will in ways that would not be of great benefit to them. With changes to the will looming, Lizzie contacted the illegitimate son, named William, to muster his help in persuading their father against it.

Brown speculates that William, not being of very sound mind, had a particular hatred for Abby, whom he saw as having taken the place of his own mother who "should have" married Andrew Borden. While he was waiting for Mr. Borden to return from town, when he planned to confront him about the will, something ignited his fury, probably Abbey mocking him or telling him that he had no chance of an inheritance, and he killed her with a hatchet which he carried with him at all times in a burlap bag.

He then waited for Mr. Borden to return, probably confronted him and perhaps argued. Mr, Borden likely dismissed him, turned his back to him and laid down on the sofa, ignoring the agitated William. His rage re-ignited, William then hacked his father to death and left the house. Indeed, there were some witnesses who saw an unknown man near the house just after the time of the murders. He was never identified.

Lizzie, according to Brown's theory, then allowed herself to be named a suspect rather than disclosing the "real" killer so that, once acquitted, she and Emma would be the only and undisputed heirs to the Borden fortune rather than face the possibility of having to share with any heirs of their half-brother. She took a terrible risk in the name of greed - a gamble that she won.

Lizzie Borden Lives Out Her Life

Whether Mr. Brown is correct in his estimation of what happened that hot day in August 1892 will never be known. But, of all the theories that have been concocted throughout the years, his may be the one that ultimately makes the most sense.

Lizzie Borden lived out her life in Fall River in a bigger and more luxurious home that she named 'Maplecroft'. She died 1st June 1927 at the age of 66. As far as anyone knows, if she did know what happened on that horrible day, she took it to her grave.

The house on Second Street in Fall River, Massachusetts, where the murders took place is now a bed and breakfast, and guests may spend a night in the bedroom where Abbey Borden was murdered. It has been restored to much the way it was on that fateful day, and tours are available for Borden enthusiasts.

Don't forget to answer the poll below!

Would you stay overnight in the Lizzie Borden House?