Engagement rings are very special and so we are always fascinated to see what ‘real life’ princesses will receive when they get engaged.   The royal choices for engagement rings are often reflected in society.   The sale of emeralds increased when Princess Mary, the Princess Royal received an emerald engagement ring in 1930 and who can forget the rush on the sale of sapphire rings after Lady Diana Spencer started wearing one? 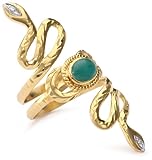 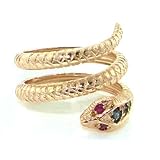 Snakes were seen as a symbol of eternal love and so she thought that made her engagement ring the ultimate token of 'happily ever after'.

I haven't been able to find any images of her ring, but apparently the snake's head was an emerald which is why I've featured two snake rings here that contain emeralds.

During the period before the Victorian era (and even during) engagement rings often bore the wife to be’s birthstone in them and in Queen Victoria’s case (being born in May) her birthstone was an emerald.

Queen Victoria loved her snake engagement ring that was designed especially for her by her beloved Prince Albert and it is believed that she was wearing it when she was buried.

When Queen Victoria’s son the future King Edward VII married he gave his wife Alexandra a classic Victorian era ring. During the Victorian era a lot of rings were given that spelt out things using jewels such as DEAREST and LOVE.

As you can see from the DEAREST ring opposite you simply take the first letter of the gemstone used as in Diamond, Emerald, Amethyst, Ruby, Emerald, Sapphire and Tanzanite.

Rather than the rather pedestrian DEAREST or LOVE Alexandra’s ring spelled BERTIE which was the name that she called her husband by. The stones used were beryl, emerald, ruby, topaz, jacinth and emerald. I’m not sure about the use of jacinth, but I don’t believe that Iolite had been ‘discovered and named’ at that stage so it may have been regularly used as an I.

Little is ever mentioned about Queen Mary’s engagement ring – perhaps because she was engaged twice?? After the death of her first fiancé and heir to the British throne – Prince Albert Victor, she became engaged to his younger brother (now heir to the throne), Prince George.

I have read conflicting reports that her first engagement ring was a ruby, however the dates reported would indicate that it was her second engagement ring. I think a big part of the confusion may have come about as her father-in-law Edward VII presented her with a beautiful ring featuring marquise shaped diamond surrounded by rubies as a wedding gift when she married Prince George, Duke of York.

Mary loved jewelry and as Queen of England acquired a lot of it, much of which was passed down to her granddaughter the present Queen Elizabeth II.

When Edward VIII decided to choose the woman he loved over the throne of England he presented Wallis Simpson with an emerald engagement ring. Edward and Wallis loved jewelry and were always getting pieces remounted.

Originally the piece was a rectangular emerald that weighed 19.77 carats and was set within a stylized leaf border with several diamonds. The engagement ring was remounted in a different design, however, on at least one occasion.

When Lady Elizabeth Bowes-Lyon finally accepted Prince Albert’s (the future King George VI) proposal (and rumor has it that he had to ask her on three different occasions) she spoke to reporters and let it slip that she was getting a sapphire engagement ring. The royal family were not amused and she was careful never to give another interview.

Apparently sapphires were chosen for Elizabeth’s engagement ring because they were her favorite stone. Although we know that her original engagement ring was a sapphire and diamond one Queen Elizabeth did start wearing a pearl and diamond ring on her ring finger during the 1950s. This ring has often, mistakenly, been referred to as her engagement ring.

Queen Elizabeth II was given a diamond engagement ring by Prince Philip.   What made this ring even more special was the provenance of the diamonds used.   Prince Philip was born as Prince of Greece and Denmark, but his family were exiled from Greece when he was a small child.   A rather impoverished European royal, his mother Princess Andrew of Greece did have some royal jewelry and the diamonds for Queen Elizabeth’s engagement ring came from one of her tiaras.

Prince Philip designed the ring which is made of platinum and has a 3 carat diamond as the centerpiece flanked with five diamonds on each side.

When the Queen’s sister Princess Margaret became engaged to Lord Snowden he designed a ruby engagement ring for her.   Fashioned to look like a rosebud surrounded by diamonds he designed it with her middle name of Rose in mind.

When Charles’ brother Andrew proposed to Sarah Ferguson he also offered up a ruby ring…..although the story goes that he presented her with an emerald to which she said she wanted a ruby!

The ruby is not a stone used very often in engagement rings within the British royal family as there are a number of bad superstitions surrounding them and seeing that both Princess Margaret’s and Sarah Ferguson’s marriages ended in divorce I don’t foresee a rush on rubies for any future royal bride!

There was quite a controversy surrounding Princess Diana’s engagement ring. Apparently when Prince Charles proposed he didn’t have a ring as he wanted her to take time and think about the change marriage would bring to her life. Diana was eager to get an engagement ring so instead of waiting for Charles to get one designed they went to the jewelers and she chose one off the rack (so to speak). This was unheard of in royal circles and meant that everyone now knew how much the ring was worth!

You can purchase a copy of Princess Diana's engagement ring at Emitations, a website known for it's imitation celebrity jewelry.

Princess Diana’s engagement ring has often been copied and is seen as a twentieth century classic. A large oval sapphire surrounded by 14 diamonds and set in white gold this ring is believed to have been left to Prince Harry.

Camilla’s engagement ring is a diamond one that comes with history. The ring was left to Charles by his beloved grandmother Elizabeth, the Queen Mother. Contrary to some rumors this was not her engagement ring, but a dress ring that was given to her by her own mother-in-law Queen Mary upon the birth of our present Queen.

Set in platinum this diamond ring is designed in an art deco fashion and contains and emerald cut diamond in the center with three diamond baguettes flanking it on both sides.

The first of the Queen’s grandchildren to wed was Princess Anne’s son Peter Phillips and he chose Autumn Kelly to be his bride.   Autumn’s ring was a 3 diamond ring set in white gold.

After years of courting Prince William (2nd in line for the British throne) Kate and William have finally announced their engagement.   The wedding will take place in 2011, but what about the engagement ring?   Well it appears that some pundits were right and Kate will be wearing a 'recycled' engagement ring!

In these days of economic hardship it wasn't a case of the Royal family not having enough money for a new ring, but as Prince William said it was a way of keeping his own mother involved in their engagement.