This is the plan I used while tutoring a Classical Conversations Cycle 1 Week 24 abecederian class. I have included all the subjects including new grammar, fine arts, presentations, science experiments, and review game. I also added my weekly parent email. This is not an official tutor plan. It's simply what I did. I'm sharing it so other tutors can use it as a springboard from which to plan your own lessons that are tailored to best meet the needs of your own class.

(Class set of trivium maps, dry erase markers, and small pieces of paper towels will already be at each seat.)

-Have the children use their dry erase markers to quickly trace around the borders of the continents and then erase them. (Be sure to emphasize that they should focus on the basic shapes, not the details.)
-Have the children put the caps on their markers and lay them down.
• Point out the locations on my map one by one. (I say, “Eyes and pointer fingers up” each time before I introduce the next location.) Each time have the children find the location on their maps using their fingers. They say the location, and I confirm, “Yes, that is…”. Repeat.
• Show me/Tell me the locations using a dry erase marker.
-Show me where [location] is. Put a dot on it. [Repeat this for each location.]
-Put the caps back on the markers, but don’t erase anything yet!
• Go through the locations with me while erasing locations one by one using the piece of paper towel. (Do them out of order.)
***Mom/Dad Helper: Collect markers and maps and return to tutor bag. Throw away paper towel pieces.***

(*At home we’ll be including the tune Jesus Loves the Little Children by Dana Johnson.)

Follow the directions of your director. As a community play Twinkle, Twinkle Little Star and sing The Orchestra Song together. (If you have time, practice together as a class first.)

Pray. Bathroom break. Get snacks from snack basket and have snack while listening to memory work CD or Mozart's Piano Concerto no. 22 in E-Flat, Third Movement.

*While children are having their snack time, my parent helper and I set up each of the Review Game stations.

(Some of the introduction script came from CCC user rruggles.) 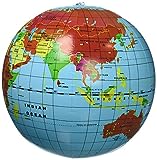 Inflate World Globes (1 Dozen) - Bulk
Since the children are learning about the markings on the globe, I gave them each an inflatable globe that I purchased as a set. The kids really enjoyed these!
Buy Now

Today was bittersweet! I am going to miss getting to see you all every Thursday! I will cherish the time we have spent in community together! Hopefully we will have numerous opportunities to get together over the summer!

I am looking forward to celebrating with you at the Presentation event next Thursday night! Everyone will have an opportunity to recite the history sentence they selected, so make sure to have your child practice their sentence a few times before next Thursday.