All Rockhopper penguins have bright orange to reddish orange bills. Underneath the mandible of the Eastern Rockhopper is a pink line of fleshy skin. The rest of the subspecies has black under their mandible. They are predominantly black with a white front torso. The feathers toward the back of their head are spiked up. They have pale web feet and black leathery flippers. Some Rockhopper penguins have white stripes along their cheeks but the cheeks of juveniles are pale. The younger chicks are fluffy versions of the adults without the yellow crests.

Being a relatively small penguin, adults can reach a height of 18 to 23 inches (48 to 58 centimeters). The average Rockhopper penguin weighs in at approximately 5 pounds. However, there have been a few that have reached 11 pounds. For the most part both males and females look the same. However, the males can be larger in size than the females.

Rockhopper penguins breed in the summer months of the Southern Hemisphere starting in October. The breeding colonies are relatively small due to their aggressive disposition.They will make their nest by digging a hole and lining it with grass or choose a location among tumbled boulders of rocky shores. The females will typically lay two eggs. However, the first egg is smaller and is typically rejected by the parents. Both male and female Rockhopper penguins take turns incubating the egg until it hatches about 35 days later. They continue to care for the chick mutually until around March when the chick is ready to be self-sufficient. The average life span of a Rockhopper penguin is about ten years. 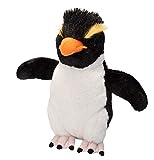 Like previously stated, Rockhopper penguins got their name because of their ability to hop from rock to rock. Their preferred habitat is the rocky shores of various islands across the Southern Indian Ocean, the South Atlantic Ocean, and the Southern Pacific Ocean.

The Eastern Rockhopper penguins enjoy spending their time in the Indo-Pacific islands of Prince Edward Island, Heard Island, Macquarie Island, Campbell Island, Antipodes Islands, and many others in the region.

Unfortunately, their decline in habitat has placed them on the International Union for Conservation of Nature (IUCN) list as being a vulnerable species because of their decreased population. Because Rockhopper penguins are opportunistic feeders, dining on small fish, squid, and crustaceans, their habitat has become polluted with human waste and debris. This causes their food supply to either diminish or become contaminated; making the penguins more vulnerable to death and disease. Conservation efforts are being done to try to increase the Rockhopper population but since they are so aggressive, this makes it difficult on scientists to study them much less breed them.