Charles Lindbergh and the Spirit of St. Louis

The Man Who Conquered the Atlantic

The iconic image of Charles Lindbergh hurtling over the dark Atlantic Ocean in his tiny monoplane "The Spirit of St. Louis", has enthralled people since Lindbergh first touched down in France in 1927. Many consider it the greatest achievement in the history of flight. There have been films, paintings, and books celebrating the eventful crossing. Traversing the Atlantic Ocean was an incredible gamble which numerous others had tried and failed to complete. When Lindbergh left the ground at Roosevelt Field in Long Island and settled in over the Atlantic, he was as alone as any person has ever been. He carried no radio on-board, feeling that the radios of the time would have been unreliable that far out over the ocean. He also had no parachute, opting instead to carry extra fuel.

The plane itself was designed with no forward looking windows. Two side windows and a small skylight were the only way to see out during normal flight. The cabin was so cramped Lindbergh could barely stretch his legs and he sat in a wicker chair. His meals were sandwiches from a paper bag, and a canteen of water. He was flying a single engine aircraft, and if he had any emergency come up that forced him to ditch the plane, the icy cold Atlantic would be the only witness. Many experts felt the plane he flew was not up to the task of flying over an entire ocean. But it was in this small monoplane called “The Spirit of St. Louis” that the most celebrated flight of all time was achieved.

A Prize for Crossing the Ocean

In 1919, a man named Raymond Orteig offered a $25,000 prize for being the first to travel from New York to Paris. Orteig, a hotel magnate, got no takers for a few years until aircraft had advanced to the point where pilots felt they could make the crossing safely. Numerous well known aviators were preparing to cross the ocean and fly to Paris. A number had already tried and failed. To the surprise of many it would be an obscure air mail pilot who successfully crossed the Atlantic and touched down in France.

By 1926, Lindbergh had been working carrying the mail by air with a start-up company. They flew old reconditioned WW1 era aircraft, and emergency tools for a long while were a single flare and a pocket flashlight. It was seat of the pants flying at it's ultimate, and helped prepare Lindbergh for flying under the most primitive conditions possible. Flying through rain, and sleet in an open cockpit in an aircraft which didn't even have running lights for years certainly prepared Lindbergh for any kind of adverse conditions. While flying the mail, Lindbergh planned how he would get financing for a aircraft that could make the flight across the Atlantic ocean. 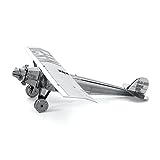 Lindbergh managed to get some backing from St. Louis businessmen, and went to New York to talk to the Wright Corporation about purchasing an airplane for the journey. However the aircraft he wanted was not for sale, and all the aircraft manufacturers insisted that a single engine airplane could not make the journey. It would be reckless and dangerous to make the attempt. A tri-engine plane would be the only way to go, but Lindbergh didn't agree. He felt three engines added weight, and were difficult to manage during bad weather. Besides which a tri-engine plane proved to be too expensive. A single engine aircraft would do.

Numerous telegrams to aircraft manufacturers were sent out with no success. Finally a small airline who also built airplanes in San Diego, called Ryan sent a telegram to Lindbergh stating that they could meet his requirements, and could build the plane in two months, allowing for a spring departure. Lindbergh met with the engineer, and owners at Ryan and decided that they had a deal.

The Spirit of St. Louis
Charles Lindbergh's own account of his record breaking flight.
Buy Now

The Spirit of St. Louis

Charles Lindbergh flew to San Diego to oversee the manufacture of the custom built aircraft. The Ryan Company had promised to complete the plane in two months, and they worked heavy overtime, and sometimes around the clock to do so. They were under the gun because some aviation heavy hitters were preparing their planes to attempt the flight as well (and they were ahead time-wise of Lindbergh).

Lieutenant Commander Richard E. Byrd was planning to mount a transatlantic flight, as was Clarence Chamberlain who had already broken the endurance record for flight. Many other well known names in aviation were also making their plans, so Lindbergh and the Ryan Company crew had little time to spare.

Finally the aircraft was ready, two months to the day they started on it. Lindbergh gave it the name The Spirit of St. Louis in honor of his St. Louis backers. The monoplane (single engine) was created exactly the way that Lindbergh desired. The aircraft was built purely for range, ignoring creature comforts, and room for passengers. The wingspan was increased, and an enclosed cockpit with no extension from the fuselage were added for that purpose. With no front window, Lindbergh had to bank the plane to see what was directly in front of him.

Even for the time, it was an unusual looking plane. It was given the number NX211. The N is the designation for a U.S. Aircraft. The X stood for experimental. Finally after a few quick test runs, Lindbergh was ready. He flew cross country from San Diego to St. Louis, and then from St. Louis to New York, both non-stop. It gave him a chance to get used to the way the Spirit of St. Louis handled. Once in New York, Lindbergh joined the other aviators doing final checks and waiting for the weather to clear.

Lindbergh Takes Off on Historic Flight

On the morning of May 20, 1927, the heavily laden Spirit of St. Louis was ready. The other fliers were still testing and waiting for weather forecasts. Lindbergh was concerned that the 5,000 lbs of fuel would prevent the aircraft from getting off the ground, or even worse cause it to crash back to earth and explode. However the plane slowly lumbered into the air, and headed out over Long Island. The miles passed by as he skirted some storm cells over Nova Scotia, and made good time on his way to Newfoundland.

A major crisis began as Lindbergh began fighting off fatigue. He had only been able to sleep an hour or two before the changing weather had opened the window for him to take off, and now it was badly affecting him. He managed to shake it off, and began heading out to sea. Up until now Lindbergh had been mostly over land, from this point forward the Spirit of St. Louis would be flying over the trackless Atlantic.

Almost immediately Lindbergh was surrounded by large thunderheads. He tried to fly over them but began getting ice on his wings and was forced to backtrack and attempt to go around the massive cloud formations. The aircraft sped on in darkness with only the luminous dials on the instruments, and the occasional stars peeking through the clouds to go by.

Now the Spirit of St. Louis was over halfway to Paris. Lindbergh held a steady course as dawn began to break, and the wind became noticeably warmer. It was when the sun began rising that the desire to sleep almost overwhelmed Lindbergh again. He again managed to fight it off as he went back into fog, which lasted for long stretches, and kept the sleepy Lindbergh 's eyes glued to his instruments. Hours slowly ticked by as Lindbergh passed each hour by in his logbook.

Suddenly a some dots appeared on the horizon. As he flew closer, Lindbergh saw that they were small fishing boats. Shortly after the coast of Ireland was in sight. The most difficult part of the journey was over. Lindbergh flew over the tip of Ireland, passed the Irish sea, and then over Cornwall in England. Finally as night was again falling, Lindbergh passed over the coast of France. Before long the lights of Paris were in his sights. He landed at Le Bourget airport to a tumultuous greeting. The flight from New York to Paris had been achieved.

Charles Lindbergh became a well known celebrity for the rest of his life. The little silver monoplane the Spirit of St. Louis is arguably the most famous airplane of all time. Seeing the aircraft through modern eyes, it's a wonder he made it as far as he did. The thought of Lindbergh hurtling through the air over the cold, dark Atlantic without being able to see in front of him (unless he banked the plane right or left), would give even the hardiest adventurer pause. If you are ever in Washington D.C., the National Air and Space Museum is now the home of the "Spirit of St Louis".