Sealth was Given the Power of the Thunderbird

Sealth of the Duwamish and Suquamish tribes ~

Chief Seattle's real name, in the Lushootseed language, was Sealth. It is the Duwamish-Suquamish name his parents gave him at his birth. It is a difficult name to pronounce in English. The phonetic sound is "See-aht" with the 't' pronounced hard and quick, sounding like 'tch'.

Old Chief Seattle was the largest Indian I ever saw, and by far the noblest-looking.

Seattle had control of six tribes in the area and, as his father before him, was able to maintain an amiable relationship with the early Europeans. He even gave protection to the early white settlers when threats and attacks by other tribes were a danger. In gratitude of this and his friendship, Seattle, the city, was named after him.

Although he had amiable relationships with the Europeans, he held strong to him the ways of his ancestors and his people.

Our religion is the traditions of our ancestors, the dreams of our old men, given them by the great Spirit, and the visions of our sachems, and is written in the hearts of our people.

Sealth was born in the Suquamish winter village on Blake Island in Old Man House. The 600 foot long winter house was built by Sealth's father and Chief Kitsap, an uncle of Sealth's. This is where Sealth grew up.

The winter village is on the shoreline of Agate Passage. Sealth's father was Schweabe, a Suquamish chief. Schweabe lived on Bainbridge Island, across the Puget Sound from Seattle. Sealth's mother, Scholitza, was the daughter of a Duwamish chief. According to the custom of the Duwamish tribe, the matrilineal descent determined that Sealth was Duwamish.

The Only Known Photograph of Chief Seattle, Taken 1864

In his youth, Sealth had a vision that gave him the power of the Thunderbird, which is a great and respected symbol for the Pacific Northwest Indians. Throughout this beautiful area the Thunderbird is very prominent in native art. The Thunderbird is a mythical bird of enormous size. It is a supernatural being of great power.

Legends claim that the flapping of his wings have caused earthquakes and avalanches on Mount Rainier and he created powerful thunderstorms when the force of his wings brought clouds together. The eyes of the Thunderbird glow brightly and when he blinks it is as if lightning is striking along with the thunderous claps of his wings. The people in early times began painting beautiful images of the Thunderbird, in bold colors and strong lines, emphasizing his wings and eyes. There is often an eye or face on the breast of the Thunderbird to symbolize his great spiritual power. These images are done to appease the great bird so as not to bring anger or trouble to the people.

Seattle had the natural instincts of a leader and to be a great diplomat and orator. It had been recorded by those who knew him that Seattle, when he addressed a group, had a voice like thunder that could be heard a mile away. He was known for his intelligence, courage and power. His word was law to his people, and like the Thunderbird, he was highly respected by all who knew him -- he was loved by his friends and feared by his enemies.

The Thunderbird on top of Totem Pole

Early settlers reached Puget Sound in 1846, and Seattle (still known as Sealth) welcomed them. He was known as a friend of the whites. When Col. Isaac N. Ebey and B. F. Shaw visited Elliott Bay in 1850, Sealth greeted and welcomed them.

Ebey's enthusiastic report of the land, in the Oregon Spectator just after this, encouraged more settlement in the Duwamish River Valley. Even though the settlers preferred to keep the Native people separate from their own, this did not discourage Sealth from his friendship to the whites. 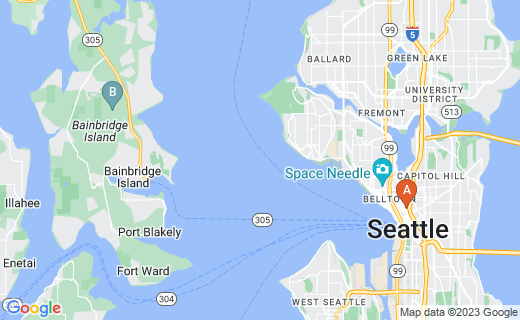 The city was named after Chief Sealth (Seattle).

The Famous Speech of Chief Seattle

The famous speech that was said to have been given by Sealth in 1854 was originally written by Henry A. Smith, 33 years after the death of Sealth. Smith had been at the presentation and expanded on his scattered notes. In 1891, Frederick James Grant reprinted the speech in his History Of Seattle. In 1929, Clarence B. Bagley added to Grant's version and reprinted the speech in his History Of King County, Washington. John M. Rich, in 1931, reprinted Bagley's version in Chief Seattle's Unanswered Challenge. Ted Perry, in 1971, was the latest to reprint his own version of anachronistic material for a movie titled Home. The movie was not a hit and quickly disappeared, but it was that version of "Chief Seattle's Speech" that is the most popular and most attributed to Sealth.

Regardless of what the true version of the original speech was, the Suquamish tribe have taken the words to their hearts and claim it as their own history - for these beautifully written words are symbolic of the life and ways of the tribe and the way they feel about their homeland, of which they were the first inhabitants. You can read the entire speech at the related link below this article.

Kikisoblu was Sealth's eldest daughter and was famous in her own right. Like her father, she refused to leave her home and remained throughout her life, living in a small cabin by the waterfront in Seattle.

Among other people who loved and admired her was Edward S. Curtis, the most famous photographer of Native Americans. He often photographed Princess Angeline, as the people of Seattle called her. It is said that it was she who inspired him to go on his long journey to capture the essence of the Native American people in their natural settings.

An announcement from the Holy Names Academy Chronicle began with:

"May 29, 1896. With the death of Angeline Seattle, died the last of the direct descendants of the great Chief Seattle for whom this city was named."

End of an era

When Chief Seattle died it marked the end of an era. During his life he saw remarkable change for not only his own people, but the whole area where he was born, grew up and became a leader of.

Throughout the Indian Wars of the 1850s, Sealth gave protection to and maintained close friendships with white leaders and settlers. He did not get involved in the famous Battle of Seattle and made sure none of his people did. Seattle was well known as a peacekeeper.

Seattle remembered when as a young boy he saw the ships of the Royal Navy enter Puget Sound. Seattle was in one of the canoes full of Natives who went out to see the HMS Discovery and the Chatham. It was the Vancouver Expedition of 1791 - 1795, led by Captain George Vancouver. Many years later, Seattle was among the many Natives who traded with the Hudson's Bay Company, a new settlement near what is now Olympia, Washington. Seattle saw new settlements and more and more settlers coming to his homeland in his life. Little did he know in the beginning of all this that one day the largest city in the Pacific Northwest would be named after him.

It is amazing to know that Seattle welcomed the new settlers and made many life-long friendships among them. There were battles between other tribes and the settlers. Seattle was a great war leader in battles with other tribes long before the Europeans began coming into the Puget Sound area -- fighting with the Europeans was just not acceptable to Seattle. He very much admired them and their ways and made it clear he wanted only friendship.

Sealth died in his homeland on Bainbridge Island from fever and illness on June 7, 1866. James Wehn, sculptor of the local area, created a magnificent statue of Sealth, Chief Seattle. The statue stands watch over Tilikum Place in Seattle Center and is in the National Register of Historic Places. Sealth was buried in Suquamish, Washington on the Port Madison Indian Reservation.

... all things share the same breath - the beast, the tree, the man ... the air shares its spirit with all the life it supports."

I was born in the Pacific Northwest Puget Sound region. It is a profoundly beautiful area, full of nature at its most powerful.

From my earliest days of memory, I knew about Chief Seattle. Along with the majestic Mount Rainier and the many legends of her, the great Thunderbird and its power, Chief Seattle dominated the whole region. Even today, long after he left Mother Earth, Sealth is a legend of peace and greatness. To walk in the same areas he did is like saying a prayer to Great Spirit, for the respect and love of Sealth is still in the land and the hearts of the people. The respect my father showed when he spoke of Sealth instilled in me great respect, pride and love for my homeland and for the great chief who welcomed the early settlers with open arms.