What is your favorite gift to give students at Christmas?

This is the 12th lesson in a series of 27 hands-on lessons covering American History through 1865. This lesson focuses on Colonial Christmas and Epiphany. Drink wassail and munch on Twelfth Night Pound Cake while caroling and learning about the holiday traditions of the time. This was the lesson I used just before Christmas break. I used this plan while teaching a 45 minute history class for children in Kindergarten, 1st, & 2nd grades. Use these fun lessons with your classroom, homeschool, after-school program, or co-op!

1. Ask the children, "What is your favorite part of Christmas?"

2. Discuss some colonial (including time of American War for Independence) customs while pointing to the parts on a map of the 13 Colonies.

3. Read The Story of St. Nicholas: More Than Reindeer and a Red Suit by Cheryl Odden. 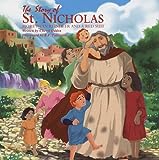 The Story of St. Nicholas: More Than Reindeer and a Red Suit
This is my favorite children's book about the historic Saint Nicholas to use as a read aloud for classes. The illustrations appeal to children. It is the perfect length. It doesn't reveal whether or not Santa Claus is real or not, leaving that discussion for parents.
Buy Now

4. Ask who has a Christmas tree up & decorated at their home. During the Colonial period, there were not many Christmas decorations. They maybe added greens to their church (holly, ivy, mountain laurel, and/or mistletoe), but they did not really decorate their houses. That means they didn't have Christmas trees.

5. They did have Christmas music. Since Christmas was usually spent going to church, they would sing Christmas carols like Joy to the World by Isaac Watts. Let's sing the first verse of Joy to the World together. [Pass out the words & let the children put them in their history binders.]

6. Wassailing is from old English word, “waes hael” which means "be well." Around Christmas time women or children would travel through the town passing out a hot drink & expecting payment for it, kind of like begging from door to door. Teach the children the refrain from the Wassailing Song & then sing it. (The children probably won't know this song, but they can jump in each time with the refrain while I, the teacher, sing the main verses quickly & the refrain slowly with them.)

HERE WE COME A WASSAILING

We are not daily beggars that beg from door to door,
We are neighbors' children whom you have seen before (refrain)

Good master and mistress as you sit by the fire,
Think of us poor children who wander in the mire (refrain)

God bless the master of this house, likewise the mistress too,
And all the little children that round the table go. (refrain)

8. Ask the children what their favorite Christmas food is. During the Colonial period, there were no main traditional dishes, though they did feast on lots of meats and fish (as fresh produce wasn't readily available during the winter months).

9. In the Southern colonies, their big celebration was not on Christmas. It was 12 days later on January 6, which is when they celebrated the Wise Men finding baby Jesus & giving him gifts. They called this Epiphany or Twelfth Night.

10. One tradition was to bake a cake & with a dried bean baked into it. The bean represented baby Jesus. Whoever would get the slice of cake with the bean in it would get to be the king or queen (honored guest) of the celebration. Allow children to each try a piece of “Twelfth Night” pound cake & make sure someone gets the slice with the dried bean.

11. Pass out class gifts as this was the day when gifts were sometimes passed out. Gifts might include little treats such as gingerbread men or dried fruit.

Joke: How many gifts can Santa Claus fit in an empty sack?

Only one – after that it’s not empty any more!