"A Battery at Close Quarters. Being the Story of the Eleventh Ohio Battery At Iuka and Corinth." 1909, by Henry M. Neil, of the famous Columbus hotel family.

Diversity of Soldiers From Columbus

Columbus, Ohio was founded in 1812 and welcomed immigrants from all over the world. Neighborhoods were named for immigrant groups and some of these names have stuck into the 21st century. German Village in the south part of the city os one of these, commemorating the German immigrants that built much of the city industries and all of its early breweries.

Our Germans also made up a large proportion of the Union Soldiers in the Civil War, arriving at local military camps in Columbus from New York, Pennsylvania, and Ohio.The city also supports an Italian Village and its Continent Mall and apartment dwellings in the north end of town were built to resemble a European town before World War II.

We do not have an Irish Village, but we do have the grand Dublin, Ohio as a suburb that has been one of the fastest growing cities in America. It is difficult to believe today thqat in the first half of the 1800s, Dublin was a Wild West town with saloons, mud streets, and shoot outs.

Another Columbus neighborhood, Iuka Ravine, is named in memory of the Confederate States of America and a battle in Mississippi.

Different areas and even streets in Columbus were named for city founders of many ethnities and for ethnic groups. Other neighborhoods were named for famous American Civil War battles and one if these lies between Fourth Street and Summit Street just east of The Ohio State University in and around the Iuka Ravine.

The university opened in 1873 and the University District from around 5th Avenue in the south to Hudson Street in the north and east to the railroad tracks east of Fourth Street began to develop quickly to accommodate new students, professors, and working class people as the schoool built new buildings each year. Famous author and humorist James Thurber lived between High Street and Indianola Avenue.

The ravine is named on both the city and national registers of historic places and honors the Neil family of Ohio as well as the Iuka battle. The Neil House Hotels were landmarks for decades downtown.

Neil Avenue runs north and south down the center of the OSU campus all the way to the Scioto on the Mile mile-long district of city parks in Downtown Columbus.

At the Battle of Iuka in the South, Union Army Major Henry Neil of Columbus was wounded, but survived. That's the Columbus connection: the Major moved into the ravine area area and named it. by 1872, a house owned by his sons in the ravine area was named Indianola, after the city closest to the Iuka battle in Mississippi.

Neil Avenue on the OSU Campus runs directly behind the main library. The land on which the renovated library stands once held the Neil family mansion and the family donated the land to the Ohio State University in 1870.

The family was active in banking and industry and by 1840, owned nearly all of the stage coaches traveling from West Virginia throughout Ohio and toward the western territories. 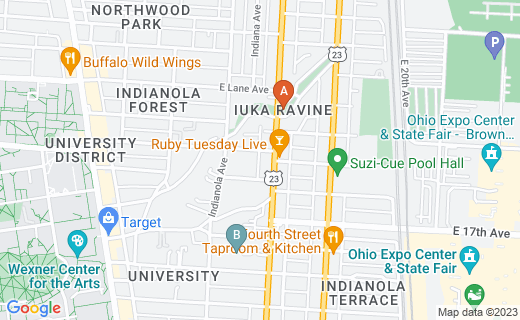 You can see Iuka Ravine in the center of the map below. The rest of the OSU campus, including West Campus, lies to the west, off the map.

Campus buses run quite frequently and free of charge around the buildings and the residences throughout the campus area, all the way to North Fourth Street past Iuka Ravine. Residents are free to use them, as are OSU students, thanks to an agreement between the university and the COTA bus system. 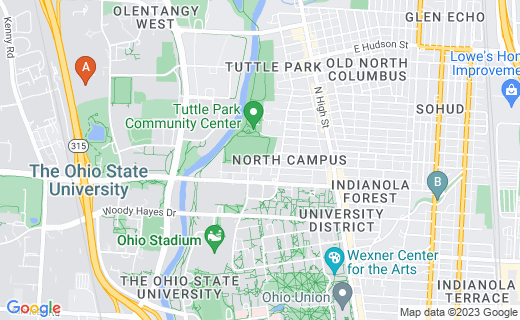 The local residents around Iuka ravine took it upon themselves in January 2013 to begin to refurbish and further redevelop the historic area and the neighborhood. While the area still has several attractive older homes owned privately, rental properties have increased and require regular maintenane and the removal of some graffiti each year.

The rustic ravine has been full of trees and shady paths for years, always good for walking and biking from North Fourth Street to the OSU Campus and High Street business district. However, in the last couple of years, the emerald ash borer has destroyed the elm trees from the mix and they need to be replaced with other native trees. The energetic residents received an Urban Infrastructure Recovery Fund grant for $80,000 replace trees, remove invasive non-native plants, and rework the landscape and ravine banks.

During 2008 - 2009, the city invested over a million dollars in rebricking the roadway from North Fourth Street, westward, and installed decorative street lights. A Block Watch has become more active in the neighborhood, and the urban grant is another aid to upgrading the area already in 2013.

Major Neil and His Artillery Unity at Iuka and Cornith

The North barely won the battles of Iuka and

Corinth in 1862 and Major Henry Neil was wounded three times in the first and once immediately thereafter upon entering the second battle. His artillery unit reportedly lost more men in a single battle (Iuka) than any other Union artillery unit in the war - over 50%.

He became a Colonel before the end of the war, having refused a commission and entering the Union Army as a private in April, 1861.

Location of the Battles of Iuka and Corinth: Northeast Mississippi 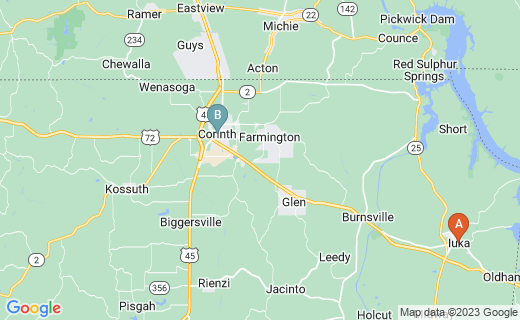