Cynthia Ann and her Daughter Topsana

Cynthia Ann Parker could not know that one day she would have a Comanche heart and die of a broken spirit. Nor did she know that one day, her eldest son, Quanah, would become the last Comanche chief and create a bridge for his people to meet the new world.

As a young child, Cynthia Ann was happy with the settlers in the fort. Children do not often think of the future or what could happen. The possibility of being torn away from her family and and all she knew to live a totally different way of life was too remote for her to even think about.

On a lovely spring day, Cynthia Ann was playing in the fort with her brother, sister and other children. She was happy. Her father, Silas M. Parker, had brought the family to Texas where he built a fort. Other families joined them and life, although difficult and different than what they had previously known, was new and challenging. They had great hopes for the future. Cynthia Ann did not know that an attack by the Comanche would change her life forever. She did not know that one of the war chiefs in the raiding party would one day mean more to her than anyone. To become a devoted Comanche woman was not in the mind of that happy little girl.

At the age of nine, on May 19, 1836, Cynthia Ann Parker was captured from Fort Parker in east Texas, near present day Groesbeck. A Comanche raid on the fort left a large number of people dead and five captives were taken. Among these captives was Cynthia Ann, granddaughter of Elder John Parker, her family's Patriarch. John Parker was a famous frontier Ranger and veteran of the American Revolutionary War. He was killed during the Comanche raid.

From Captive to Comanche at Heart

Four of the captives were later released after ransom, but, Cynthia Ann was to stay with the Comanche for twenty-five years. Her early life Christian teachings and ways of the whites were soon forgotten by Cynthia Ann. From a frightened, captive little white girl, she became a devoted wife of a Comanche Chief -- she was a beloved mother and Comanche at heart.

Cynthia Ann was born to Lucy Duty Parker and Silas M. Parker in Crawford County, Illinois. There is some dispute about her age, for according to the 1870 census of Anderson County, Texas, she would have been born between June 2, 1824, and May 31, 1825. When she was nine years old, her family moved to Central Texas and built Fort Parker, a log fort, on the headwaters of the Navasota River in what is now Limestone County.

After her capture by the Comanche, Cynthia Ann was adopted by a family of the tribe who learned to love and raise her as their own daughter. She learned from them the Comanche ways of the women of the people.

Peta Nocona was one of the war chiefs involved in the raid on Fort Parker. He had formed his own band of the Comanche, the Noconi. A few years after Cynthia Ann was captured, Peta took her as his wife. He honored and loved her so much that he never took another wife, which was a common practice of successful war chiefs of the Comanche. They had three children, the famous Quanah Parker, who became the last Comanche Chief, another son named Pecan (or Pecos), and a daughter, Topsanna ("Prairie Flower").

Cynthia Ann lived as a Comanche woman among the people who were proud, noble and rode with the wind. They were the children of nature and lived with respect and harmony upon Mother Earth. She was happy in this life and loved her family. She was a proud, loved, and respected Comanche woman. From a frightened, captive little white girl, she grew to become a devoted wife of a Comanche Chief and she was Comanche at heart.

Victim and Captive From two Massacres

In December 1860, Cynthia Ann and her two year old daughter were among a party of women and children who were tending the camp where they had supplies and food in ready for their warriors when they returned.

A troop of Texas Rangers, led by Lawrence Sullivan Ross, had been involved in the Battle of Pease River. After fierce fighting, the Comanche realized they were losing and fled. Peta and his two sons survived the battle. The Rangers attacked the camp where Cynthia Ann was. Many were killed. Among the captives were Cynthia Ann and Topsanna, her baby.

It is believed that some of the Rangers urged Ross to set Cynthia Ann and her daughter free to return to the Comanches. He considered it best, however, to return her to her white family. Ross sent her to Camp Cooper with a message to Colonel Isaac Parker, the uncle of a young girl kidnapped in the 1836 raid. When Parker mentioned that his niece's name was Cynthia Ann Parker, the woman slapped her chest and said, "Me Cincee Ann." Isaac Parker took her to his home near Birdville.

Cynthia Ann could never readjust to her white family and their way of life. Several attempts on her part to escape and return to her Comanche family failed. She was always recaptured and locked in her room. In the ways of a Comanche woman, she cut her hair short, as a sign of mourning.

Her brother, Silas Jr., was appointed her guardian in 1862, and took her to his home in Van Zandt County. When Silas enlisted in the Confederate Army, Cynthia Ann was sent to live with her sister, Orlena.

The major cause of Cynthia Ann's unhappiness was that she missed her husband and sons and never knew what had happened to them. In 1863, another burden of grief was added to her already unhappy life, when her daughter, Topsanna, caught influenza and died. Her baby girl was the last part of her Comanche life -- her only link to her beloved husband, Peta.

With the death of Topsanna, Cynthia Ann had nothing left to cling to or bring her the joy she felt with her Comanche people and way of life. Cynthia Ann knew no other life than that of the Comanche. She was a wife and mother of the Comanche. With her spirit now broken, she stopped eating and died, mourning the loss of her beloved family. Cynthia Ann was Comanche at heart to the last. She died in 1870 and was buried in Fosterville Cemetery in Anderson County near Frankston.

Cynthia Ann died without ever seeing her husband or sons again. She never knew that Peta had never taken another wife, for he died still loving his Nadua (Cynthia Ann's Comanche name). She never knew that her eldest son, Quanah, had become the last Comanche Chief and had bridged the gap between the Europeans and Comanche in order to save his people from certain starvation and death.

Twice in her short span on Mother Earth, this gentle spirit was ripped away from those she loved and all she held dear in life. The only peace Cynthia Ann must have felt after being torn away from Peta and her sons, was when she gave up and welcomed the arms of death, so her broken heart could heal.

When the physical self cries from emotional hurt and pain, there are others to comfort, empathize, and help heal. When the spirit is broken, cries, and withers from a heart that longs for lost loved ones that will never return and a way of life that has been shattered, then sometimes only the arms of death can heal.
~ ~ ~ ~

When I first wrote this article, there was not a whole lot of information available on Cynthia Ann Parker and her daughter Topsana. When updating the article I did more research and found a 12 part series of videos that provide a lot more information.

After watching part one of the above video series, I was surprised to learn there are serious discrepancies on the story of Topsana. Did she actually die when she was a baby? Did Cynthia Ann die from self--inflicted starvation after her baby was gone? Did Quanah do any research about what happened to his mother and sister?

There are so many questions and some answers in the video that shows the story of Cynthia Ann Parker is still unfolding.

I commend Meg Hacker, Director of Archives at the National Archives of Fort Worth, Texas for her in-depth research of Cynthia Ann and Quanah Parker. 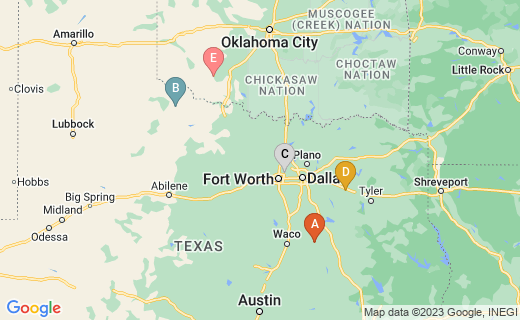 Site of Fort Parker massacre where Cynthia Ann was captured by the Comanche.

Pease River where Comanche women and children were killed - Cynthia Ann Parker and her daughter were captured by US Calvary.

Birdville where Cynthia Ann was returned to her original Parker relatives after Pease River Battle.

Van Zandt, Texas where Cynthia Ann and her daughter died.

To learn more about Cynthia Ann's son, Quanah, please read the short story of Quanah Parker - Last Chief of the Comanche People. Quanah never forgot his dear mother and did not rest till her remains were returned to him, where they now lie in peace together.