Which choice is NOT a branch of the U.S. government established by the Constitution?

1. Welcome everyone back from Winter Break & ask each child to share something nice that they did or got over the break.

The Need for Rules

3. Before the break we learned that America had to fight a war for 8 years in order to win its independence from England. Now they needed to come up with rules for the country. 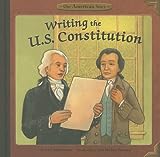 Writing the U.S. Constitution (Our American Story)
We read through a number of books on the writing of the U.S. Constitution, and this was definitely our favorite pick for a read aloud. It's the perfect length for young children and has illustrations that appeal to children. The text is clear and engaging.
Buy Now

5. Show a copy of the Constitution. Tell the children that the beginning is called the Preamble, & it explains why they are writing the constitution.

6. Learn the Preamble using a song, singing through it a few times. Do note that the SchoolHouse Rock song leaves out "of the United States" after "We the people," so we quickly added that in each time. You can either show the video from a monitor, or flip through We the Kids: The Preamble to the Constitution of the United States by David Catrow each time you sing the Preamble.

6. When the men, including James Madison, who made up the rules for our country are called our Founding Fathers.

7. After our Founding Fathers agreed on how the government should be run, representatives from each state had to sign it. Show Howard Chandler Christy's Scene at the Signing of the Constitution of the United States & hand out the coloring sheet. Have children color the main figures on their coloring sheet while going through them on the bigger painting or picture. Have the children put this in their History Notebook.

8. Review: What is the document we learned about today that tells the rules for how America's government will run? (Constitution) Who is called the "Father of the Constitution"? (James Madison) What do we call the first part of the Constitution? (Preamble) Let's sing it one last time. [Sing it again while flipping through the book.] In addition to the 3 books mentioned or used in the lesson, these were our favorites:

Liberty Kids: We the People

Joke: How is a healthy person like the United States?

They both have good constitutions!