The Hanging Gardens of Babylon, Facts and Five Possible Locations

Seven Wonders of the Ancient World

Were the Seven Wonders Real?

The Seven Wonders of the Ancient World were a big part of the Elementary School curriculum when I attended school. In my city, they were also a standard part of the architecture of open air shopping centers until nearly 1980. These attractions brought additional customers to the local shopping centers for a day of sightseeing and shopping.

The Hanging Gardens of Babylon and the Tower of Babel

Models of the Hanging Gardens

In Central Ohio, the Great Western Shopping Center was a huge retail complex of department stores, smaller shops, a movie theater, banks, and several restaurants. the open air mall also included seven large displays of reproductions of the Seven Wonders of the Ancient World in its parking lot.

Visitors from out of state drove all the way to Central Ohio to see these reproductions and local school children visited them often as an elementary school field trip until the 1980s.

The model of the Hanging Gardens of Babylon was very lifelike, with terracing and actual plants, but no one knew where Babylon was located at the time. The exhibit looked much like the color image from the 18th Century featured above.

Were the Gardens Hanging or Standing at a Height?

Rather than hanging gardens, many researchers agree that the garden plants stood in containers on the successively indented steps of the pyramid-like ziggurat in Babylon. Legend has it that the gardens contained many pools and fountains as well as plants, but this is unsubstantiated by the archaeological record of findings as yet. It is evident, though, that irrigation was used to bring water to the top of the structure to water the plants in a trickle-down effect of some sort.

The oldest ziggurat found to date is the Sialk ziggurat of 3,000 BC, although one part of it in the rear looks to be from around 7,500 BC. Located in Kashan, Iran it stands near the Fin Garden in the same city. The Fin Garden contains many pools and other water installations, all of which have a cooling effect in hot, dry weather. The Hanging Gardens of Babylon may have been arranged similarly, with pools and fountains among ornamental and even food plants.

Professional, academic and amateur researchers disagree upon an assumption by many that the Hanging Gardens of Babylon existed as such.

While sources discuss what form the gardens took and the possibility of their reality, several state that the gardens may have existed in 600 BC as part of the structure of a ziggurat that was a standard architectural element along the Euphrates River during the era.

The exact location of the gardens has been a matter for discussion until 2011 and that year's new evidence, but discussion continues still. Some researchers feel that there are two questions:

Several sources report that there is no mention of hanging gardens at all in the relevant cuneiform record of Babylon and, surprisingly, also no mention of King Nebuchadnezzar II’s wife Amyitis, for whom the King supposedly built the gardens in his desert climate in order to remind her of her greener homeland, Persia.

The archaeological record shows that the Euphrates River moved since those days, burying western portions of civilizations and the remains of the Hanging Gardens and its ziggurat for future excavators to find.

Still other researchers feel that the Babylonian gardens were in Nineveh (discussion and reference below).

If the Hanging Gardens existed, which the Chaldeans confirmed in writing, then the gardens and their ziggurat were buried when the Euphrates River shifted course with recurring floods, or possibly were pulled down in war.

Archaeology is an ongoing discipline and excavators continue to work at older digs looking for new evidence and artifacts and may find some new evidence near the rebuilt Babylon today. We do not know yet, but the Hanging Gardens might have been on the Marduk ziggurat that was dedicated to that Babylonian sun god. 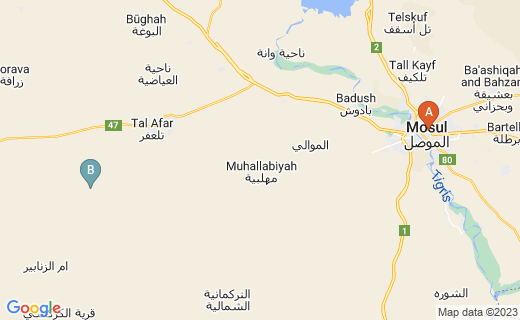 Analysis of New Evidence From 2011

The archaeological record shows that in or near the year 2000 BC in Mesopotamia, the Chaldeans left clay tablets on which they had written information. The writings described walnut groves and pistachio trees in hanging gardens of Babylon. This historical evidence seems clear.

The Chaldean language is Neo-Aramaic and spoken on the plain of Mosul, where Nineveh was located. This might suggest that the hanging gardens were in Nineveh, and if so, their current location as a rebuilt city means that the ruins were carried downstream and buried (see map below).

Another recent theory states that rather than hanging gardens, the installation at Babylon was a form of terraced garden, built in large stair steps as in the mage below.

The Fall of Babylon

Babylon fell in battle to the Persians in 539 BC, which means that the Persians may or may not have pulled down the hanging gardens in battle.

According to the works of the scholar Herodotus and Daniel 5:1-4 (the Bible):

In October, 539 BC, King Belshazzar (two reigns after Nebuchadnezzar II) held a feast in Babylon for 1000 party-goers, but used sacred vessels and utensils that had been stolen from the Temple of Jerusalem, for toasting other gods, even others than the usual sun god. A great disembodied hand immediately appeared and wrote on the wall in Aramaic the famous words “MENE, MENE, TEKEL UPHARSIN." Daniel was called to interpret: "God hath numbered thy kingdom and finished it (written twice). Thou art weighed in the balance and found wanting. Thy kingdom is divided and given to the Medes and Persians"

Regardless of whether the gardens were pulled down or not, the Euphrates River changed course during annual floodings and likely buried most of Babylon, whose ruins finally surfaced and were dug eastward of the river, where they sit today.

Currently, part of the ruins still lie beneath the riverbed of the Euphrates, waiting to be unearthed. This may occur soon, because the river is drying up. 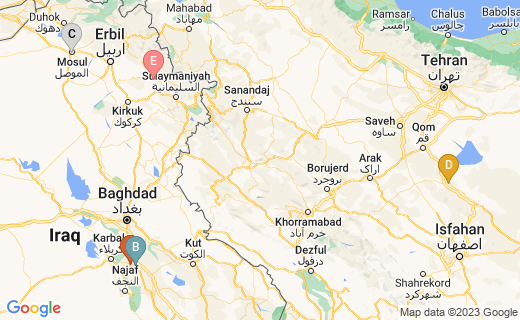 A possible site of the Hanging Gardens

In early 2012, a preponderance of evidence points to this being the site of old Babylon. If so, ruins were carried downstream to Babil.

Location of the Sialk ziggurat and the Fin Garden.

The ruins of Babylon were found as crumbled stone walls in 1899 during archaeological research sponsored by British museums and academic institutions. In 1983, Saddam Hussein began to rebuild the city, etching his name on the bricks used in construction. His project was interrupted by the War in Iraq in 2003.

The ruins today are located largely east of the Euphrates River.

The US Army Corps of Engineers entered Iraq during Operation Enduring Freedom in 2003 and unfortunately, did further damage. However, later in 2003, the US military and others began helping Iraqi agencies rebuild the ruins of Babylon as a historical preservation project. The photograph below illustrates a rebuilt city that looks very plain in 2005. In May of 2009, Iraqi leaders reopened the rebuilt city to the public as part of a cultural tourism outreach.

In early May 2013, two decades of research findings brought Dr. Stephanie Dalley of Oxford University to the conclusion that the gardens were built in Nineveh by the Assyrian ruler Sennacherib. However, a bas-relief images of the gardens that originated in Sennacherib's palace was discovered in the 1840s, but crumbled away.

Someone made a drawing of the bas-relief at the time of discovery, but no one is old enough at this time (the 2010s) to attest to remember and actually attest its validity. We have only the drawing in a pre-Civil War Era book in the UK and no validating evidence.

Another confounding circumstance is that researchers think that since Assyria conquered Babylon, then Assyria took the name of New Babylon, That is a possibility. reportedly, Sennacherib took the names of the city gates of Babylon and used them anew in Nineveh after Nineveh fell in 689 BC.

A good piece of evidence is that Dr. Dalley also feels that ancient historians who visited Babylon to see the gardens actually visited Nineveh, based on specific descriptions found in their writings. 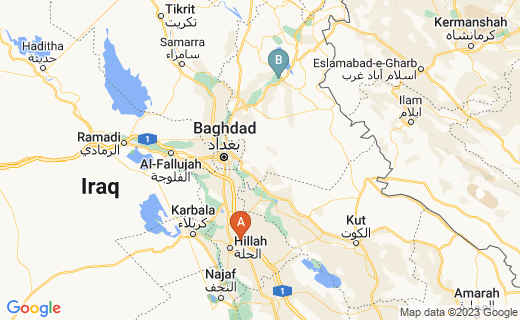 The river near old Babylon.

The river near Nineveh. 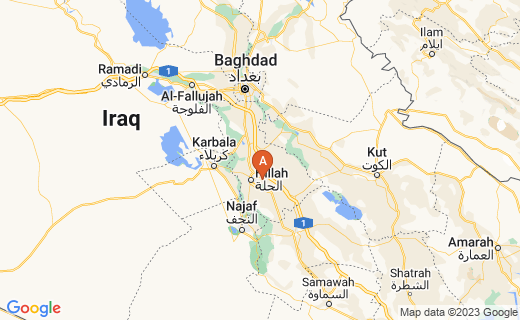