The FBI asks for help from amateur sleuths

Everybody likes a good mystery and this is a real one from the cold case files of the Federal Bureau of Investigation. Stuffed in the pocket of a dead man's clothes were two strange notes that not even the best of the best cryptanalysts can decipher.

The 41 year old body of Ricky McCormick was found in a field near St. Louis in 1999. It was the height of summer, June 30th. The notes were left in the victim's pockets and they are the only clues to the killer. Ricky seems to be the author of the notes, but the FBI thinks they point to the identity of the killer. The FBI has issued a public appeal for some fresh perspectives on the notes.

Although there is no reward for help in solving the murder case, or "cold case", the satisfaction of breaking the code is usually enough for amateur sleuths. They are looking for people that think cypher texts are easy and fun. If you do break the code or have an idea about how to break the code, the FBI is asking us to contact them at:

I've tried to make it easier to read...

This is how I think the top note reads:

The bottom note is easier to read, so I didn't try to "translate" it. Cryptanalysts can usually infer some information just from the handwriting.

One thing I noticed that almost every "word" ends with "E". What could that mean? It also looks like there are some measurements involved or directions to something. A life-long resident of St. Louis may be able to make something out of that.

Maybe it's a treasure map! Wouldn't that be a shocker? 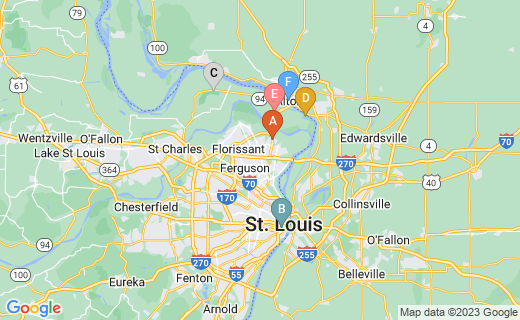 The body was found in an open area by the SE corner of the cornfield between the field road and a densely foliated levee, an old railroad grade.

One known address for Ricky McCormick and Sandra Jones

Photos from the area where Ricky's body was found

Ricky McCormick was born in 1958, he was 41 at the time of his death in 1999. His brother, Charles was born in 1959. Ricky was reportedly unmarried, but known to be the father of at least four children (from the St. Louis Post-Dispatch - Friday, July 2, 1999) Ricky was last seen on June 25, 1999 at Forest Park Hospital in St. Louis where he obtained medication for his illnesses. McCormick was unemployed and on disability welfare; he was not homeless. Death appears to be caused by a blow to the head.

Ricky, or his brother, Charles may have been married to a Vicki Young or a Sandra Jones. There is some confusion about who was married to whom. Vicky Young had a child from an unknown father who had the child support payments suspended in 1990. The child is also rumored to have been fathered by Ricky or Charles McCormick.

Vicki was accused of passing bad checks, possibly cheating on unemployment requirements and fraud. She allegedly never paid her bills. Not much is known about Sandra Jones.

11-1992: A criminal complaint was filed against Ricky McCormick

12-23-1992: An indictment was filed for 1st degree sexual assault (Rape, Weapon or Injury involving a child under the age of 14)

9-1-1993: Ricky McCormick entered a guilty plea to the criminal complaint.

Names associated with these cases...

These people were associated with Ricky McCormick at some point in his criminal life. Perhaps something in the cryptic code relates to one or more of these names:

An analysis from the smartest Hubber I know...

I had to write to Manna in the Wild to ask if he could shed some light on the crime scene notes. Here is his reply:

Yes - I saw this case too. It is curious. In the war, the Americans recruited the Navaho (Navajo) because of their unique language. They used them as crypto-translators. The enemy could not penetrate the language and so it was very successful. These notes may be similar if he did not base the language on anything known.

When a known language is encrypted it can be mixed with a random stream of data of the same length as the message and the message takes on the characteristics of the random stream. This too cannot be decrypted.

But it is impractical to use a key as long as the message, so key-based cryptography uses different methods with a shorter key. This often creates the possibility that the encrypted stream can be 'cracked'.

‘Standard’ methods of crypto-analysis include 'frequency analysis' and brute-force attacks and 'cribs' and so on. Often, the success demands a lot of encrypted text. In the case of the murdered victim, it appears that there is only a small amount of code, and it is out of context. These are both detrimental to cracking it.

It's obviously not a substitution cipher - usually you can crack these just by looking at it, so FBI would have tried that. How much further they went, I don't know.

I noticed, for example a word that uses an apostrophe. That might be a clue. Other clues are gained from knowledge of the victim's intellect, cunning, relationships, dealings, friends etc and could provide a crib. We are not privy to that information. When 'reading' the notes, it does sort of look like a language rather than a code. If so there might not be enough data to crack it. Those brackets and other punctuation, and the digits might be useful too.

Try to find out more about the character and his friends and relationships. They say he was 'street-smart' suggesting that he could be involved with drug deals or other crime. That in itself is possibly a clue -- perhaps there are other people on the other end of a crime ring who can read the note, or maybe it's his own personal 'blog' and he uses a random child-language no-one else knows. It could be full of its own language's spelling and grammar mistakes which are distracting for cryptanalysis.

Analysis used by permission from Manna in the Wild

How cryptographic analyists go about breaking a code...

Ciphers and Analysis Video How To

Save this hub so you can come back and leave notes as you think of them. If we all work together, we can solve this mystery!

Comments - Can you shed some light on the Ricky McCormick murder? Can you break the code?