D-Day and Operation Overlord in WW2 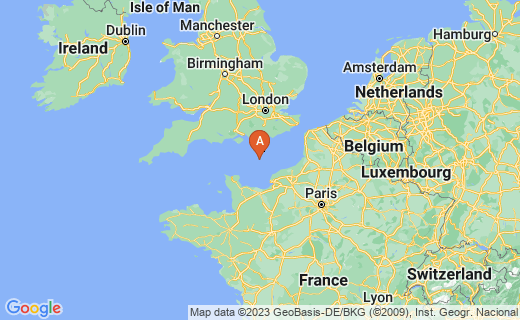 Operation Overlord was the allied invasion of France, and led overall by General Dwight Eisenhower. After long months of preparation, the allies began their landing on June 6, 1944, in Normandy France. Within about 5 days, 326,000 soldiers had come ashore suffering heavy fire. This was what Stalin had been pushing for, in an effort to encircle Germany. Stalin was just one of three, also known as the "Big Three". One can gauge the threat of evil that Hitler was, by this normally unlikely alliance which included Franklin D. Roosevelt, Winston Churchill, and Joseph Stalin. So much had happened, including the bombing of Pearl Harbor. The time to sit back quickly became a thing of the past.

The "Big Three" had met in Tehran in 1943 to discuss how to go about their attack. They promised Stalin that they would invade France in 1944. This is what they eventually did do. Prior to this, and jumping back to Spring of 1941, Hitler was reveling in a supreme sort of triumph! The choice to attack his then convenient ally Soviet Russia, seems to be a huge part of his undoing. Some say it a gross miscalculation on Hitler's part, but others say it was part of his ideology. He had begun his career by attacking the Bolsheviks, and eventually wanted to find Lebensraum (living room) by colonizing the huge amount of land to the east. In part, it may have been personal paranoia, and the idea that someone like himself (Hitler) would eventually be betrayed by Stalin anyway. He thought Churchill was fighting hard because he hoped to bring Stalin on board with him. None of these ideas helped, and whatever the final reasons were, it was a bad decision on Hitler's part, but great for the rest of the free world! The European domination by Hitler from that point on, was about to really change. It had already begun to change by the time D-Day came around but this was the beginning of many more grueling days to come. The turning point was significant however. Operation Overlord was being put into effect.

Allies for a common cause

The Longest day, but still only 24 hours

The many, incredible heroic actions on D-Day helped to "save the day". So many more were involved in the success of D-Day than one might initially think. Many people from afar helped to make it happen as well. Those at airfields and on ships, offices, hospitals an at jobs as simple as answering telephones and those filling drums with gasoline all helped. Of course, none so much are to be honored as those that gave their very lives for the freedom of others. We should never forget those that simply disappeared as well on that terrifying and hellish day. Operation Overlord was successful because of all these people and more.

Once you realize all that happened on D-Day, you are tempted to think that the day was longer than most, and for many it surely felt like an eternity. It was a 24 hour day like every other. So many wanted peace for Europe, so many wanted their men and women to come home to their own countries, but many more days were to pass before it was over, in fact 336 more days. Still, without this first day of D-Day, things wouldn't have eventually changed for the better like they did. The English, Canadians, and American's and all the others that were part of the Allied forces, all wanted to go home and have the war be over. There were many more deadly days ahead, and it just boggles my mind to imagine even one of those days. Peace was worth the cost, and without that longest day, we wouldn't have it.

The Beaches Involved in D-Day

Many of us, when we think of D-Day immediately picture the beaches or at least I know I do.  The beaches involved in D-Day are Omaha Beach, Pointe du Hoc, Utah Beach, Gold Beach, Juno Beach and Sword Beach.  The United States fought mostly on Utah and Omaha Beaches.  The British fought on Gold and Sword Beach, and the Canadians fought on Juno Beach.

When I think of how the offense was carried out by the Allies and under the leadership involved, it is just mind boggling to me.  They all did such a tremendous job, and I feel so thankful and grateful towards those that served and gave so much for this and other causes.

The Allied Landings in Normandy and Southern France

This was to be an unparalleled combination of forces bent on stopping Hitler's domination. Directly across the Channel from England, British, American and Canadian forces on land, sea and in the air were planning their offensive attack. They were backed up by huge accumulations of supplies and reserves of men and all of it was done under the unified command of American General Eisenhower.

It was only a day and half after Rome as liberated, that D-Day occurred. General Eisenhower needed to do some recalculations, as the day that was originally agreed upon with the Russians needed to be put back some.  The original date was set back about 4 weeks in order to allow for more time to prepare. They were producing more landing craft, and also trying to coincide with the Red Army's summer offensive plans. There had been so much going on in so many places, that it is understandable to want to wait until they were more ready for such an assault.

The weather in early June was not the greatest, and the men out on ships were struggling with severe seasickness, as they had already been embarked. Other things came into play, like the moon and tides so time was growing short, and they needed to land. It was a huge responsibility for Eisenhower and the alliance was depending on him alone. He decreed the invasion should proceed, and that it did. Luckily, at the last minute the weather improved and while the sea was choppy, it wasn't so much so that they couldn't move the troops ashore.

The landings on the beaches began rather early on the beaches in an 60 mile arc of the Norman Coast. This arc included Cherbourg, and LeHavre and was close enough to the English coast to allow for air fighter cover during the whole time. This time, the men didn't need to fear the Luftwaffe, but rather the German artillery, barbed wire, and underwater obstacles and land mines. The Germans had been preparing these for three years in anticipation of just such an attack.

The casualties were heavy (and I think of the movie Saving Private Ryan here), and for a long time on that day, the outcome was something everyone wondered about. Fortunately, there was some German indecision that seems to have helped the Allies, by German commander Rommel. He was deceived about their intentions, believing that the Normandy landings were just a distraction, and that they would really be coming in where the Channel was narrowest near Calais. So his armored forces were kept in reserve until it was too late. When they did finally begin to move, the French Resistance kept them to a slow crawl.

The D-Day attack relied on an intricate multi-part attack. There was a long period of aerial bombardment in the weeks leading up to June 6, 1944. These attacks were followed by further air attacks German positions in the early hours of D-Day. It was around 0500 hours, that the navy guns started their hammering of the Germans. Later, the amphibious landings of course, and the airborne landings were other ways the men came on land to fight. These parachuted in or came in on gliders. Paratroopers were getting prepared to do their part as well on June 5.

The planes involved in the night raids prior, are U.S. C-47's (Douglas-3s, adapted for military use), U.S. B-17s, B-24s, and British Avro Lancasters. Below some of these, you could find B-26 Marauders doing their part. There were some interceptor fighters like the U.S. P-38, P-47 and the British Typhoons. These guys protected the bigger bombers.

Something to note, was that all Allied planes flying on D-Day were ordered by General Eisenhower to be painted with black and white stripes. They were to serve as distinctive markers for those in air, sea, and land to know they were friendly aircraft.

This Air Armada included the P-38 Lightning, the Lancaster, the B-24 Liberator, the Spitfire, P-51 Mustang, the Mosquito, the B-17 Flying Fortress, and the Typhoon.

USS Nevada on D-Day firing on positons at Utah Beach

The Navy did an outstanding job as well.  Operation Overlord's naval fleet was and still is the largest military armada ever assembled!  Most of its ships were from the United States and the Royal Navies but many other countries did their part as well.  There was naval help from Canada, Norway, Australia, Poland, France (the Free French) and other allied nations also contributed naval vessels.  There were 2,727 battleships, destroyers, minesweepers, cruisers, and large landing craft among the vessels.  There were over 2,606 smaller landing crafts as well.

The first day, over 130,000 men poured in. Within the week of D-Day, more than 300,000 British and American's were ashore. There were one million involved within the month. During June and July, Eisenhower's men consolidated their beachhead and increased in strength. A steady stream of supplies kept coming in through the artificial harbors that had been built off the beaches.

The German's were thrown back at first, more easily than expected. With Patton's breakthrough, the campaign on France became fluid, and within the next month and a half the whole country was liberated By September, the Allies crossed into Germany itself. Resistance movements from France, Italy, and Belgium that had grown up in secret during the later years of the German occupation, now came out and drove out the Germans and pro German collaborators.

With Patton's breakthrough, the campaign on France became fluid, and within the next month and a half the whole country was liberated

There is so much more that could be said, but you get the idea of the change that D-Day/Operation Overlord put into effect.

The Beaches of D-Day 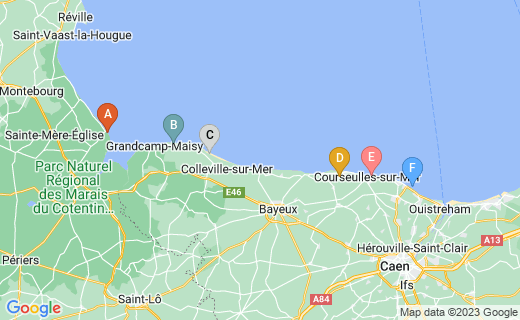