Denigration of the Dark-Skinned Black Woman in Postmodern American Society

The Blacker the Berry, the Sweeter the Juice?

We are in the 21st century. It was hoped that racial and ethnic division would have stopped or become next to nonexistent at this time. It was expected by many sociologists and social scientists that by the 21st century, society hopefully would be so diversified that race, skin color, and ethnicity would be inconsequential to say the least.

Even though this is the 21st century, racial, skin color, and ethnic prejudice have not disappeared. Incidences of racial, skin color, and ethnic prejudices have erupted from time to time. During the latter part of the 20th century, there has been a rise in nationalist and racist groups such as the Aryan Nation, neo-Nazi, and other racial supremacist groups who extol the so-called virtues of white supremacy. In some areas in postmodern America, racial and ethnic tensions are on the increase.

In all aspects of the media, even though there is the appearance of racial and ethnic diversity, people who appear more Eurocentric are more likely to be hired than their more racial/ethnic appearing counterparts. Homogeneity and Eurocentricism are the names of the game i.e. the less racial/ethnic a person appears, the less threatening to the powers that be he/she is.

It is well known in the movie and television industry, dark-skinned Black women are seldom hired in acting roles. If they are hired, it is usually in more negative stereotypical racial roles. Tom Burrell, advertising executive and author of BRAINWASHED: CHALLENGING THE MYTH OF BLACK INFERIORITY, maintained that dark-skinned Blacks are often cast in the roles of misfits while more positive roles would go light-skinned Blacks. Mr. Burrell cited the negative depiction of dark-skinned Black females in the movie PRECIOUS. He stated that dark-skinned females were depicted as lower class miscreants while their light skinned counterparts were cast in the role as saviours and professionals. Dark-skinned Black females are not viewed by the Hollywood powers that be as glamorous and desirable. Such positive roles are given to their lighter-skinned counterparts.

Even in the general culture, especially in certain aspects of the Black American culture, dark-skinned Black women are not viewed as attractive. They are often viewed as "ugly." Their skin-color and features are seen as abhorrent in this postmodern culture. In some families, many dark-skinned Black daughters, nieces, and relatives are told that they are not attractive enough and that they better be smart as there will be little or no suitors for them.

In the book,THE DITCHDIGGER'S DAUGHTER by Yvonne S. Thornton, M.D., her father exhorted her and her siblings to be smart because no man is going to come along and take care of them because they are not light-skinned. Many dark-skinned Black women were rigorously inundated by their families to be smart and to take care of themselves. Still other dark-skinned Black women are told that they cannot afford to be choosy regarding finding partners. They are often brought up to believe that they are "extremely lucky" if men choose them.

There are some families who praise and exhort the special and unique beauty of their dark-skinned Black daughters and relatives. These families are usually Afrocentric families who are intensely proud of their African culture. These families are often very few and far in between. Many Black American families, especially those who are upwardly mobile, want their daughters to conform to the Eurocentric standard of beauty.

The Eurocentric standard of beauty often have extreme deleterious effects on darker-skinned women whether they are of Mediterranean, Middle Eastern, Latino, Asian, and African descent. However, the Eurocentric standard of beauty has the most adverse effect on dark-skinned women of African descent. Many dark-skinned Black women feel negative repercussions from their family, peers, and society regarding their complexion. They are often seen as more threatening, less feminine, and less affluent than their light skinned counterparts.

Many dark-skinned women, including celebrities, recall that they were raised to believe that they were not beautiful and to be smart as their prospect of finding a partner is very slim to nonexistent. Even though in some Black females, the dark-skinned Black relatives are nurtured and told that they are indeed beautiful, there are other Black females who either knowingly or unknowingly convey negative messages regarding being dark-skinned to their female relatives, leaving an indelible mark on them. Black women must learn to embrace all aspect of their skin tones as one is just as beautiful as another. 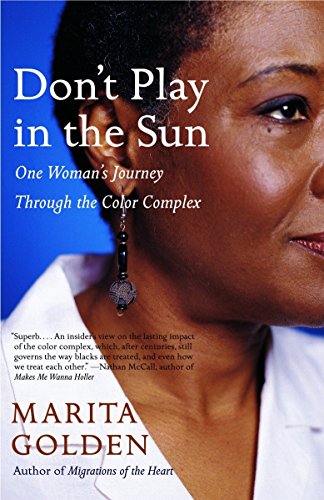 Don't Play in the Sun: One Woman's Journey Through the Color Complex
Buy Now 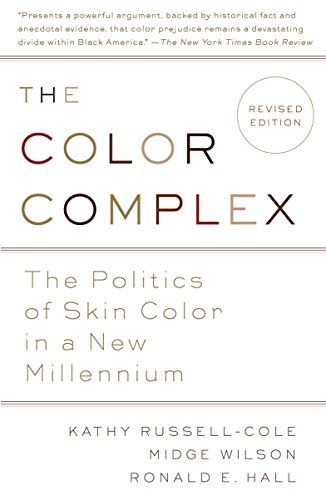 The Color Complex (Revised): The Politics of Skin Color in a New Millennium
Buy Now