It's still early in the wildflower season, even here in the Arizona desert, but the hillsides are bright yellow and the valleys are a mixed palette. This year is a good bloom: heavy rainfall ensured that even the thirstiest plants have come to life. The primary color is yellow, the purest and brightest of yellows -- not a butter nor a lethargic blonde, but an intense Day-glo yellow. Even as the early blossoms vanish, yellow will remain; the creosote bush will soon unfurl their buds, and the palo verde will awaken in an ocean of color.

Unless you pay close attention, you're likely to see nothing but the yellow-on-green tapestry of color. Like an Easter-egg hunt, the pastel shades lurk closer to the ground. With names like gentian, lavender and violet, those who have a purple passion are sure to be rewarded.

Is That a Pina Colada I Smell?

When I pull into my driveway this time of year, I have a strange habit of pulling over just enough to crush the pineapple weed blanketing the margins. Since childhood I've loved the delicate scent of newly-blooming pineapple weed. Also vaguely reminiscent of German chamomile, (and sharing many of the same medicinal properties), the pineapple scent that gives it its name is readily apparent. It's the rare "friendly" weed here in the desert, free of stickers or spines and non-toxic, to boot. When this annual plant has died off, it's easily raked up once it has thoroughly dried. What's not to love?

The pineapple weed has a distinctive cone-shaped flower that fascinated me as a kid. I would pluck them from the stem and roll them between my fingers, savoring the soft texture and the surprising scent. It wasn't until adulthood I learned their name. Pineapple weed. No wonder I loved that unexpected aroma.

Weeds of the West
Buy Now

Nothing means "Arizona desert" to this native quite like the creosote bush. Also sometimes referred to as the "chaparral" and several other names (gobernadora, meaning "governess," and "hediondilla," meaning "little stinker" among them), it is properly referred to as Larrea tridentata. Desert lovers thrill to awaken to the smell of creosote bush after a good rain: that's when the waxy-leafed plant releases its creosote-like odor.

The creosote bush is generous in its bloom, although it is yet early; soon it will be a lush yellow-green bush. It is more than just a pretty shrub with a pungent aroma, though: the creosote bush has several interesting properties that are just now being properly appreciated by Anglos. Some of the oldest living plants have been confirmed as creosote bushes, at over 13,000 years of age. The plant has long-standing medicinal properties once exploited by the indigenous peoples, and now explored by contemporary scientists. It even has a unique way of burning, low and slow.

Most Arizona dwellers appreciate the annual desert flower display, but few can name more than just the obvious choices: globemallow, Indian paintbrush, lupine, California poppy. Everything orange may be dubbed a poppy; everything red with a graceful stem, an Indian paintbrush. White, of course, is always a daisy, right?

There are thousands of flowering species, though, and infinite in their individual variations. 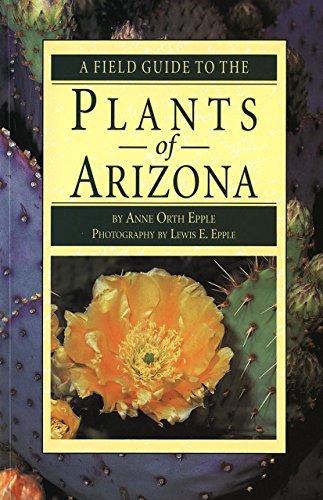 A Field Guide to the Plants of Arizona
Buy Now

The desert marigold is stunning. Stunning as in stop-right-there and take notice stunning. It is, however, a toxic plant. A member of the sunflower family, it is much smaller and lacks the prominent seedy face of its commercially-popular cousins.

Desert dwellers are said to have a faraway look in their eye. To some extent, it's true; herd animals of desert origin have large, bright eyes capable of gazing across miles of desert vistas for sight of potential predators. (To another extent, check out a javelina's eyes. Yep -- little and beady. It does sound poetic, though, doesn't it?)

Much of the year our eyes are drawn to the amazing mountain backdrop. This time of year, the rocky desert floor is a green meadow, and the visual background is softer and more appealing. Even something as forbidding as a barbed-wire fence makes a lovely image against the pineapple weed carpet beyond.

No, it's not just that it's five o'clock somewhere, and nothing tastes better on a warm desert afternoon than a margarita -- margarita is the Spanish name for daisy, and we have our share. Daisies aren't as prevalent as the bright-orange poppies, but they are a treat when they do make an appearance.

Mustard in Our Midst

London Rocket might be a curious name for a desert weed, since it is far from London and not at all rocket-like. Another user-friendly weed, it's a member of the mustard family and it is, as it turns out, from Europe. It's not, to many eyes, a wildflower at all, but just a rather persistent weed that grows into a two-foot tall annual. I have a certain fondness for it, though. First and foremost, the horses love it. Thanks to its lack of nasty prickers, it's easy to uproot and due to its size, it gives the horses a few seconds of happy munching. I find it a pretty weed, sweet-smelling and colorful. It belongs in every proper weed-garden.

The foliage might not be the deepest shade of purple, but the orange globe-shaped flowers on the globemallow make up for the rest of the plant. The globemallow grows into a hardy perennial that spreads out into a bouquet-like spray. The roadsides approaching our home are filled with them now, showing off their full bloom -- but here on the ranch, the plants are still shy about blossoming with just a lone flower here and there. Despite their beauty and the fact they're edible to livestock, they're known as "plantas muy malas" (very bad plants) by their Spanish name. It may relate to the irritation that the hairs on the leaves cause to eyes (human and animal), as another of the Spanish names for the globemallow is "mal de ojo."

Meet my nemesis, the fiddleneck. You might think, having read this far, that I am a weed fanatic. You might be right: I've read all 600+ pages of my beloved copy of "Weeds of the West" not once, not twice, but three times (not including browsing). Let me say it here and now: I do not adore all weeds. I despise, loathe, detest the dread fiddleneck.

Yet I have to admit that, from a distance, the curly-headed blooms are attractive, if only for their color. That's where my affection ends. The fiddleneck is invasive, persistent, and difficult to control. It has nettle-like spiny hair everywhere. It's tough to pull, and when you pull it without gloves (which I do, daily during the season), you end up with those nasty little prickers all over your hands.

That's not all. It is toxic to horses and other livestock. That's what gives rise to most of my animosity to the fiddleneck: poison my horses, and I'll never like you. Worse yet, they enjoy eating it. It won't kill them right away, or if consumed in small amounts; the toxicity is cumulative.

I love that the bloom in the desert rolls out in layers. Not only visual layers, with low-flying blooms basking in the shadow of taller, more peacock-like flowers, cottage-garden style. I like the temporal layers. First, the fiddleneck and London rocket; then the creosote bush and the brittlebush (which is just now awakening this year, many plants having been frozen back by the unexpected cold season we had); then the cactus will come alive in exotic fuchsia and apricot and magenta colored flowers; then the saguaros, with milky white blooms. Somewhere along the way the palo verde become truly breathtaking, and the bees clouding them are deafening.

One layer vanishes as another takes over, and one layer throws down seed for next year as the next bursts open to distract us. Then -- too suddenly, and usually quite abruptly -- it's summer. Someone flips the toggle switch, and we desert dwellers wake up cranky one morning. The abundant flora give way to the ill-tempered fauna of summer -- rattlesnakes, scorpions, and we irascible humans.

All rights reserved. No part of this article may be reproduced without the express permission of the author. However, links to this page may be freely shared.