Mount Brandon dominates the landscape, looming over the wild Atlantic of the Dingle Peninsula in County Kerry, Ireland. It is a region filled with legends, one of which puts forward a theory that an Irish saint discovered the Americas, nearly a thousand years before Christopher Columbus.

We know of course that the mysterious continents of North and South America were populated by First Nations tribes long before Caucasians "discovered" these lands, but this little-known account of an Irish monk sailing to the west and back is a charming and intriguing tale.

One of Ireland’s most revered peaks, Mount Brandon rises majestically from the chill Atlantic waters to cast its holy shadow across the far west of the peninsula. Known in Gaelic as Cnoc Bréanainn, meaning Brendan’s Hill, the name of this saint has been Anglicised to Brandon. The saint after which this peak was named, is said to have retreated to the mountain to seek divine inspiration before setting out on a legendary seven year voyage, to what some people believe to be America.

Mount Brandon is popular with pilgrims who brave the climb to follow a trail of white crosses that mark the steps of the saint himself to the top of Ireland’s ninth highest mountain. The area is scattered with the intriguing stone bee hive huts, or clocháns . Corbelled from dry stone, they are thought to be built to house the local early Christian community or pilgrims to the area, although they may also have been built by the local population who fled to more remote parts of the Dingle Peninsula to escape the Normans in the 11th Century [1].

Whilst there are several days throughout the year that are noted as being suitable days to carry out a devotional climb to the peak of Mount Brandon, the most popular and holy is the last weekend in July. This pilgrimage is widely believed to be pre-Christian in origin, and is considered to be part of the Lughnasa festival where a local god of the harvest named Crom Dubh was honoured [2]. Whilst Lugh himself is seen as the principal deity of this festival, it is not unusual for local deities to be included in the festivities. Crom Dubh is said to have dwelt near Cloghane; a small town near the base of the mountain. Another explanation is that the festival honoured Lugh’s victory over Crom Dubh (meaning the “dark twisted one”) on the peak of the mountain on the 31st July or 1st August [3].

If the records of Saint Brendan’s voyage were true, then it would re-write history.

Once Christianity became the widespread faith in Ireland, these old gods needed to be got rid of. And so the legends told how a local chieftain who dwelt in the valley of Lough A’Duin, named Crom Dubh, was converted to the new faith by Saint Brendan.

Born in 484 A.D. in Tralee, Saint Brendan is the patron saint of the Diocese of Kerry. Known as Saint Brendan the Navigator, or Saint Brendan the Voyager, this early monastic saint certainly had some adventures. Tutored by some of Ireland’s early Christians, he was ordered by Saint Erc to become a priest and spread the word of God. He travelled around the coast of Ireland, then further afield to Scotland, Wales, and even Brittany in France. Monasteries appeared wherever he landed, to spread the Gospel. These lands were not the only places that he sailed to.

According to legend, the saint built a traditional currach from wood covered in hides, and set sail for Paradise. He travelled with fourteen monks from Brandon’s Creek near the foot of Mount Brandon, to take the word of the Lord to an unknown continent in the west, referred to as “The Island of the Blessed”. He prepared for his voyage by fasting and praying for forty days and nights on the mountain, and then set forth in 535 A.D. to venture into the unknown.

“Having received the blessing of the Holy Father and all his monks, he proceeded to the remotest part of his own country, where his parents abode. However, he willed not to visit them, but went up to the summit of the mountain there, which extends far into the ocean, on which is ‘St Brendan’s Seat;’ and there he fitted up a tent, near a narrow creek, where a boat could enter. Then St Brendan and his companions, using iron implements, prepared a light vessel, with wicker sides and ribs, such as is usually made in that country, and covered it with cow-hide, tanned in oak-bark, tarring the joints thereof, and put on board provisions for forty days, with butter enough to dress hides for covering the boat and all utensils needed for the use of the crew. He then ordered the monks to embark, in the name of the Father, and of the Son, and of the Holy Ghost.” [4]

After sailing for seven years across uncharted waters, it is the local belief that he and his monks arrived on the shores of America. Amazingly, Saint Brendan returned to Ireland safely, and died in 578 A.D. It is not known what happened to his voyaging companions.

His adventure is recorded in the medieval manuscript, “Navigatio Sancti Brendani Abbatis”. There are many versions of the story describing the voyage of Saint Brendan. Some of these describe a different amount of monks travelling with him, others describe how they are pilgrims. One version describes how Saint Malo was aboard his vessel.

In the tale of Brendan’s voyage, several locations are described that have left people guessing. Were they real islands, or just fiction? One such place is an island of sheep, where the saint and his companions stay for a week during before the Easter period. From here, they travel to an island which is named Jasconius, where they hold Easter Mass. Brendan and the crew hunt whales and fish whilst here. After leaving this place, they find an island filled with seabirds, which is referred to as a Paradise of Birds. They also find a volcano, and visit a land of grapes where they stay for forty days. These references could certainly be interpreted as being locations such as Vinland, Iceland, Greenland, and the isles in between.

An attempt in 1976 was made to see whether or not the saint could have actually travelled to America and back in such a small and flimsy vessel. Determined to find out, Tim Severin, writer, and historian, built a traditional Irish currach. Naming the boat “Brendan”, he set off to see if it would make it to North America [5]. Amazingly, the vessel made it, and Severin wrote about his adventures upon his return in 1977, adding weight to the argument that the Irish might have discovered America before the Vikings! The voyage was as fraught with danger as Brendan’s, except Severin did not encounter any sea monsters; instead he suffered a puncture in the ship’s side whilst passing through icy seas.

Tim Severin built the ship using traditional tools from Irish ash and oak. It was lashed together with two miles of leather thong, and was wrapped in forty-nine tanned ox hides sealed with wool grease. The two-masted boat set sail from Ireland, via the Hebrides and Iceland, until they reached Peckford Island in Newfoundland. Many of the sights seen along the voyage convinced Severin that the descriptions of Brendan’s islands could indeed have been real places.

Tim Severin, writer, and historian, built a traditional Irish currach. Naming the boat “Brendan”, he set off to see if it would make it to North America

If the records of Saint Brendan’s voyage were true, then it would re-write history. But things don’t just stop with Brendan. Many consider his tale to be a Christian re-telling of the famous legend of the Voyage of Bran. Written down between 600 and 700 A.D, this Irish legend pre-dates the Navigatio Sancti Brendani Abbati and is believed to have inspired Brendan’s story.

In this tale, the hero Bran mac Feabhail set forth to find the Otherworld, land of peace and plenty. Here, none grow old or sick, nobody thirst or hungers, and it is always summertime. A woman of the Otherworld tells Bran to set sail for the Land of Women across the sea, and so he gathers a company of men and does just that [6].

There are even more similarities between Brendan’s voyage and the Voyage of Máel Dúin [7], a tale of a young man who discovers his true identity and sets forth on a journey of vengeance against raiders who wronged his kin. It is quite likely that the villains of this tale were the Vikings. This story was recorded towards the end of the first millennium A.D. and can be compared almost scene by scene with Brendan’s voyage. However, the reader will find an interesting blend of pre-Christian life blended with the new faith, with God featuring alongside druids.

We can see with the three texts that there has been a tradition of story-telling around a great voyage to a far-away land, with islands that might even be Iceland, Greenland, and a paradise that some believe to be the New World of the Americas. With each version, the story becomes more Christian, yet the core elements remain.

Whichever one is to be believed, they present historical evidence that the Irish have long been great seafarers, with many unknown lands being discovered and written about.

The Irish were sailing far and wide, long before Columbus reached America. They might just even have beaten him to it. 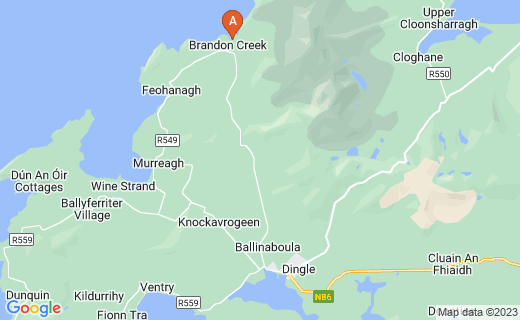 Following a road out of Dingle, you eventually reach the creek on the side of Mount Brandon. Parking is available, but there are no other facilities.