The HIstory of the Etowah Indian Mounds

The Etowah Indian Mounds, located in Cartersville Georgia, are believed to have been built by the early ancestors of the Creek Indians from the region. The mounds were built sometime around 950AD by one of the Mound Builder tribes of the Mississippi Culture. The mounds were created by moving the earth to build a large earthen mound structure. The tallest of the mounds, the temple, measures little over 60’ and covers about an acre of land at its highest point. Several other mounds surround the tallest one, and one additional of the smaller mounds also acted as a temple, and the third of the three tallest mounds, being the burial mound. The size of the mounds is very impressive, and according to the About North Georgia website, a journal by Elias Cornelius stated,” Such is the mound of High Tower a greater wonder I have not yet seen perhaps rendered more so by the obscurity in which every vestige of its history is lost That the Indians of the present race never constructed it is to my mind rendered certain for they have never had or known the use of those instruments which are indispensable in executing such a work And if they had possessed them they must have been far more enter prizing and industrious than their descendants now are to have accomplished...” (Etowah Historic Site)

The Chaco Culture was predominately active between the 9th and 13th centuries AD in the area known as New Mexico today. Noted for building Great Houses, which were expansive structures, constructed of stone, that contained 600 or more rooms and have multiple stories. They were built with a great attention to detail for solar, lunar, and cardinal lines of direction. Predominately used for housing, although there is some debate between archeologists as to whether entire farming communities lived in the Great Houses, or simply impressive structures for the use of trade and ceremonies.

Likewise, the two are similar in that they buried the highest class, or elite, members of their culture with riches, much like with the Egyptian pyramids. The Chaco is thought to believe that power ran through maternal bloodlines, and according to a recent discover of DNA analysis of nine individuals who were related maternally, “The discovery was made by performing DNA analysis of nine individuals who were buried in a crypt at Pueblo Bonito. The crypt contains thousands of beads made of shell and turquoise, and many archaeologists think that the individuals buried the crypt were part of an elite family that held some degree of power at Pueblo Bonito.” (Jarus)

Whereas, with the Etowah Mound Builders, the Chief Priests were the overseers of their towns and were, therefore regarded as their most elite citizens. Of the three main mounds, the burial mound has been excavated and restructured. During the archeological study of the burial mound, it was found that “Numerous copper tools, weapons and ornamental copper plates accompanied the burials of members of Etowah's elite class.” (Etowah- Wikipedia)

In contrast, the two differ because of the fundamental use of the structures. While early studies of the Chaco people believed, the Great Houses were used to house large populations in the farming villages, according to the National Park Service, “It is thought that the great houses were not traditional farming villages occupied by large populations. They may instead have been impressive examples of "public architecture" that were used periodically during times of ceremony, commerce, and trading when temporary populations came to the canyon for these events.” (History). Whereas, the Mound Builders of the Etowah region, led by their Priests, and therefore the mounds were a place of religious ceremonies and ceremonial burial. Therefore, while both structures were used for ceremonies and trade practices, the Great Houses of the Chaco were used for dwelling, whether by entire communities or by elite leaders, unlike the mounds of the Etowah Mound Builders, that were primarily used for their ceremonies and burial practices. 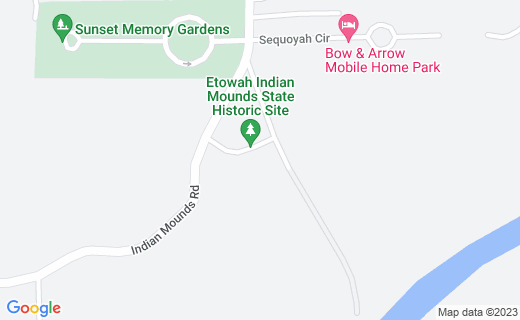 To learn more about the history of the Etowah Indian Mounds: