The Plains Indian tribes of North America are best known for their reliance on the American bison for food, clothing, housing, tools, and more, but in fact they ate a varied and interesting mix of wild fruits and vegetables in addition to the bison meat that was their staple food. The natural diet of the Plains Indians was so good, in fact, that in the early and mid-19th century, the overall level of physical health and well-being of the nomadic Plains tribes was the best in the world at that time.

Modern day wild foods enthusiasts and gardeners can enjoy some of the same health benefits enjoyed by the Plains tribes prior to their confinement on reservations.

Called tinpsila by the Lakota, pomme blanche or Pomme de Terre by the French fur trappers, and Indian Breadroot by later settlers, the Prairie Turnip (Pediomelum esculentum, or Psoralea esculenta) was the other staple food of the Plains tribes.

The egg-sized taproot of this perennial plant was harvested communally in June and July on the Plains. Children would be sent to find the next plant while their mothers dug and harvested the first. Prairie turnips were then peeled and fried, boiled, dried, pounded into flour, or eaten raw, among other methods of preparing it. It could also be dried to store for later use, and the flour was a common component of pemmican.

American groundnut (Apios americana) is an edible root native to wet areas of the prairie and Eastern woodland regions of North America. Similar to baby potatoes in taste, though larger, groundnuts were harvested in winter and eaten boiled, roasted, fried, or raw. They were also valued highly by white settlers - so highly, in fact, that some New England towns during the colonial period made it illegal for Indians to dig groundnut on English land.

Although it is now cultivated domestically around the world, Jerusalem artichoke (Helianthus tuberosus) was originally native to North America, where it was found in most regions, including the Plains.

This perennial sunflower produces edible tubers, which can be harvested in fall after the stem and leaves have died back without killing the plant. they can be eaten raw, boiled, fried, pickled, and more.

The related Maximilian sunflower, also native to the Plains and prairie regions, can be used in the same way.

The most important edible wild fruit of the Plains and prairie regions, the Chokecherry (Prunus virginiana) was the third main staple food of the Plains Indian diet.

The Lakota and Dakota called the first full moon after the Summer Solstice Black Cherry Moon and gathered together at harvesting grounds to collect and dry the berries, to be mixed with bison meat in the preparation of wasna, or pemmican.

If you are interested in gathering these berries, be aware that the seeds are toxic and should not be eaten.

The chokecherry is easily grown in home gardens and is an especially good erosion control plant. It is also an excellent plant for wildlife, especially birds, who use it for both food and shelter.

The chokecherry is similar in habits and appearance to red and black chokeberries (Aronia arbutifolia and Aronia melanocarpa) and are sometimes confused by nurseries. Chokeberries are native to the Eastern United States, including parts of the tallgrass prairie region, and also produce edible fruit which, though bitter, is valued for its nutritional properties.

August was the Red Plum Moon to the Lakota, who feasted on the sweet, juicy fruits of the Wild Plum (Prunus americana) at this time. The Lakota and other tribes enjoyed wild plums fresh or dried. They remain popular with residents of the Plains today, and are also made into jams, sauces, pies, and more, much like domesticated plums.

Wild plums can easily be grown in home gardens for their delicious fruit. They are especially well suited to the Plains due to their hardiness and drought resistance, and they also attract wildlife such as wild turkey.

Though more commonly used as an ornamental today, the Soapweed Yucca (Yucca glauca) was eaten by Plains tribes, who roasted the stalks and ate the flowers fresh.

Other yucca species are also edible. 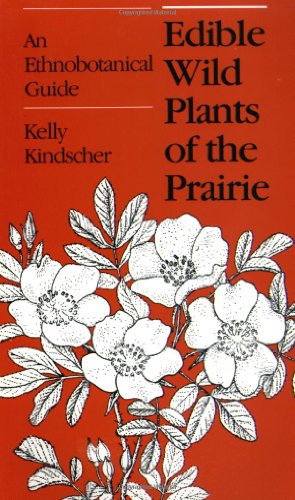