Birmingham In The Seventeenth Century 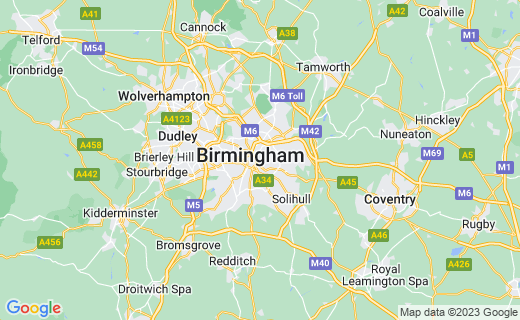 The History Of The English Civil War

At the beginning of the English Civil War, Birmingham and an area of the West Midlands known as the Black Country proved to be one of the few areas in the country capable of producing the military equipment requited for a successful Royalist campaign. King Charles I had already drastically reduced his options by failing to secure vital military deposits in Portsmouth and Hull. Therefore he was left perilously short of essential supplies, such as swords, pikes, guns and their powder. Fortunately for him, the West Midlands, then part of the ancient county of Worcestershire, proved more than capable of satisfying his needs. Cannons were acquired from the town of Dudley, known mostly for its formidable castle, while the powder was acquired from nearby, in Stourbridge. In the Civil War era, numerous small forges lined the many brooks that flowed across the north of the county. And consistently, they produced an array of blades and pike heads. However, Birmingham managed to incur the anger of the King through a man called John Porter, a renowned sword maker, who lived and worked in Worcestershire, but conducted most of his business in Birmingham. When Charles expressed interest, Porter flatly refused to deal with the King regardless of any offer he received, stating that he would never supply 'that man of blood' or any of his sympathisers.

Fortunately for Charles, he had among his supporters, a Colonel Dud Dudley, a talented metallurgist, who had developed a technique of smelting iron by using coal. He claimed that he could produce great quantities of all purpose iron far quicker and cheaper than more traditional methods. Charles enthusiastically employed Dudley's innovative methods, giving him an early advantage over the Parliamentarians.

Birmingham further incurred the anger of Charles in October 1642, when the King and his army made the crucial mistake of passing through the then town en route to Edge Hill from Shrewsbury to do battle. As he marched through the narrow streets, the townspeople seized some of his carriages, some of which contained valuable Royal memorabilia. Any booty seized was quickly sent to Warwick Castle, then a Parliamentary stronghold for safekeeping. Throughout the first year of the war, the locals, known as Brummies frequently apprehended all Royalist messengers and anybody suspected of harbouring Royalist sympathies. They also frequently attacked small parties of Royalist soldiers unfortunate enough to find themselves in the town. Those they didn't kill were sent in shackles to the heavily fortified city of Coventry- this is probably where the proverbial expression 'send him to Coventry' originated from.

Charles' reign was replete with small acts of vengeance against those he felt that had wronged him. Birmingham had already wronged him twice, so he felt the need to teach it and its people a lesson. He ordered Prince Rupert of the Rhine to punish Birmingham, mainly for the seizure of his Royal coach, which he considered a grave insult.

As well as punishing Birmingham, Rupert was ordered to capture the nearby town of Lichfield and clear as much of the surrounding countryside as possible. In order to accomplish this, he was given 1200 mounted cavalry and 700 foot soldiers.

So on the 29th March 1643, a Wednesday, Rupert and his men left Oxford, marching briskly northwards. By dusk that same day, they had reached the village of Chipping Norton. A day later, he was less than 25 miles away at Shipston on Stour. On Good Friday (31st March) he reached the last major town before his final destination, Stratford on Avon, famous above all of course, for being the birthplace of William Shakespeare. After taking the time to rest overnight, he pressed onwards, reaching Henley in Arden on Saturday. Once there, he elected to remain in the small village until Easter Monday, so as to allow his men one final rest before the final push towards Birmingham.

Now Birmingham, unlike its close neighbour Coventry, was virtually without any kind of garrison, due to it being unsuitable for fortification in terms of its layout. However, those drawbacks didn't stop the townspeople from barricading either end of the town, by raising slight earthworks. They were undoubtedly crude, but they were a powerful symbol of Brummie defiance.

So, on the 3rd April, Rupert embarked from Henley in Arden, up what is now the Stratford Road. After passing through the village of Shirley, he entered Worcestershire, and upon doing so, he turned sharply northwards towards the heart of Birmingham. However, at Sparkhill, where the roads to Stratford and Warwick conjoined, he found his path blocked by raised earthworks. The reality though that there simply wasn't enough military manpower to defend the town from Rupert. There was a small company of infantry under the command of Captain Richard Greaves. He did receive support from Lichfield, but all in all he had less than 200 men at his disposal. Rupert, perhaps justifiably believed that his large force would be able to easily smash the exceptionally small garrison. Therefore, he felt confident enough to send forth his Quartermaster to acquire lodgings and to assure the locals that as long as they remained compliant, then they would no suffer consequences of their past misdemeanour's. However, the locals were unrelenting and flatly refused the Prince's request and moreover proceeded to shoot down the Quarter Master in cold blood from the comparative safety of their crude barricade.

At three in the afternoon, Prince Rupert discovered that the so called 'sturdy sons of freedom' were determined to put up a fight. This stance was actually contrary to the general opinion of the Parliamentarians and the more leading civilians of the town. Finding that he had little alternative, given the stubbornness of the ordinary folk, Rupert ordered the defences to be assaulted at once. In theory, the Royalists should have had no difficulty in smashing the earthen defences. However, behind those defences were a handful of musketeers. As the attackers advanced, the muskets opened fire; so great was their effectiveness, that the Royalists were compelled to fall back. And when they attempted a second assault, it met with similar results.

For Rupert, it was sheer humiliation. Any thoughts of mercy had long since vanished, there was no way that the Prince could allow himself to be defeated in battle by a handful of determined Brummies. A handful of Rupert's men saw an opportunity to bypass the defences by traversing across the fields, and thus attack the defenders from the rear. The tables now turned dramatically, the defenders were unable to suppress a direct assault without the aid of their earthworks, and thus fled into the town. The Royalists pursued, but the Brummies still showed defiance by firing sporadically as they retreated. However, this only served to further anger Rupert's men who proceeded to set fire to some of the town's dwellings, and in no time at all, a steadily growing fire was threatening to engulf the town. As the Royalists advanced, so the Brummie resistance lessened, with even the most determined of fighters sensibly deciding to flee.

But the fight was far from over. Captain Greaves saw this as the time to rally his troops at the northern end of the town, wheeling them round in formation, he charged ferociously at the scattered Cavaliers. The Royalists recognising the futility of standing up to a cavalry charge, fell back in good order, but the Roundheads did manage to claim the life of Lord Denbigh, knocked clean off his horse, he would die from his wounds soon afterwards.

Greaves' decision to charge carried an ulterior motive. He wanted to give his foot soldiers a chance to flee without them being pursued themselves. Thus, he did not build on his successful charge, instead he retreated himself, back towards Lichfield, leaving the townsfolk at the mercy of the enraged Royalists. Who showed no mercy as they rampaged through the town, leaping hedges, ditches and slaying townspeople as they went.

For Rupert, there was no time to celebrate victory. Just twenty four hours later, he marched north to Walsall, and reached Cannock a day after that. Then, after three days of rest, he marched onwards to Lichfield, and proceeded to lay siege to the heavily garrisoned town.

Sadly, all traces of the Camp Hill site have long since passed away, claimed by the almost continuous expansion of the now city of Birmingham. There was however, until very recently a pub on Camp Hill itself called 'The Old Ship,' that was, according to local legend the headquarters of Prince Rupert on that fateful Easter Monday in 1643. It survived into modern times, and thus provides the only photographic evidence of a battlefield relic.