Externsteine is an unusual sandstone rock formation near Ostwestfalen-Lippe in the northwest of Germany. It is unique among other monolithic sites in Europe because it is a natural formation that has been altered by human hands. Whereas Stonehenge was built by people, Externsteine was built by Nature and then manipulated by people.

It is unclear who were the very first people to use Externsteine. There are many theories, and no clear consensus among researchers. What everyone does agree on is that the site has been used by many different groups for strikingly different purposes throughout the ages.

Externsteine From The Air

Was Externsteine used as a pre-historic sacred site? Did Neolithic people worship there? Did it have an astronomical function like other ancient European sites? The answer to all of these questions is: maybe.

Theories abound about Externsteine's use as a sacred place of worship and sacrifice, as well as an astronomical observatory. Paleolithic and Mesolithic stone tools have been found at the site giving some credence to the theory that pre-historic people were, indeed, present at the location. But, there is not enough evidence to conclusively determine their activities.

Some theories of Externsteine's early use include: 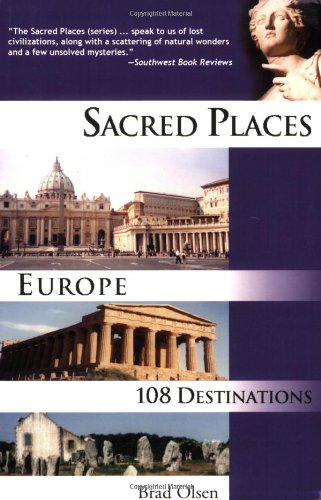 Some believe that Externsteine was a center for Saxon pagan rituals. Like many other European pagans, Saxons were known to gather in nature to worship their gods. Just as the Celts, Balts, and Slavs kept sacred groves, so, too, did the Saxons. The towering monoliths would have provided a sense of awe and an allure of the supernatural. It seems a natural place for any Earth-centered religious group to worship.

It is said that when Charlemagne forcibly converted the Saxons to Christianity, that he destroyed pagan temples and banned the use of sacred sites such as Externsteine for such practices. However, we are again left with little evidence to confirm this story. Based on what we know of pre-Christian Saxon worship, and of Charlemagne's conversion campaigns, the theory is plausible, but the evidence simply cannot substantiate the theory.

We do know that there were Saxons in the region where Externsteine is located. We also know that Charlemagne reportedly destroyed many Saxon pagan religious sites such as sacred trees, groves, temples, and pillars known as Irminsuls. An Irminsul was a tall wooden post erected in areas of worship. Scholars can only speculate on their meaning, but many think that it may have a connection to Yggdrasil, the Norse World Tree, or that it may have had a connection to a lower god called Irmin. It is also speculated that Irmin was a "kenning" (or nickname) for another major deity such as Frey or Odin.

Externsteine as a Christian Sacred Site

It is recorded that in the year 772 Charlemagne ordered the destruction of a very important Irminsul in a key Saxon religious and cultural center near Obermarsberg, Germany. This is relevant because the Christian relief carved into the rock at Externsteine is said to depict the triumph of Christianity over Saxon paganism. Below the cross stands a withered and wilted stump of a tree, which is said to represent the great Saxon Irminsul.

Due to the reliefs carved into sections of rock and other carvings of religious significance, we know that Externsteine was certainly occupied by Christian monks in the Middle Ages. Precise dates of the occupation are unclear.

Barbarian Rites: The Spiritual World of the Vikings and the Germanic Tribes
Buy Now

Externsteine and the NSDAP

When the National Socialists rose to power, they made an effort to elevate German culture and heritage. This is a complicated subject to discuss. German culture had already been vilified after their role in World War I. After which heavy reparations were placed upon Germany by the Allies. The burden of war reparations fell directly to the people. So, the when the Nazis emphasized the positive aspects of Germanic history, it was very much needed and appreciated by a now impoverished and depressed population.

This helps to explain how and why the National Socialists were able to win over Germans so easily. It is not that they all had an ax to grind against Jews, Gypsies, and other minority groups. The NSDAP filled a need that all of us have: the need to feel valued and important.

By celebrating German culture, the National Socialists made Germans feel proud of their heritage, something they hadn't felt in quite some time. And now, unfortunately, many aspects of German heritage have become so twisted up with propaganda that the general public equates these elements as part of Nazi-ism.

The swastika is a great example. The swastika is an ancient symbol of the sun that dates to pre-history. Use of the swastika ranges from India all across Europe and has even been found on Native American art. It is a sacred symbol to Hindus and Buddhists, and was sacred to pre-Christian Europeans from East to West. However, today the symbol is seen almost exclusively as a symbol of the Nazis.

Unfortunately, this happened with Externsteine as well. It became a place of interest to the National Socialists, who viewed it as a bastion of ancient German history, which tainted it's reputation for many years.

The Swastika: The Earliest Known Symbol, and Its Migrations
Buy Now

The Spiritual Traveler: The Guide to Sacred Sites and Pilgrim Routes in Britain
Buy Now

Happily, other groups have been interested in Externsteine in recent history, one of them being neo-Pagan groups. Just as contemporary pagans and Druids gather at English sites like Stonehenge and Avebury, modern German pagans gather at Externsteine to celebrate the seasons today.

Although there is much debate and little certainty on how, when, and why Externsteine has been used in the past, one thing is certain. It almost always has been and probably always will be a very special place for the German people. Externsteine is a place for Germans of all ages to gather to remember their past and look toward their future. It symbolizes both high and low points of German history. It also stands as a reminder that the German people will not only survive, but they will thrive. As history throws its curves, Externsteine remains standing tall. It will remain long into the future, when people will continue to wonder just what it was used for today.

A Video Walk Through of Externsteine