I spent my early childhood in Wisconsin and another four years when my husband's job took him there. It is a beautiful and scenic state!

Back when I was a child some of my best winter time memories came from spending time ice skating as one of our family fun days. I am certain that my parents were interested in finding good and healthy outdoor activities for kids but it was equally fun for them.

My fraternal grandmother lived on Okauchee Lake in Wisconsin in the home in which my father was born.

Every summer we had a great time swimming in the lake. When the ice became thick enough in the winter that is when a special kind of fun began.

First my parents would have to shovel and clear a space of snow on the frozen ice to create our ice skating rink. As we kids, my two younger brothers and I got old enough we would help them clear the ice.

This was such an exciting time for our entire family!

Back in those days of the mid to late 1950s the the ice skates were different from the ones commonly worn today. They did not come all in one unit.

We were bundled up in our layers of clothes with snowsuits over the top and our pant legs were stuffed into the tops of our boots. Onto the bottom of our boots would be clamped the ice skates.

We kids would be helped with the proper fitting of the ice skates to the boots and then the fun would begin. All of this took some time to accomplish!

The photo below shows an earlier version of how ice skates appeared in the early days.

My Dad did most of the clearing of the ice and since he had grown up living on a lake and was naturally very athletic he would be the first person on ice skates.

Good thing we had many layers of clothes on! As I recall as we kids wobbled onto the ice we spent as much time on our rear ends as up on our skates especially in the beginning of each winter ice skating season.

We were always so excited when we knew that we were going to get to go ice skating!

My mother was never a great ice skater like my dad was. She used to tell me stories of their growing up near Washington Park in Milwaukee, Wisconsin and doing some ice skating on the frozen lake in the winter.

Her brother who had a paper route purchased his own good ice skates with his money and he exhibited an ease of skating that my mother and her sister did not share. My mother even remembered the longer tips on his racing skates.

One sister skated with her ankles bowed outward riding on the edges of the skates that way and the other sister (my mother or aunt) skated just the opposite way with the ankles bowed inward. They must have been quite a sight!

When my mother was still alive and talking by telephone to her sister they had a good laugh about those days. Needless to say when it came to teaching the three of us kids how to ice skate my dad took over!

Learning How to Ice Skate

I really don't know the specific teaching methods that my dad used in teaching us how to ice skate. There are ice skating schools in existence for those interested in learning proper techniques.

My dad undoubtedly learned by trial and error with perhaps some older family members teaching him? I really don't know those particulars since his dad died when my father was only 7 years of age and I never saw my grandmother ice skate. Nonetheless he was an expert in my eyes!

Besides skating going forward he impressed us by doing fancy loops and also skating backwards which is something we kids never learned as our ice skating days ended in 1960 when our family moved to Texas.

I still remember the thrill of being let go and actually being able to not only stay up on those ice skates but actually learning how to propel ourselves forward. Memories like those tend to stay with one just like successfully riding a two wheeled bicycle for the first time solo.

Oh yes there were plenty of falls on the ice but much accompanying laughter also. Had we stayed in Wisconsin longer, perhaps we would have learned to do a bit more on ice skates like my dad. Today if I tried (and which at my age I have no intent) I would probably end up in intensive care. Haha!

Ice skating rinks can now be found in many places outdoors seasonally. Rockefeller Center ice skating comes to mind and much Christmas ice skating is done during this time of year in New York.

Houston's Discovery Green has an outdoor rink for ice skating fun this time of year. Obviously the ice is created at some expense by the park department as our temperatures are not cold enough for the ice to form naturally.

Houston's Galleria which is an indoor mall has had an ice skating rink that was quite the attraction when it was new. It continues to be frequented all times of the year for kids and adults alike and visitors can look down upon the ice rink from the 2 upper levels of the mall with specialty stores and restaurants surrounding the ice rink.

Naturally there are many other ice rinks in other places.

People in colder climates can even have ice rinks in their backyards nowadays with products that can be purchased to create those environments. Don't live on a lake? No problem!

Ice skating was definitely one of the fun things to do in Wisconsin where I grew up as a child.

But whether one lives in a cold climate or a warmer one where lakes and rivers do not normally freeze in the winter, with the prevalence of seasonal outdoor ice skating rinks as well as indoor ones, ice skating continues to be something in which to engage your kids and entire family for that matter in fun filled activities that will create memories of your own.

Besides having fun, it is great exercise! 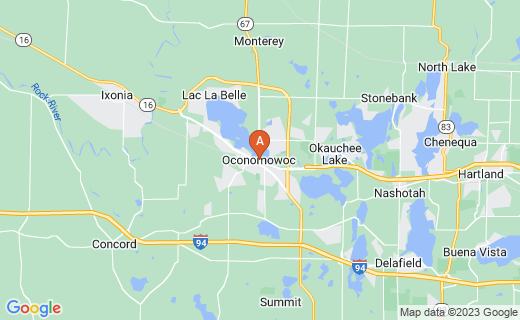 Place where I grew up as a child. Notice all the lakes?

Did you ever ice skate?